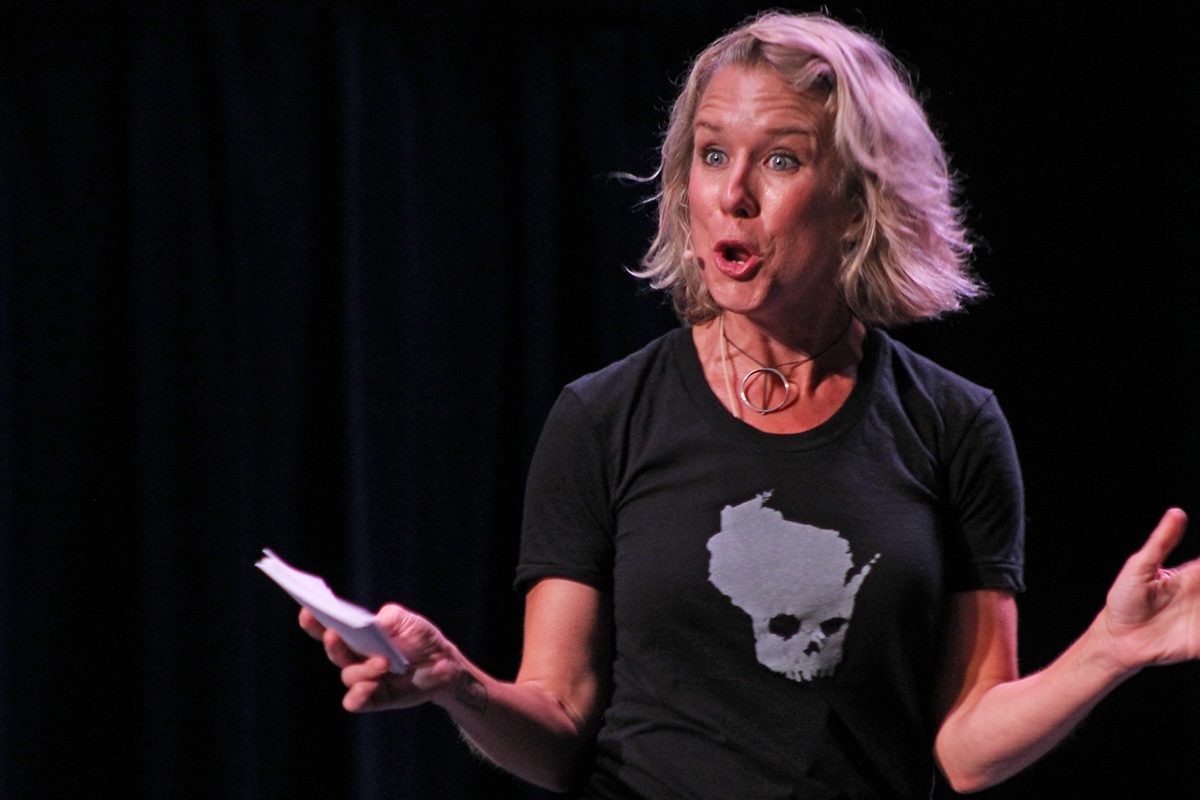 Comedian Lauren Weedman takes the stage in UW-Eau Claire’s Schofield auditorium to share her experiences while in Eau Claire for her improv show.

Schofield Auditorium filled with laughter and applause as a Los Angeles-based comedian took the stage to deliver a comedy show poking fun at the city of Eau Claire.

Lauren Weedman, an actress, author and comedian, began her improv comedy show with a video of her dancing to Mercy by Duffy in various places around Eau Claire, including shots of Owen Park, Nelson Cheese Factory, Phoenix Park, Banbury Place and more.

Weedman’s tour is for her series called the “City Show,” where she spends a week in a city gathering material in categories of experiences, people and places and conversations. Her comedy show was a part of the Artist Series at UW- Eau Claire.

She said her City Show series started as an assignment on encounters she had on the streets in Portland but then realized she wanted to keep doing it.

“I still like to travel and perform,” Weedman said, “and so what I thought I would do is ‘I’ll just go to a place and do a show, I’ll be there for a week and during that week’s time I’ll gather material.’”

Arriving last Tuesday, Weedman and her friend, Josh, who took videos and pictures for her documenting, started to sightsee and explore downtown Eau Claire.

She continued to share stories of her experiences like her first sighting of an Albino squirrel, meditation with horses, a night out on Water Street, the Homecoming football game and a day of pheasant hunting.

As she told her stories she played background music to add to how she felt in the moment. She played “Go Go Gorillas” by The Shandells to start off her experiences on the first day, “Teach Your Children” by Crosby, Stills & Nash while visiting Acoustic Cafe and “HUMBLE.” by Kendrick Lamar for the night out on Water Street.

After going to the “Heart of the City” —  Barstow Street —  and telling people she’s not from here, she had many of the same conversations with locals.

“Bon Iver came up in conversation every 15-20 minutes after they asked me if I’ve heard of the band,” Weedman said.

As Weedman told the audience of what her days were like while in Eau Claire,  she said she began to fall in love with the city the more time she spent in it.

“I could live in Eau Claire, but then I’m like, ‘no, I’m a nightmare,’” Weedman said after describing her lifestyle in LA.

Weedman was careful to emphasize the intention of the show was not to mock the city and the people living there as she told a joke of a woman she overheard say, “Oh jeepers,” while in Eau Claire.

“It made me more aware of what’s around town,” Schenk said.

Students found what she talked about was relatable, from going to the football game for the halftime marching band show to  people apologizing more often than in LA.

“We also left (the football game),” said Dana Athmann, a first-year communications student. “It was worth it for the band.”

Hannah Degroot, a first-year psychology student said she agreed that Midwesterners apologize too often when there isn’t a need to. Degroot said she’d like to have Weedman return for another show.

“Bring her back,” Degroot said. “I mean you can’t really do that because it’s improv, but she’s just really funny.”

Weedman ended her show by dancing off stage to the same music she had in her intro video.