Blugold gets his images featured in USA Today College Guide 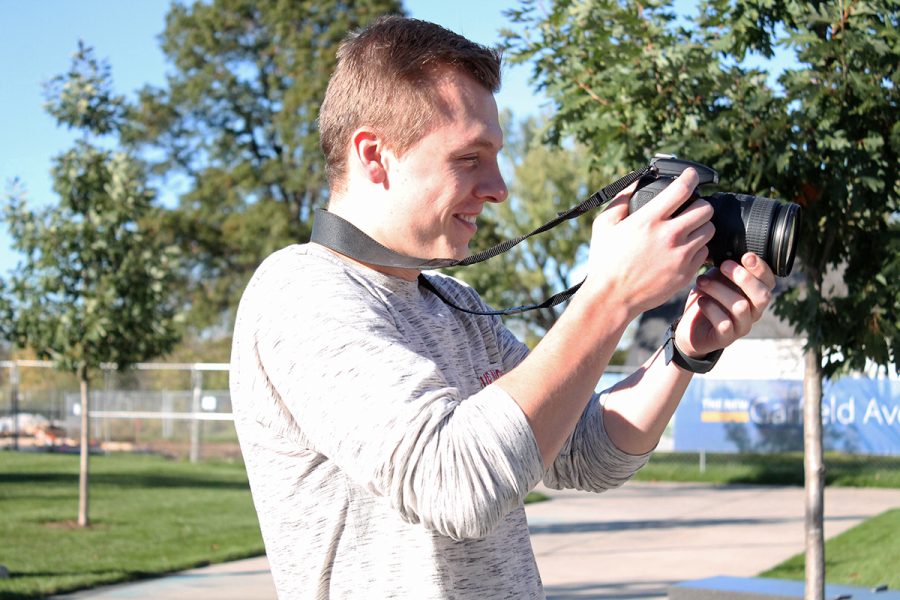 Matt Schrupp, an Eau Claire senior, shoots images of campus everyday where some of his work has been featured in the USA Today College Guide 2018.

UW-Eau Claire’s “most beautiful campus” continues to uphold this title thanks to the help of Matt Schrupp, a senior at the university studying information systems.

Schrupp works for the Learning and Technology Services (LTS) photography team, and he said he has a passion for shooting photos of Eau Claire’s campus.

His work does not go unnoticed. Not only have his photos been featured on the UW-Eau Claire Instagram page, but Shrupp’s work has won a spot in the USA Today College Guide contest for the second consecutive year in a row.

USA Today hosts a highly competitive annual national photo contest to gather images to feature in its college guide. The guide profiles nearly 500 colleges and universities across the country.

Schrupp was fortunate enough to have two of his photos featured in the 2017 magazine last year, which took both second and third place.

This year, for the 2018 guide, Schrupp submitted a photo of Little Niagara River with Davies Center in the background during wintertime, which filled two full pages of the magazine.

The second photo to be featured is well-known on UW-Eau Claire’s Instagram page: A captured scene of campus with lightning striking the background.

“I’d like to think I have grown as a photographer since last year in a small way,” Schrupp said. “I’ve grown in noticing the tiny details that can make the image that much better.”

Schrupp said he has also grown in the business aspect of photography over the past year. He said he didn’t know exactly what he was doing when he tried to make money from his work.

“I dropped more than half my savings on a camera so I was trying to make my money back by selling, but I didn’t really know how to do so,” Schrupp said. “As the year went by, I kept learning more and more on how to sell my images, how to price them and marketing everything.”

He makes money by selling his images on his website or by leasing them to people or businesses.

Schrupp said he has never taken a photography class and has taught himself everything he knows with the help of those on the LTS photography team. He said he gives “props” to the guys who work there because not only have they become great friends, but if Schrupp ever has a question, they make sure they try to mentor and teach him as much as possible.

One of the campus photographers from LTS and a mentor to Schrupp, Bill Hoepner, said he is proud of Schrupp for earning this great achievement of having his images featured in USA Today.

“I think it’s fantastic that he was featured a second time,” Hoepner said. “He is always trying new things and likes to accomplish new challenges by stepping outside his comfort zone. He is a wonderful asset to the LTS photo team.”

Schrupp said he carries his camera with him everywhere he goes so he is always ready to snap a photo when he sees an opportunity.

One of his favorite images he has shot on campus is a picture of a sunset lighting the sky completely red. The university posted this image to its Facebook page, where Schrupp said it was shared over 700 times.

Schrupp takes pictures of campus every day and will shoot images he likes but also keeps the magazine and its standards in the back of his mind. He said he will try to submit pictures he thinks the magazine will approve of and like to feature.

In order to have an image featured on the cover of the magazine, the picture should be formatted in portrait mode, something Schrupp said he needs to improve upon.

“I have to work on being able to take pictures in the portrait mode rather than always landscape. I took one on the Water Street Bridge where I made sure it was vertical, and I thought they (USA Today Magazine) would choose this one but they didn’t, so I definitely need to improve on my portrait mode skills,” Schrupp said.

Although photography is just a hobby for Schrupp right now, he said is very passionate about his work.

“I think it is a fun challenge to make money from it. If I take a good enough picture where someone wants to buy it, then I would consider that a success,” Schrupp said. “I also like to show people how the world looks through my eyes because it is fun to show my perspective.”

Schrupp will continue to put his photography skills to use as he graduates this May.