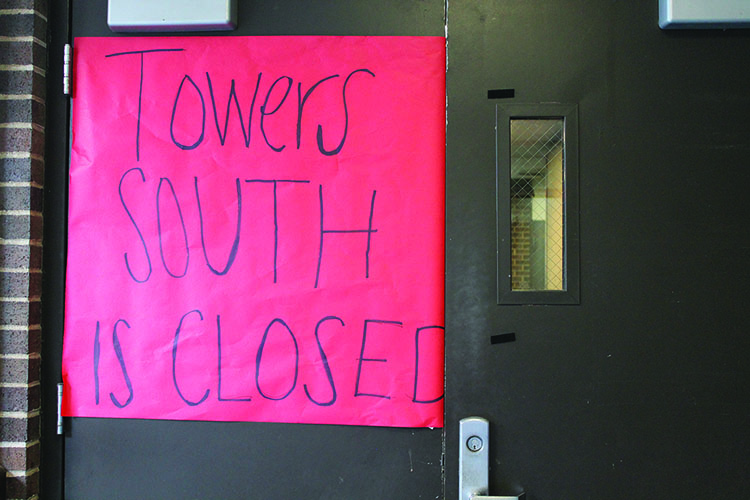 Renovations on Towers South is scheduled to begin in October and are expected to be completed fall 2018.

Since its opening in 1967, Towers Hall has become home away from home for some  students. During the renovation project scheduled for fall 2017 through fall 2018, Towers South will be closed and unable to house students.

According to a press release from UW-Eau Claire, over the summer the Towers renovation received approval from the State Building Commission to increase its budget by $3 million. The estimated cost of the renovation was $32.9 million, but because the cost was calculated in 2012, the prices for labor increased and the contractors came back with higher estimations.

Quincy Chapman, the director of Housing and Residence Life at Eau Claire, said the budget increase wasn’t a surprise.

As of now, Towers South is empty and waiting for construction workers to arrive in October to improve the living and public spaces to cater to the needs of students.

Chapman said there were two general goals with the Towers renovation.

“One was to significantly improve the community gathering spaces for students for both towers,” Chapman said, “and the other was to make the bedrooms and bathrooms more comfortable.”

Chapman said the project will make for a more comfortable living space for students. Every floor will have a gender-neutral bathroom where the overflow rooms used to be.

Towers will also go from having one bathroom that meets the Americans with Disabilities Act (ADA) guidelines to 18 of them. Every floor will have a small study area along with several on the first floor and in the basement.

Other improvements include a cafe on the first floor, relocation of the front entrance to the hillside of the building, new elevators, air conditioning throughout the entire building, two patios and gathering areas with computers and printers.

Glass cases will display student artwork to bring together a community aspect. Chapman said a potential new position for students is a student art curator.

Despite the renovations to Eau Claire’s largest residence hall, the housing hunt hasn’t been affected.

“I didn’t have a problem because I started looking early for off-campus housing,” Olson said, “but I know people who did.”

With the renovation, there are roughly 550 students who cannot live in Towers South this year.

“Our biggest issue is housing shortage with two-person dorms, and (we) have had this issue for the last 30 years,” Chapman said.

Following the renovation, the residence halls will be able to house the same number of students. It is expected to be completed on time.