Community comes together for Alzheimer’s Walk 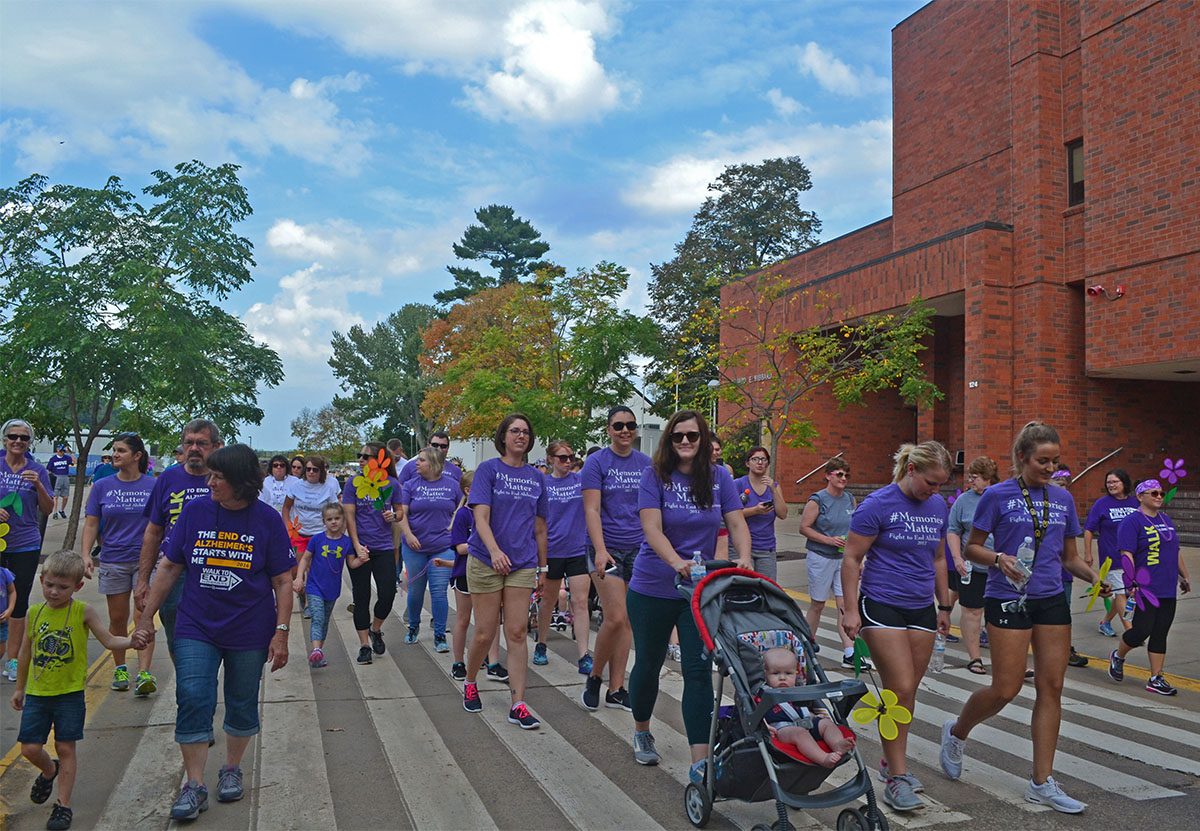 UW-Eau Claire hosted the Walk to End Alzheimer's on Saturday to raise awareness of the disease.

More than five million Americans live with Alzheimer’s in 2017; by 2050 it could be 16 million, according to alz.org. The worst part for these people is there is no cure.

UW-Eau Claire hosted the Walk to End Alzheimer’s last Saturday morning. It was a three-mile walk with a one-mile option where the community came together to support each other in a common cause to end Alzheimer’s.

The walk started at Zorn arena and weaved through the campus mall. Thousands of people from around the community, including students from campus, joined each other in this walk to raise awareness and fundraise for a cure.

Many Eau Claire and Chippewa Valley Technical College (CVTC) students participated in the walk, including Dylan Menne, who volunteered this year with the walk for the first time.

Menne works at Azura Memory Care in Eau Claire, a nursing home where all the patients have

Alzheimer’s or some form of dementia. He also volunteers at Mayo Clinic in the Critical Care Unit (CCU), where he supports families who have a relative receiving open-heart surgery.

Menne volunteered with the walk because he felt connected to the patients he worked with and wanted to make a bigger difference.

“I got really close with them and got to see the disease process and how devastating it is,” Menne said. “I just wanted to be a part of something that can lead to research for a cure.”

Aiden Terry, a junior at Eau Claire, is a close friend of Dylan’s and chose to walk to support Dylan.

“I’m here to support him (Dylan), really,” Terry said. “But it’s important to raise awareness for a disease that not many people know about.”

The Walk to end Alzheimer’s is the world’s largest fundraiser for Alzheimer’s and has walks all over the country. Menne and Terry were not the only ones affected by the disease.

“This walk is special because everyone is here for a common goal,” Cooper said. “We are all here to fight the same fight.”

“I’m here to support everyone that has been impacted the disease,” Sinz said.” It’s great to see all the people here for the same cause.”

Inside Zorn Arena Saturday morning was a poster everyone who had been in some way personally affected by the disease was able to sign.

“The poster says ‘I walk because …’ Anybody can write down why they are walking and their reasons,” Menne said. “It’s great to see why this walk matters to so many people.”