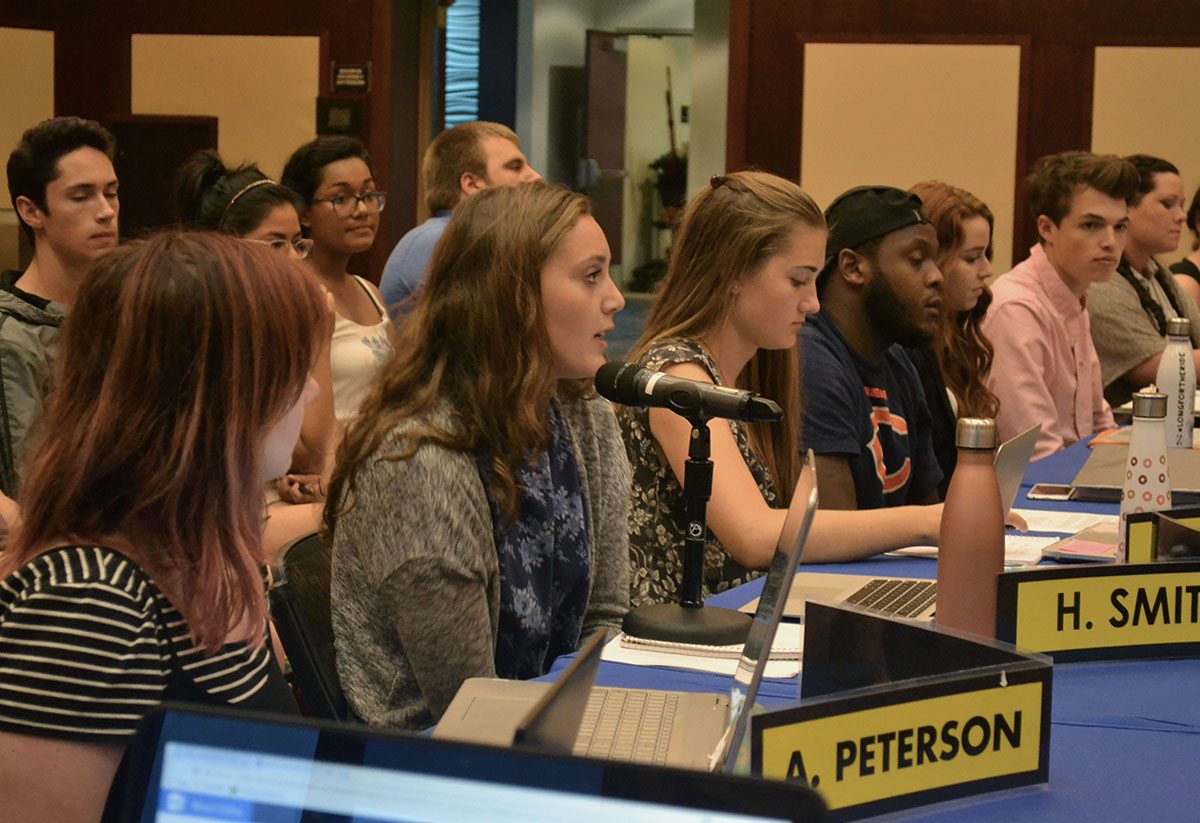 Student Senate passed a resolution in support of DACA and one in support of continued shared governance in the UW System. A bill to amend the Student Office of Sustainability (SOS) Bylaws was also passed.

The first resolution on the table was regarding support for the DACA, which was introduced by Justin Vue, the second chair of the Equity in Student Matters Commission.

Citing contributions undocumented and international students have made in the workforce — about 4,000 jobs in Wisconsin and about 401,000 jobs for the U.S. this past academic year — Vue described the resolution as showing DACA students play an important role on the Eau Claire campus and society as a whole.

The resolution does not include a clause in support of either the Dream Act or the Dreamers Act, both bills in talks among Congress to replace DACA. DACA was an executive order issued by former President Barack Obama in 2012.

Senator Alejandra Estrada expressed her support for the resolution on account of having known, worked with or befriended DACA recipients on campus. She said DACA students are at risk of further marginalization within the community since the program was rescinded.

“I cannot express how much of a positive impact these students have made on our campus, from being student athletes, club presidents and honor students,” Estrada said. “Beyond their academic achievement, they share the same hopes and dreams as us to live in a safe and stable and welcoming community.”

Vue stood in support of the resolution, calling it a “grassroots kind of movement.” He said passing the resolution would inspire similar acts in the future as well as show students that Senate supports them.

“Our resolutions aren’t about making statements — they’re about taking a stance,” Vue said.

Among those to vote down the resolution were Chief of Staff Branden Yates and Campus Affairs Director Hunter Clark.

Quoting Sen. James Lankford’s (R-OK) statement on the rescission of DACA to support his stance, Yates said he would not support the resolution because he believes DACA was created unconstitutionally.

“I will instead be supporting the Dream Act of 2017, which is in the Senate right now, which will protect Dreamers in higher education that are in the military and that are currently working,” Yates said. “I will not be supporting this resolution today because I believe this is not constitutional, but I do hope that a similar law does pass through Congress.”

Clark expressed similar sentiments and said he would not support the resolution because he believed there are “procedures and protocols we need to follow” and Senate should be focused on being a nonpartisan body.

“We’ve seen this in the past, and it’s a distraction for us,” Clark said. “It divides us. I think we just need to proceed with caution on this and have more discussion when something like this happens next.”

Mascot Coordinator Angel Ramirez spoke in support of the resolution.

“I agree that we must proceed with caution, but I also believe no matter how big or small we must make it known that we hear students asking for support and that we are available to assist in whatever ways we can,” Ramirez said.

The resolution passed in a roll call vote 20-5.

Shared governance was set in place by Wisconsin State Statute 36.09.05 and allows for students to actively participate in the decision-making process alongside institutional representatives. According to Webber, the State Legislature made modifications in 2015 to move students from a primary policy making role to an advisory role.

“This resolution is standing in support with other student governments looking to restore equal shared governance rights in formulating policy of student life, services and interests,” Webber said. “We do have true shared governance here and I think it shows the power that the students have here and the work that we do here every single day and makes this university what it is.”

The resolution passed unanimously in a voiced vote.

Dier Pulatov, the Finance Director, introduced a bill regarding a special allocation request

which would fund the Second Chair of Equity in Student Matters Commission (ESM).

The proposed bill would allocate $2,172.69 to the position, which equates the compensation received by the First Chair of the ESM, according to Pulatov.

Bill 61-B-5 – Amending the Student Office of Sustainability Bylaws

A bill proposing amendments to the Student Office of Sustainability (SOS) Bylaws passed after Senate opted to suspend the rules and vote on the bill this week instead of next week.

SOS Director Kristina Haideman introduced the bill. The bill amended the Bylaws to replace the Communications Intern with a Strategic Planning Intern and added several responsibilities to the new intern position.

“This bill is meant to bring clarity by establishing 12 board members and structuring an intern arrangement to account for a new Communications Commission,” Haideman said. “Key provisions of this bill eliminate the Communications Intern position replaced by a Strategic Planning Intern position.

The bill moved to amend the SOS Director Responsibilities as follows:

–          Consult with Facilities Management for collaborative opportunities and feasibility of projects throughout the academic year.

–          Consult with the Budget Officer on a regular basis to ensure fiscal responsibility.

Haideman said the latter of the added responsibilities is in response to “questions” in the past surrounding items the SOS Commission passed, “regardless if they were allocations or not.”

“I think there needs to be better dialogue between the Budget Officer and the SOS director, as well as the SOS faculty advisor, who works on a frequent basis with the commission,” Haideman said.

New responsibilities added to this position include:

–          Assist Director in implementation of major projects within campus and the community.

–          Create an assessment report to be completed at the end of the academic year summarizing accomplishments and plans for the following year.

–          Serve as liaison between SOS, and campus, city and county-level stakeholders in sustainability policy.

The bill also removed the Events Intern position and replaced it with the SOS Events & Marketing Intern position. This change kept most of the responsibilities in tact with the exception of number three. It has been changed to read “Supervise the execution of contractual agreements for major events and film rights.”

–          Coordinate classroom presentations at the start of each semester.

In addition, the membership section was amended to limit the number of voting members on the SOS Commission to 12. Non-voting members are allowed to serve on Task Forces.

Speaking on behalf of the bill was Senator Derek Lindquist, a member of the SOS Commission.

“Having the opportunity to create the new Communications Commission has freed up some space for, basically, another intern to come in and help us a little bit more with more of our initiatives and continuing to implement these green initiatives on our campus,” Lindquist said. “I believe that the addition of the Strategic Planning Intern is a very beneficial thing to our commission.”

The bill passed unanimously in a voice vote.