Student Senate Elections: What you need to know about the candidates 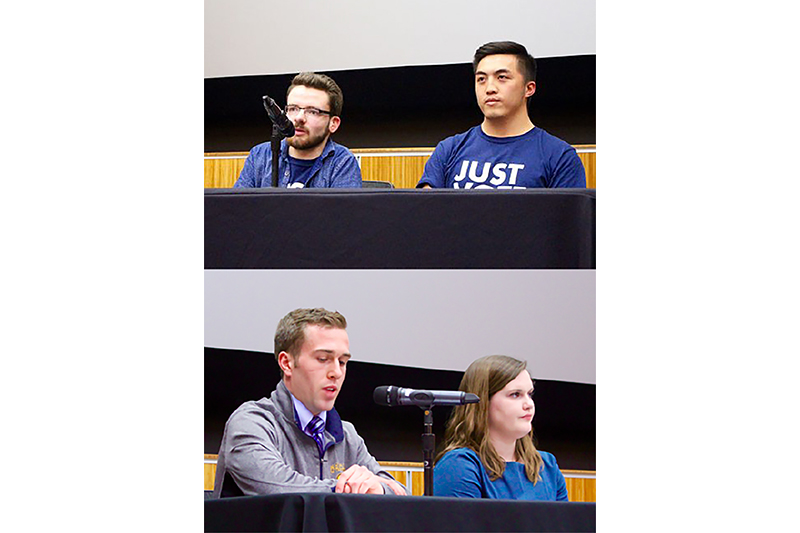 Student Senate elections are just around the corner, and students are encouraged to vote for an executive ticket and a total of 30 senators who will represent the student body and allocate up to $17 million a year in funds.

Both McGarry and Webber said they’ve been passionate about student governance since setting foot on campus. After an unsuccessful run for vice president last year, McGarry returned to Senate anyway and is the current chief of staff. Last year she served on the executive board as the intergovernmental affairs director, which requires working with legislators to advocate for student issues. This year Webber holds that position.

Issues on their platform include off-campus housing; Equity, Diversity and Inclusivity (EDI); sustainability and increased campus resources. McGarry and Webber said they are committed to making off-campus housing safer for students.

Webber has been “instrumental at the city level of getting an ordinance change,” McGarry said. She and Webber hope to have an ordinance in place to create a landlord registration process this April, she said.

In regard to EDI, McGarry and Webber noted the importance of the Strategic Plan 2020, in which a campus goal is to achieve a 20 percent enrollment of students of color and to close the opportunity gap by 2020.

They plan to make it a priority to hold the administration accountable and ensure it follows through with its promises to train faculty in diversity, McGarry and Webber said.

“It’s really important that when students go into a classroom, they know their faculty have been adequately trained and told about these issues of diversity on our campus,” McGarry said, “because if the faculty doesn’t have that training, it affects the students.”

The availability of critical campus resources is a concern of their as well, such as Counseling Services, Student Health Services and the Bias Incident Response Team (BIRT).

McGarry said Counseling Services struggles to find an appropriate amount of space to fulfill its mission and that she stands behind the committee that’s evaluating if it would be more beneficial to place Counseling Services and Student Health Services in the same location.

“If this is a priority for our campus, we need to make sure our students are getting the help that they deserve, that we should make sure that there’s adequate space,” McGarry said. “That’s something that Nick and I are really going to be pushing for: Having those conversations with the administration about how we can put Counseling Services and Student Health Services up on the forefront.”

Representation from numerous groups on campus in student governance was important to them, Webber said, and they believe their ticket represents well the campus and student population.

Hunter Clark, a junior running for off-campus student senator on McGarry and Webber’s ticket, said a fundamental difference between them and the opposition is experience.

“A lot of issues are the same, but I think it’s one side just saying they want to do these things, and it’s another side where McGarry and Webber have actually done these things,” Clark said. “They have experience. They know what needs to be done. They know the steps that they need to take.”

Their commitment to student governance during their college careers, McGarry and Webber said, exhibits how serious they will take the executive positions if voted in.

“We really want to make this university a place where everyone feels as though they are valued, and it is their home,” McGarry said, “that they’re getting a good education and that it’s somewhere that they want to be.”

Altmann and Vue are relatively new to the Senate scene, and both started representing students this academic year, but each have critical experiences in student leadership around campus.

Almann currently serves as the academic affairs director where he represents students’ academic interests to faculty and staff. He has also worked with the Ability in Motion program (AIM) in Student Support Services, which is a program that serves students with disabilities, first-generation students and students that originate from low-income families.

During his sophomore year, Altmann was elected vice president for the Student Support Services Advisory Board, an experience he said helps qualify him for student body president.

Vue campaigned for an on-campus senator position last spring on the current student body president’s ticket and was elected. Aside from representing on Senate he is also a resident assistant in Governors Hall on the Hmong Living Community floor. Last summer he was an intern for the Multicultural Affairs Office and took part in the Blugold Beginnings program before coming to UW-Eau Claire.

“It’s the lived experiences that make you the best person to help make these decisions and implement these institutional changes that need to happen right off the bat,” Vue said.

Expressing his concerns about the oppression of students of color, Vue said it’s important to achieve equity on campus for those who are already here and for future students.

“Equity over equality,” Vue said. “Being able to achieve equity, then that’s when everything else will begin to fall into place. It’s just serving basic human rights.”

Another important aspect to their equity platform is disability resources. Altmann said he is hoping to make the campus conveyance van wheelchair accessible since it’s supposed to support people with disabilities.

Issues regarding on-campus and off-campus housing are also high on Altmann and Vue’s agenda.

Vue said inclusivity in the dorms, renovations, sustainability and increased maintenance are the four main goals for on-campus housing.

As for off-campus housing, Altmann said he has spoken with state legislators on holding landlords accountable for the repairs and renovations that houses need, as well as regular inspections.

They also look forward to improving student services, including Counseling Services, the LGBTQIA+ Resource Center, the Multicultural Affairs Office, Veterans Services, Services for Disabilities and the Office of Academic Excellence.

Vue noted that the resources are available, but he expressed concern that not everyone knows about them or how to access them.

Paige Panzenhagen, a freshman running for on-campus senator on Altmann and Vue’s ticket, supports the running mates because of their leadership experience and charisma.

“They definitely do have a lot of experience with the Senate and with lobbying and doing different stuff in the communities and even on a statewide level,” Panzenhagen said. “I also think that they are very personable. You definitely see them out on campus getting to know people.”

Altmann and Vue believe their experience in representing and fighting for different groups in the community makes them most fit to serve as the president and vice president of the student body.

“When you look at our record and what we have pushed for in Senate, we are the only ones who can say ‘These are the values we stand for,’ because this isn’t a platform that we sprung up because we wanted to run,” Altmann said. “This is a platform that we’ve lived.”
Senate elections will be held from April 10-12. Students will receive an email on that Monday and have until Wednesday to vote for president and vice president, as well as 26 student senators.