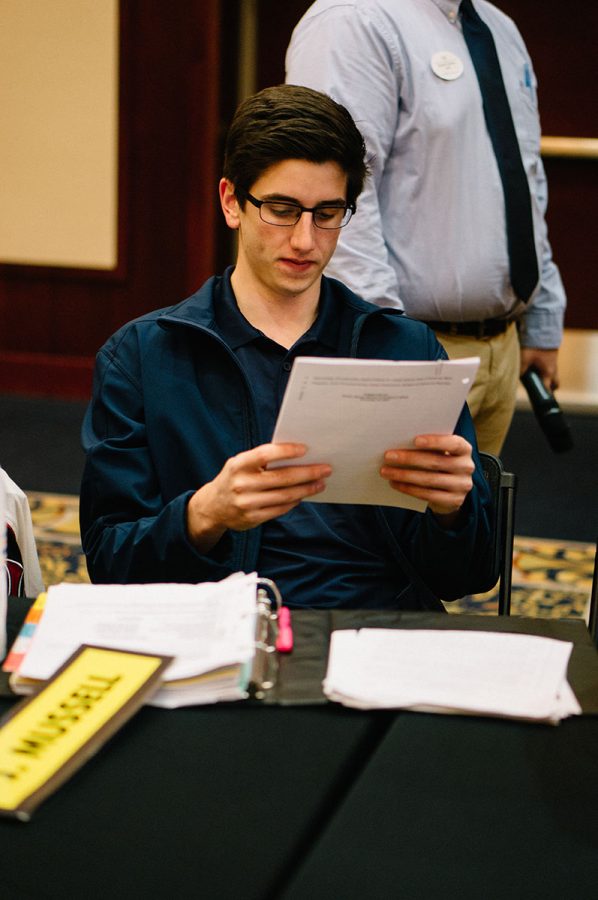 Student Senate had a lengthy debate about a comprehensive tobacco-free campus policy during Monday’s meeting.

With only one more Student Senate meeting to be held in the current session, many senators and directors took the opportunity to speak during Monday’s meeting held at the Woodland Theater in Davies Center.

The meeting presented two bills and two resolutions. The first bill, which was voted on during the meeting, approved the Blugold Commitment Differential Tuition Funding Proposal for the upcoming 2017-18 school year.

The plan provides funding for continuing programming, which gives support to many different areas on campus including the Watershed Institute, funding for the civil rights pilgrimage and the writing center, as well as several other programs. Approximately 40 percent of the fund will be dedicated to financial aid for students, including three grants.

Provost and Vice Chancellor Patricia Kleine was in attendance to show her support of the bill.

“We made a commitment to the students that 100 percent of the student body would participate in either undergraduate research, internships or study abroad,” Kleine said. “That’s 100 percent. We’re right now at 93.”

Kleine elaborated on the situation, explaining many students do internships over the summer without receiving credit when they should be.

“Differential tuition is one of the things that sets us apart from other UW schools,” Small said. “I think when we came to Eau Claire we all had something in our mind that we wanted to do something else other than academics, whether that be Senate or a student organization.”

The next item of business Senate discussed were the bylaws which govern Senate. The Internal Affairs Commission headed the bill which proposed certain changes to the 90-page document, including communication and specific commission revisions.

Student Office of Sustainability Director Ethan Fuhrman proposed offering a public hearing on Thursday to help the student body and student government have transparency within the leadership. The hearing will take place at 6 p.m. Thursday, April 13 in the Student Senate office in Davies Center.

Overall, the item on the agenda that was the most heavily discussed was a resolution in support of a student-crafted comprehensive tobacco-free campus policy.

Approximately 2-3 percent of UW-Eau Claire students smoke or use a tobacco product, according to a survey taken last year.

The resolution aimed to adopt a campus-wide tobacco-free policy which would be socially enforced, with signage on university properties and cards given out encouraging people to quit. No official punishments would be enacted.

An exception to the rule allows cultural ceremonies and events held on campus grounds to use tobacco.

Tobacco was defined in the resolution to include any lighted cigarette, cigar, pipe or hookah products, any other smoking product and any smokeless, spit or spitless, dissolvable or inhaled tobacco products.

Other UW System campuses have implemented the same policy including UW-River Falls, UW-Stout and UW-Stevens Point.

Many senators questioned the rhetoric used in the resolution, asking why the committee decided to adopt a tobacco-free policy over a smoke-free policy, to which they answered it would be more universal.

The resolution, if passed by the University Senate and Chancellor James C. Schmidt, would recognize it as a student-led effort similar to other resolutions formerly passed by Senate. Examples could include offensive language or biased speech, as cited by President Ashley Sukhu during the discussion.

Senator Brian Bauer voiced his concern about students who were smoking or using tobacco in personal cars on campus parking lots. He said they might feel as though their feelings were infringed upon.

Senator Aubrie Peterson struck a similar cord as Bauer, saying when people are told what not to do, especially by government, they are more likely to do it, and the resolution might be useless.

Peterson said she thinks there should be a better way to educate the campus population about methods to quit because Student Health Services is equipped to help with tobacco and smoking cessation.

Senator and Resident Assistant Branden Yates addressed international students and said many students from his hall who smoke may not feel as comfortable with the campus due to the resolution.

The resolution passed with a vote of 15-14 in a roll call vote.

The final item of business was a resolution in support of the Campus Affairs Commission’s allocations of segregated fees to student organizations for the upcoming fiscal year.

This fund allows up to 1 percent of the total Organized Activity Budget and will be spending nearly $44 thousand in total for student organizations. The resolution passed with a vote of 28-0-0.

Vice President Colton Ashley was the previous Campus Affairs director and was able to talk with the current director, Lars Nelson, about how the process went with the Finance Commission.

“I’m very happy with the work that both commissions have done,” Ashley said. “Especially the Campus Affairs Commission for doing their duty diligently.”