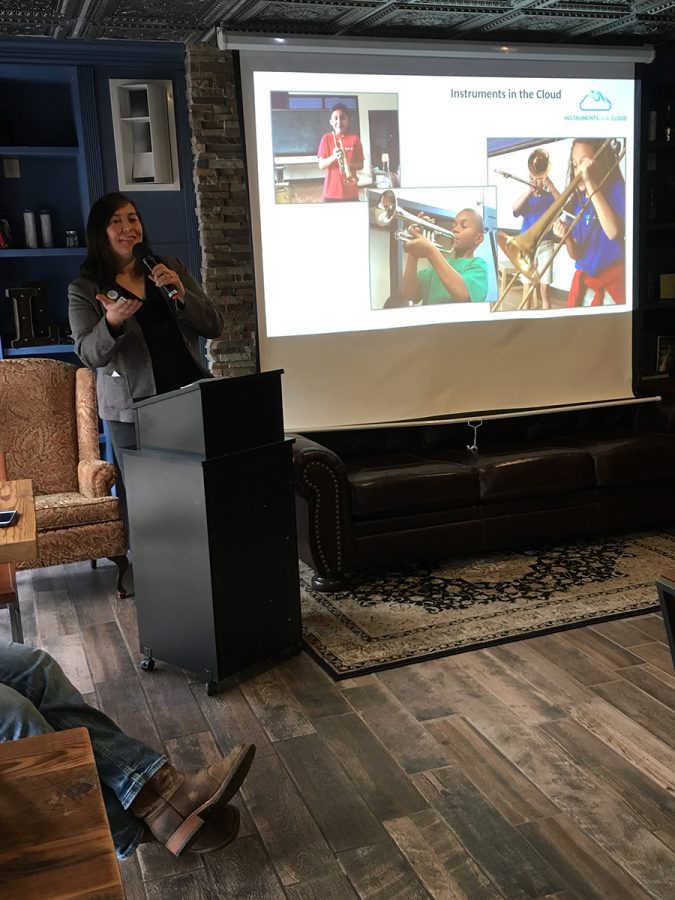 Caitlin Marlotte, executive director of the nonprofit organization Vega, presented on a mobile app meant to connect classrooms and students with the musical instruments they lack.

Local entrepreneurs and community members introduced themselves with handshakes and smiles at the Local Lounge Wednesday morning as they settled in for the first Eau Claire chapter 1 Million Cups meeting.

The organization’s goal, according to its website, is to “educate, engage and connect entrepreneurs.” The new Eau Claire chapter aimed to do so through its first set of presentations, given by Glen Liubakka and Caitlin Marlotte, respectively.

“Often the simplest solutions have the biggest impact,” Liubakka said to kick off his presentation.

For the next six minutes, he told the audience about his company, EZ Box Electrical Systems Solutions, LLC, which is owned by Glen, Marcus and Tanner Liubakka. The company offers a line of easy-to-mount electrical boxes. He said these boxes can be connected to walls without the use of tools or fasteners. The goal of these boxes, he said, is to address arc fault conditions at the root and make the process simpler and safer.

When Liubakka initially started the company, he said he was lucky to have investors among people he knew. After his presentation, however, he called for investors within the audience.

“Everything right now is ready to launch, except for the capital required to get the molds made,” Liubakka said. “Once we get through the initial launch and we start generating revenue, it is our intention as the three primary owners, out of our share of what’s coming in, we’re investing 50 percent back into the company to continue with these launches and keep the company going forward.”

The second and final presenter of the day was Caitlin Marlotte, executive director of Vega, a Minnesota nonprofit organization.

Marlotte spent the duration of her presentation discussing an app called Instruments in the Cloud, which is used to connect individuals looking to donate gently used instruments with students and classrooms that need them.

When children in schools can’t afford their lunches, they’re even more unlikely to be able to join band due to the instrument rental costs. This is a problem the app is meant to address because participating in music is important, Marlotte said.

The organization’s goal was to create a sustainable revenue model for the app. Following her presentation, Marlotte looked to the audience for “ideas, resources and connections” to figure out how to get Instruments in the Cloud to benefit Wisconsin or the Eau Claire community in particular.

UW-Eau Claire Entrepreneurship and Economic Development Coordinator Anne Rupnow was one of the women spearheading the creation of a 1 Million Cups chapter in Eau Claire, alongside Diane Hoadley, former dean of the university’s College of Business.

Rupnow said she knew from the beginning this needed to be community-based rather than campus-based in order to be successful. She said attendees needed to be able to make the kinds of connections the wider community provides. Connections, after all, are one of the goals of the organization as a whole.

Planning began this past fall, Rupnow said, after seeing the organization elsewhere in the Midwest.

“I visited the 1 Million Cups in Fargo (North Dakota),” Rupnow said. “They have one of the most well-attended ones in the U.S., and I came back and thought, ‘If Fargo can do it, Eau Claire can, too.’”

Katy Stevens, owner of N7 Cafe in Banbury Place and 1 Million Cups attendee, said she initially came to the event to meet new people and network. As a local business owner who is relatively new to the scene, she said the event allows the opportunity for her, and others like her, to connect with more experienced business owners and get their input and advice.

“They (the presenters) are asking people for funding and it’ll just be awesome to see what becomes of that, and after presenting here, what they will gain from their presentation,” Stevens said. “And just the innovativeness of it. I really appreciate when someone has an idea and they actually go for it.”

1 Million Cups will meet 9-10 a.m. every Wednesday at the Local Lounge in Eau Claire, and the public is welcome to attend.