Students and campus employees come together to fight social injustice 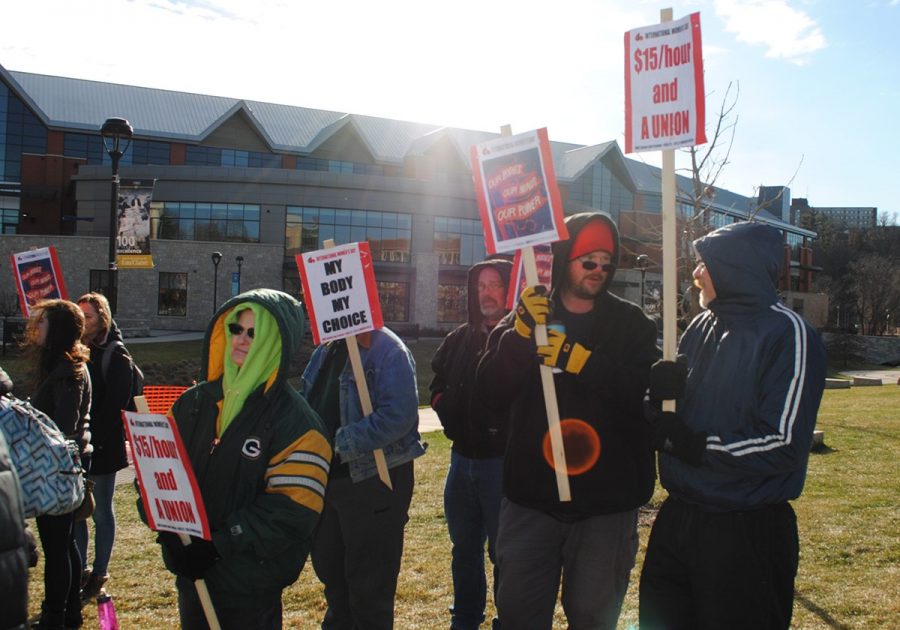 Supporters held signs that read “love trumps hate” and “our bodies, our minds, our power” in the campus mall Wednesday.

On the morning of Wednesday, March 8, Women around the world laced up their shoes and headed off to work — defeating the patriarchy.

UW-Eau Claire students and employees were among those joining in solidarity as they united on the campus mall as part of the International Women’s Day Rally.

Speakers took to the megaphone on campus mall, as a crowd of about 20 formed around them. Through freezing cold winds, which were over 26 miles per hour, supporters held signs reading statements like “Love trumps hate” and “Our bodies, our minds, our power.”

The rally was organized by Eau Claire’s Student Labor Coalition, which advocates fighting to foster labor solidarity across campus, as well as against racism, sexism, corporate greed and other forms of oppression at Eau Claire.

Robin Rosentreter, president of the Local 517 foodservice union on campus, was the first to speak. She touched on the historical women who came before her as well as the coalition’s mission on campus and the importance of being a trailblazer.

“A lot of members here on campus are women,” Rosentreter said. “They fight a constant battle of being a woman and being a full-time worker. We unite everyday for equal rights and equal pay, just as women did in 1908.”

Rosentreter said she was drawn to form the coalition so there would be a group on campus where everyone could help each other out and so no one would be fighting alone. Her goal is to get a variety of campus organizations united in the fight.

Sharing similar sentiments was Union Representative for Workers United Alex Gillis, who rallied the crowd on the importance of uniting as a community and campus.

Gillis said the coalition, which started just 10 days ago, is their way to reach out to students, faculty, staff and other unions on campus in order to expand the solidarity needed to fight any injustice.

The organization wants to be relevant and identified as a part of the community, he said, but noted this won’t work unless it is able to understand what other communities are asking and what the problems are on campus.

Undeclared freshman, Alison Mundth, was among the students who braved the cold to attend the rally.

As a part of an honors course, Mundth and a few other students were assigned to pick a social movement and get involved. Her group chose the women’s movement.

“(The women’s movement) is something that really inspired all of us and events like this are so empowering,” Mundth said. “I think it’s really important to remember as far as we’ve come … there’s still so much progress to be made, so we are just trying to get involved with as many small and large scale things as possible.”