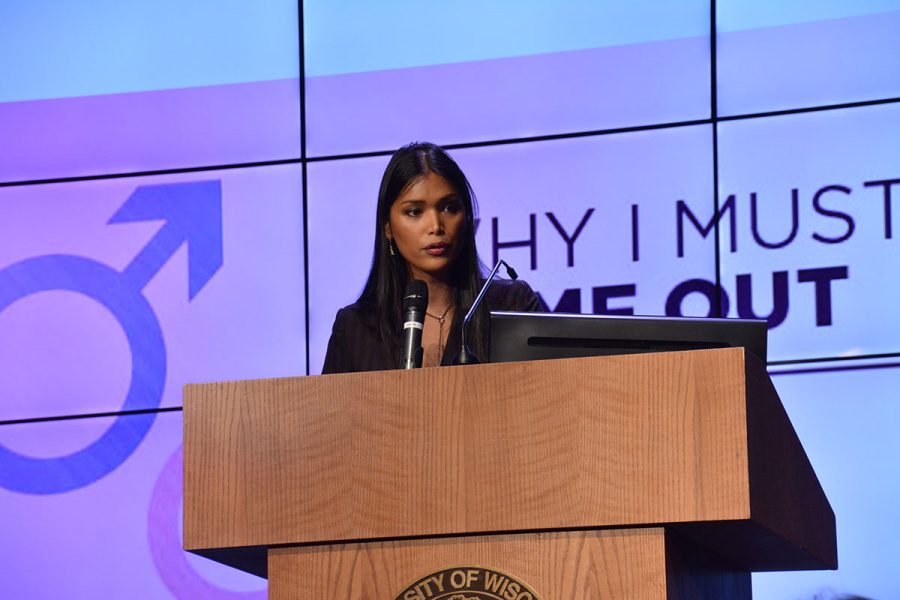 Geena Rocero discusses her road to coming out and the importance of affirming transgender youth Thursday evening in Schofield Auditorium.

A transgender supermodel emphasized the importance of protecting and affirming transgender youth across the world in her speech “Why I Must Come Out,” on Thursday night in Schofield Auditorium at UW-Eau Claire.

“At a young age, trans youth know who they are,” said Geena Rocero, a transgender supermodel and transgender rights activist. “We need to protect them.”

About 175 students and citizens from the Eau Claire area gathered in the auditorium to listen to the story of Rocero’s coming out and her advocacy efforts to continue the conversation on transgender rights as part of Eau Claire’s 75th annual Forum series.

Having grown up in the Philippines, Rocero spoke of the contrasting political climates between her home country and the U.S. for transgender people, while also discussing the importance of acknowledging and protecting transgender youth across the globe and the emotional struggles of hiding her identity over a decade.

Rocero began by touching on the history of the Philippines and the prominence of transgender beauty pageants in the country.

As a young girl, she said she watched the transgender women on stage, hoping one day she could be like them. These women, however, were ridiculed and accused of not truly being women.

In the Philippines, Rocero said transgender people are “culturally visible, but not politically recognized,” something she said was the opposite in the U.S.

“Society would tell me I am a boy. ‘Be a boy. God made you a boy, be a boy,’” Rocero said. “Later in my life that would take a toll on me, as a young person being told that I am not the person that I am.”

When she was 15 years old, Rocero began competing in transgender beauty pageants, where she joined a community she calls her “trans family.” Here, Rocero said she felt happy and supported.

Rocero moved to San Francisco in 2001 when she was 17 years old, after her mother told her in the U.S. she would be able to legally change her name and gender marker on legal documents. In 2005, she ventured to New York City to pursue her dreams of becoming a model, but because being a transgender model at the time was “taboo,” she hid her identity from the world.

“I felt that I couldn’t really be myself,” Rocero said. “I was in the fashion industry, an industry that is all about the power of imagery, but I wasn’t fully being seen as I am.”

That contradiction, Rocero said, was damaging to her mental health.

When she was about 30 years old, Rocero made the decision to come out in a TED Talks speech in 2014.

“I was just ready to risk it all,” Rocero said of coming out.

The introductory speaker, Kezia Jenkins, a senior women’s studies student and member of the queer community, had high remarks for Rocero’s speech.

“I thought that Geena brought up some really great and wonderful points throughout the speech, especially relating to trans youth and the history of colonialism,” Jenkins said.

Annie Titus, a sophomore English student and transgender woman, said speeches such as Rocero’s provide a supportive environment in which people struggling with their identity can ask questions without the stress they might otherwise have.

“I think it offers an area where people have the freedom to step forward and identify out loud their questions about their identity, whether it’s a gender binary or whether it’s a sexual identity,” Titus said.

Rocero said she remains committed to continuing the conversation in protecting transgender youth and advocating for transgender rights on a global level.

“I am a woman at this point in my life, living with a sense of compassion in a world that’s been led to believe that gender is just this very rigid binary, but it’s not,” Rocero said. “We need to free ourselves from this understanding that you have just this boy and a girl … and when we do, we get to reflect on each other our common humanity, our common struggles.”