Women have become the backbone of Roy’s Barbershop 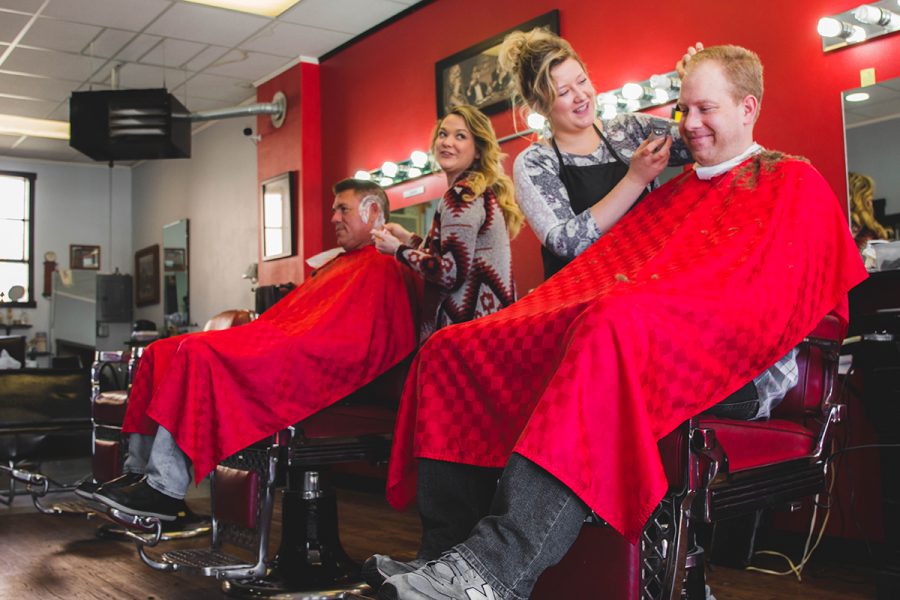 When people think of an old-fashioned barbershop, the image that typically comes to mind is one of straight-edged razors; boisterous and hearty men and a red, white and blue barber pole that spins endlessly.

Although the straight-edged razors remain, nowadays, people can walk by Roy’s Barbershop on Water Street in the middle of the day and see three women standing behind the chairs.

Roy’s has been around since 1947. The current owner, Cory Cooper, said he bought the business in April 2008, and since then, has expanded his staff to include more women.

Cooper said hiring more females onto his staff was a financial move because men these days seem to prefer having their hair cut by women rather than men.

“I was curious as to how all these other places in town could stay in business because they don’t do the best job,” Cooper said, “but these guys are going there for the females. So one day my accountant said, ‘Hey, get out of that first chair and put one of the girls in there, in the front window,’ and it was like, the very next day business increased.”

According to Barber Schools, around half of today’s barber workforce is females, a trend which has remained steady since approximately 1980.

While Cooper said he isn’t typically around the shop when all his female employees are working, he suspects there is less one-on-one interaction between them and their customers because they’re more focused on making sure everyone is included in the conversation and banter so no one is alienated.

Since adding more women to the staff, Cooper said around half of the barbershop’s business now comes from college males.

Jessica Bertoni, a woman who has been working at Roy’s for the past 8.5 years, said she thinks the appeal for college-aged men is that they can come in to get their haircut and be loud, joke around and “act like a 20-year-old.”

Bertoni said she personally likes working at this shop because she feels as though she doesn’t have to act “fake;” it’s more about enjoying oneself than anything else.

“You can be yourself and have fun and be crazy when you want to — dance and sing and pick on each other,” she said.

She said usually she doesn’t like working with other women, but she enjoys working with her counterparts at Roy’s because they all “click,” and get along and have a good time together.

Having a primarily female staff, Bertoni said, is something the male customers seem to enjoy because they’re “female, but fun.”

UW-Eau Claire sophomore Michael Haugen said he’s been to Roy’s three or four times now and every time he’s been in, all the workers have been women.

Despite their sex, Haugen said the environment of the barbershop they provide is raunchy because the women don’t sugarcoat anything and can get pretty vulgar with their language. He said while he feels this behavior sometimes gets redundant, it can also help the workers relate to their customers really well, especially the older men.

The female barbers, Haugen said, draw in more male clientele because they provide a different experience than customers would receive getting a haircut from another man.

“I think it’s the stereotype that women are more gentle and more soft, and they care more about hair, so just the fact that it’s a woman stylist makes you feel more comfortable getting your hair cut,” Haugen said.

Haugen said what keeps him coming back — other than the good job the employees do cutting his hair — is the uniqueness of the shop; it’s old-school, cash only and they offer a straight-edge shave.

Cooper says for the future, he hopes to keep Roy’s essentially the same, bring people a true barbershop experience.

“We’re trying to stay as old-school as what we can,” Cooper said. “There’s not too many (barbershops) left in town.”