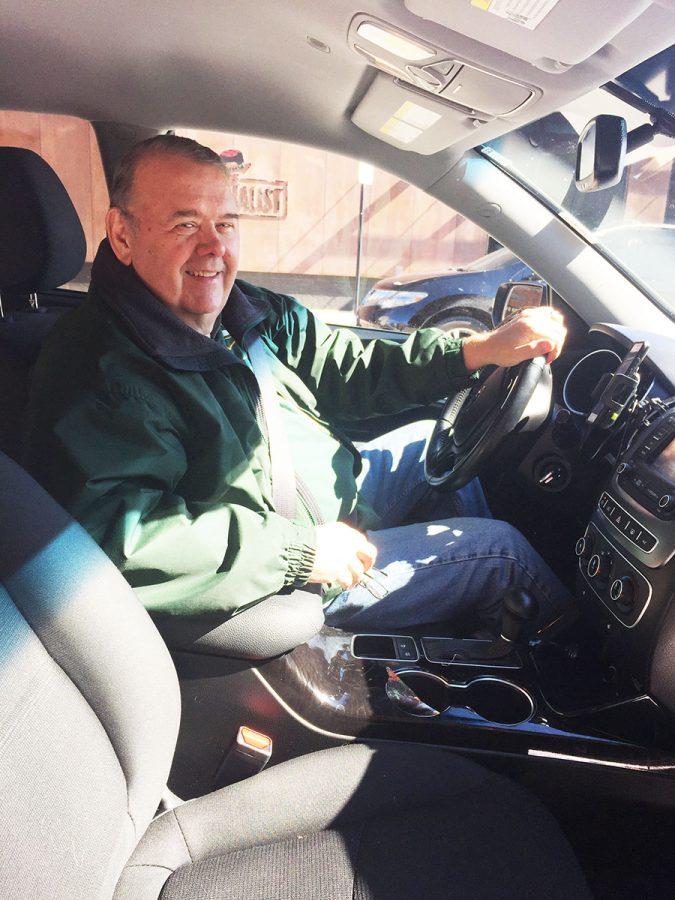 Robert Vogler, a 71-year-old retired Eau Claire resident joined Uber as a driver to fill his free time and give him something to do.

The ride-booking services Uber and Lyft have expanded their locations recently. Lyft launched in the Eau Claire area on Feb. 23, while Uber followed suit soon after.

Robert Vogler, a 71-year-old retired Eau Claire resident decided to sign himself up to become an Uber driver immediately after he heard the ride-booking company had made its way to the area.

Although he has only been a driver for about four days, he said he enjoys having something to do now that he doesn’t work.

“I have been retired for eight years now, and it can get pretty boring. I usually just do old people stuff and take naps,” Vogler said. “I also like to get together with a bunch of guys in the morning and have coffee and discuss what kids are up to these days.”

Vogler said he believes Uber made its way to Eau Claire due to high demand, especially with the city being a college town.

During his four days of working for the company, he said he has mostly given rides to college kids and businessmen and women. He said typically with the college students, he picks them up somewhere in the city and brings them back to the dorms.

He makes sure to turn off the Uber app after dark because he doesn’t want to deal with “drunk college kids.”

“I don’t drive at night because I spent my career in the restaurant business, and I dealt with enough drunks in my life, so I don’t need to do it again,” Vogler said.

Pricing for Uber and Lyft differs only slightly. There is a minimum cost for both ride-booking companies, but it depends on what package is selected. If a larger vehicle is requested it will cost extra.

The ride-booking apps keep 25 percent for their costs, and the driver gets to keep 75 percent of the fare.

“I have heard more about Uber, but as I understand it, I believe I can drive for both Uber and Lyft,” Vogler said. “The app also sends me a text message with a notification saying there is a passenger needing a ride near you and then I am given the option to either accept or decline.”

Vogler said he lives very close to the Eau Claire campus so he will just turn on the Uber app when he is bored at home and will spring to action if he is needed to provide rides.

He said he is willing to drive any distance to get his passengers to where they need to go and has been very pleased working for the company so far.

“My passengers are pretty normal people. Everyone is friendly, and everyone so far seems to be polite. I don’t have any confrontations or anything,” Vogler said.

Eau Claire students are just starting to hear about ride-booking companies coming to the area.

Gianni Rossato, a sophomore marketing student, said he believed Uber coming to Eau Claire was only a rumor and was pleased to hear it had, in fact, made its debut.

“I have actually thought about becoming an Uber driver. I have my own car here so it would be easy for me to be a driver for others,” Rossato said. “But I will also probably use the Uber in case I ever need a ride when I am drunk.”

While Vogler does not drive during the late hours of the night, that doesn’t mean other drivers are not available to help students out. Still new to the area, Uber and Lyft are growing and able to help those in need of a ride.