With honesty and humor, Seccuro faced difficult topics and called the audience to action 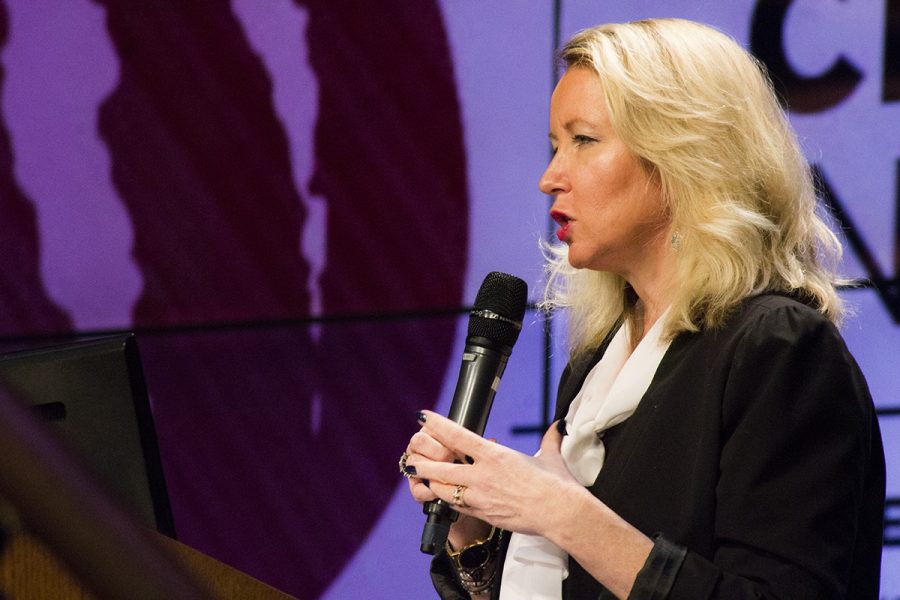 The audience broke into applause at multiple points of Seccuro’s remarks, supporting her straightforward approach to grappling with sexual and domestic violence.

Author, media commentator and journalist Liz Seccuro gave a speech on the complex topics of gender and domestic violence Thursday, Feb. 9 in Schofield Auditorium to a crowd of about 100.

Her remarks were part of UW-Eau Claire’s 75th Forum series. In addition to sharing her personal stories as a survivor of sexual assault and domestic violence, Seccuro outlined steps individuals and society could take to combat the burgeoning issue.

“It’s a topic that matters to all of us,” Seccuro said, “and it’s never been so confusing, so maddening and so promising.”

In 1984, as a 17-year-old college freshman at the University of Virginia, Seccuro was drugged and gang raped in a fraternity house. Her case was mishandled by the administration and university police, and no measures were taken against her attackers.

She related brutal details of her attack with honesty and frankness, pushing the audience to “get real” and be open about the reality of campus-based, gender-based violence.

No justice was brought to Seccuro’s case until 2005, when her attacker wrote her a letter seeking forgiveness for what he had done. They exchanged correspondence for some time as she tried to piece together what exactly had happened to her. She brought the evidence to the police so they could use it to do better at handling such cases in the future and found out there was no statute of limitations on felony rape cases in the state of Virginia.

After sitting through trials and testifying eight feet away from her attacker, being thrust into the spotlight of doubt and victim-blaming, Seccuro’s attacker got sentenced to 10 years in prison, but through a clerical error, he served less than six months.

“Is that justice? I say yes, it is.” Securro said, pointing out how many survivors never see any justice and are silenced in much the same way as she was.

Seccuro said her dad, who passed away in December and was one of her biggest advocates, told her she had to speak out and stand up against the violence.

“He said to me, ‘Teach the people. They’ll listen. Tell them what we know. Explain it. Explain it to them. Even when you can’t find the words and you have to crawl off the stage,’” Seccuro said, voice filled with emotion.

Jacie Jones is a first-year student studying psychology and women’s studies. She said she found Seccuro’s remarks powerful, impactful and important to be discussed.

“There’s this culture of silence when it comes to sexual assault and rape and all of that,” Jones said, “We don’t want to talk about it but it’s so important to talk about.”

The latter half of Seccuro’s speech was focused on providing a “toolbox” of resources and options for survivors and bystanders. She identified RAINN, a national sexual assault hotline, as one of the best resources available due to being able to call the hotline or send in typed reports if it is too difficult to articulate what happened.

Dean of Students Joseph Abhold said he thinks it is important to have speakers like Seccuro come in to talk to students about their experiences and how they were impacted. He also pointed out the unique nature of Seccuro’s speech.

“For her, it was her bravery in her being a survivor and finding her voice and telling her story,” Abhold said, “I think is a really important thing.”

Abhold said the university is implementing even more measures to ensure the safety and support of students. These include making online training about bystander intervention a mandatory step for incoming students. Furthermore, all university employees will be trained in identifying and responding to interpersonal violence issues.

Other resources made available by the Eau Claire school and university include the Center for Awareness of Sexual Assault, UWEC counseling services, UWEC police and the Eau Claire Family Support Center.