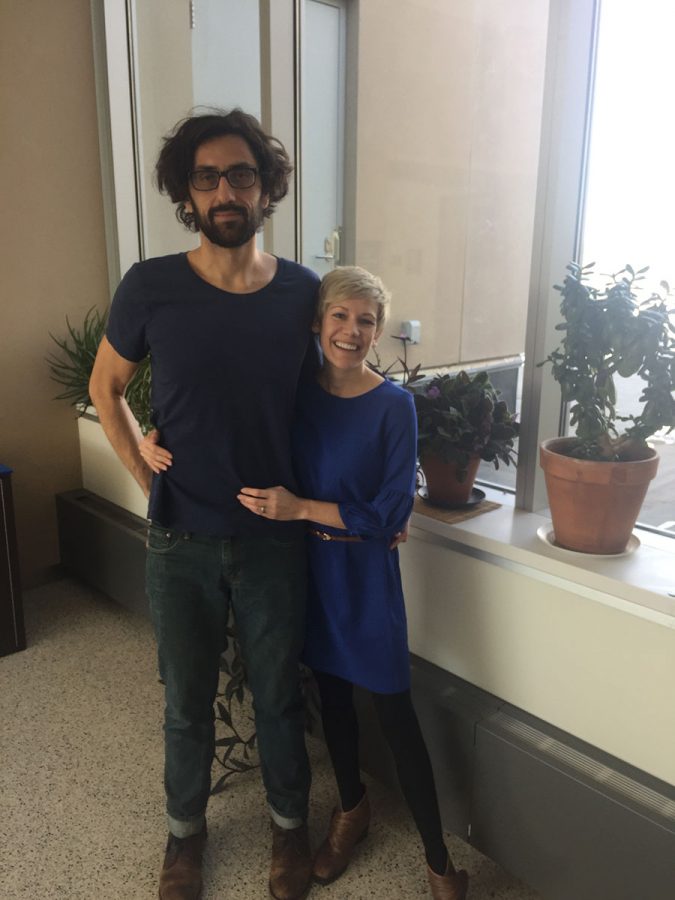 Jose Alvergue and Stephanie Farrar have been married for eight years and enjoy working a few doors down from each other every day.

In some situations, dating or being married to someone you work with can be a bit overwhelming or can cause issues in the relationship.

However, this doesn’t seem to be the case for these two specific married professor-couples at UW-Eau Claire. In honor of Valentine’s Day, The Spectator asked them to reflect on their romantic journeys.

Stephanie Farrar and Jose Alvergue, both professors of English at UW-Eau Claire, have been teaching here for four years and married for almost eight years.

“We got married in a courthouse on a Thursday morning before work,” Farrar said. “Then later we had a ceremony for our families who have not yet met (at the time).”

The couple first met at graduate school in Buffalo, New York on the first day of their PhD program. They met at orientation and both agreed it was love at first sight.

“I was the last person to show up at orientation. I was late because I got lost trying to find the building,” Farrar said. “There was a conference table with pastries and coffee when I walked in, and I just saw Jose from the other end of the conference table, and I knew that he was the one.”

The two dated for three years before mutually deciding on a drive home from New York they should get married. A week later, they were married.

Alvergue and Farrar take full advantage of the fact that they are both able to work at the same university.

“Because we have a child, we often have to have our schedules such that at least one of us is free in case there is a daycare situation,” Alvergue said. “But we see each other at lunch time quite a bit and we really do see each other a lot, definitely more than other couples who don’t share the same profession.”

The couple lives down the block from Centennial and usually just walk home for lunch together, or on nice days they walk across the bridge to the Nucleus when it is open.

“Our philosophy is to treat each other well all the time, rather than have one grand overture and then the rest of the time be a disaster,” Farrar said.

Alvergue and Farrar are not the only married professors in the English department on campus. Allyson and Jon Loomis have been married for 14 years and love working together.

They met at an academic conference in New Orleans, where Allyson saw Jon in the room looking very uncomfortable due to the fact that his ex-girlfriend was in the room with her new boyfriend.

Allyson said she wanted to talk to him to try to make him feel better.

“She hit on me and pretty much backed me into a corner,” Jon said.

They had made plans to meet up for drinks at 10 p.m. that night. During the day however, by coincidence, they both had their fortunes read by the exact same fortune teller.

The fortune teller told Allyson she had already met the man she was going to marry, but she would have to talk to him before midnight.

Not even thinking about her meeting with Jon at 10 p.m. that night, she went back to her hotel room and called all of her ex-boyfriends.

“It became this terrible thing because then I would have to leave really awkward messages and then deal with that for the next two weeks,” Allyson said.

They ended up starting a series of romantic emails once they returned home from the academic conference.

After a few months of emails, Jon decided to drive halfway across the country from Massachusetts, where he lived at the time, to take Allyson out on their first date. The two went to a movie, where Allyson fell asleep and drooled on his shoulder.

On the way home, Jon suggested they should get married.

“I looked around at my life with my futon and my cat, and I looked at him and he seemed pretty awesome, and I was like ‘Well, okay!’ So it is true that he proposed after one date,” Allyson said.

Allyson and Jon said they enjoy each other’s company at work and try to visit each other in their offices when they have time throughout the day.

“Yeah, I like to come over to her office and steal her sugar cubes and give her company in order to keep her sane throughout the day,” Jon said.

They try to get lunch together as often as possible, and if the timing works out they try to sneak away for a quick bite at Eggroll Plus.

Allyson always keeps a Post-it note on her computer that Jon wrote to her that says “things are good,” which is a reminder for Allyson for when she gets stressed out.

They said how they typically don’t get sick of each other and that their love is still as strong as the day they were married.