A day rarely goes by that Judi isn’t at The Cabin, greeting students and making coffee 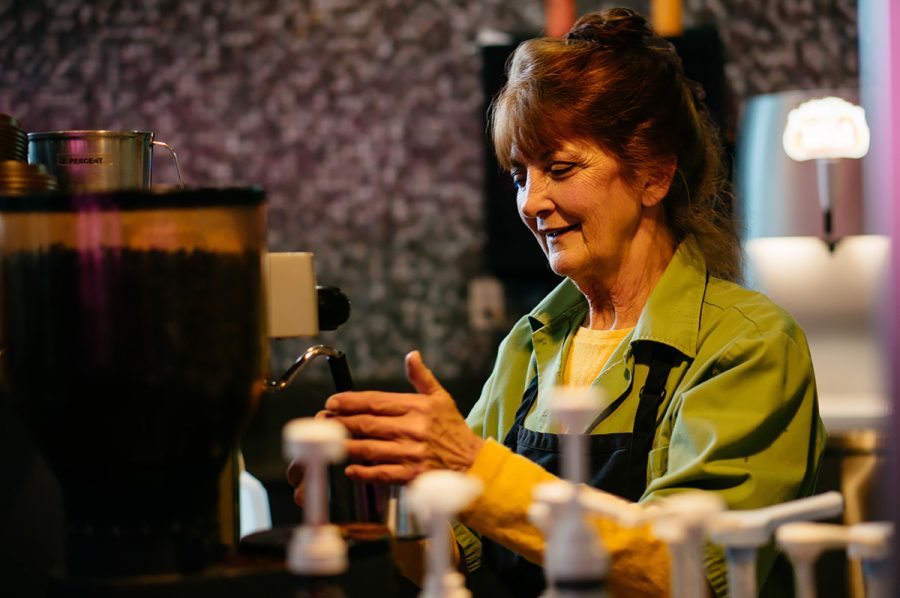 Never a bad day: Judi has been working on campus for twelve years. She said her favorite part of being a barista is interacting with students.

As temperatures begin to rise, the need for a toasty beverage (hand warmer) diminishes, but that doesn’t mean students stop frequenting The Cabin.

While the on-campus coffee shop is a well known spot for UW-Eau Claire students to grab a drink, catch up with a pal or study, there is another reason some students choose The Cabin.

“Judi is the nicest person in the world,” sophomore marketing student Shannon Mccoy said. “The Cabin is much more enjoyable because of her presence.”

Judi, one of the baristas at The Cabin, has been working on campus at Eau Claire for 12 years, and she can’t imagine a better place to work, she said.

She loves learning from the various professors who come in, asking them questions about their fields and getting to know them, and connecting with all kinds of Eau Claire staff, who she said are some of the most genuinely nice people she has ever interacted with.

However, her favorite part of working at The Cabin is, “hands down,” the students, she said.

“I’ve never had any kind of problem with a student on campus,” Judi said. “Isn’t that unreal?”

In her day-to-day interactions with students, she hopes to get to know them, make them laugh and take some of the pressures of school off, Judi said.

“The students — I want them to keep on being just who they are,” she said. “Each one is a diamond.”

She hopes that students make the most of being young, and that they live life, but do it safely, she said. The rumor that being hit by a car on campus will lead to free tuition is false, she said, and it worries her to see students being careless while crossing the street.

“Students are at the most beautiful time in their lives,” she said. “You have your whole life ahead of you.”

When she’s not serving drinks at The Cabin, Judi enjoys being outdoors, gardening, reading, spending time with her family and relaxing, she said.

Her motto, if she had one, would be “Be decent, be happy, and just enjoy life,” she said.

Conquering fears is one of the most important things a person can do, Judi said.

“I’m terrified of heights and I’ve gone parasailing, I’ve driven in the mountains, I’ve ridden in a hot air balloon,” she said. “What you’re most afraid of, do, because it’s always a rush to accomplish it and then you’re not afraid anymore.”

Breanna Haag is a first-year Psychology student who can be found in The Cabin at least three days a week, partially because of Judi’s positive presence, she said.

“Judi doesn’t care who you are, she just loves you,” Haag said.

Haag is just one of several students who said they appreciate the effort Judi makes to compliment and get to know them each time they come to The Cabin.

“Each person is important. We’re all in this together,” Judi said. “One hundred years from now none of us will be here, so we need to take care of each other and enjoy each other. Life is pretty wonderful, it honestly is.”