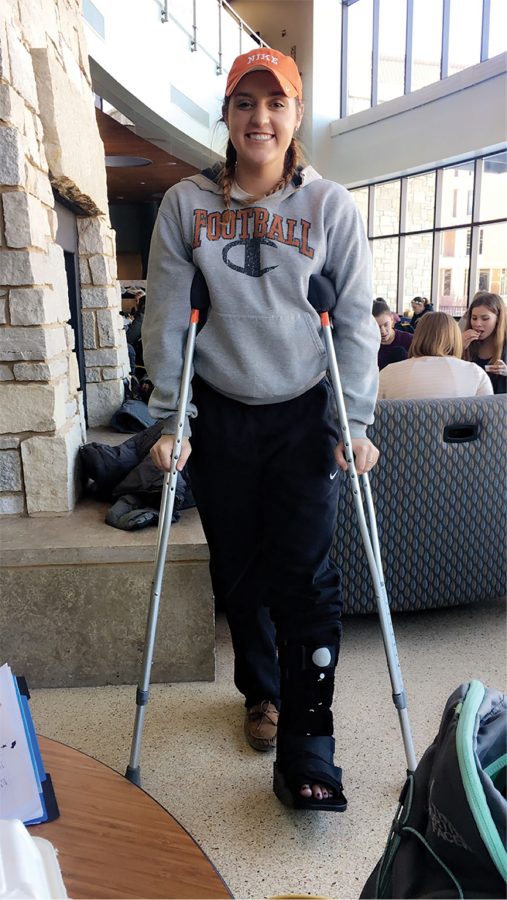 Kennedy McCullough shows off her new walking boot and crutches.

While coming back from winter break may be a drag for students; it tends to hit some harder than others. It brings them down — quite literally.

Nicole Schultz, a professor in the department of communication and journalism, was among those who returned to the 2017 spring semester with extra accessories — two knee braces.

After stepping over her pet ferret’s favorite hiding spot, Schultz went tumbling down her stairs, she said. Two failed attempts to get up led her to believe that the fall may have been more serious than she expected.

“A lot of people are like, ‘Did you get it skiing or snowboarding or sledding?’” Schultz said. “But I was like, ‘No. I’m not that cool. I was just protecting my animals.’”

The fall caused Schultz to sprain her left knee, while her right knee might have an MCL (medial collateral ligament) sprain and ACL (anterior cruciate ligament) tear, she said. Due to the injuries, she is now outfitted with two different types of knee braces. Soon, Schultz said she will receive the results of her MRI (Magnetic Resonance Imaging) which will reveal the full extent of her injuries.

Although the braces have helped Schultz get around well, she still feels some of the discomforts of working while being hurt.

“Right now I feel confident,” Schultz said. “Sometimes I’ll go to get out of the car or I’ll go to get up from sitting down and in my head, in my upper body I’m like, ‘Alright, I’m ready to bounce around and do the next thing’ and then I start to move and yup, I’m still healing.”

While out walking her dog, she slipped on the ice and fell directly onto her wrist. With several compound fractures, she brought her dog back home and drove herself to the hospital. While the fall wasn’t ideal, Fay learned a lesson about how important technology is.

“I used it like I use a lot of my personal experiences,” Fay said. “That day that I fell I didn’t have time to go get my phone and so I was in the ER trying to figure out how to let my classes know when I had no phone numbers.”

Fay found it tough to get in touch with her family and students without a phone. Despite the difficulty of this challenge, Fay decided to use it as a teaching lesson.

“What I used with my classes was this is just an example of how dependent we are on our technology and should not be,” Fay said.

Eau Claire student Kennedy McCullough is another example of a battered body.

While McCullough was out, she said she and a few friends were running to get on the bus and jumped the snowbank into the road. Everyone slipped, she said, but she fell harder than the rest and was unable to get up.

That night, McCullough broke her fibula and tore the surrounding tendons. Although the story was funny at first, she said, she came to realize how dangerous ice is.

“It makes your life suck,” McCullough said. “I could have had surgery and it would have made me drop the semester so it kind of hit me like, ‘Hey, you probably shouldn’t be sprinting on ice.’”