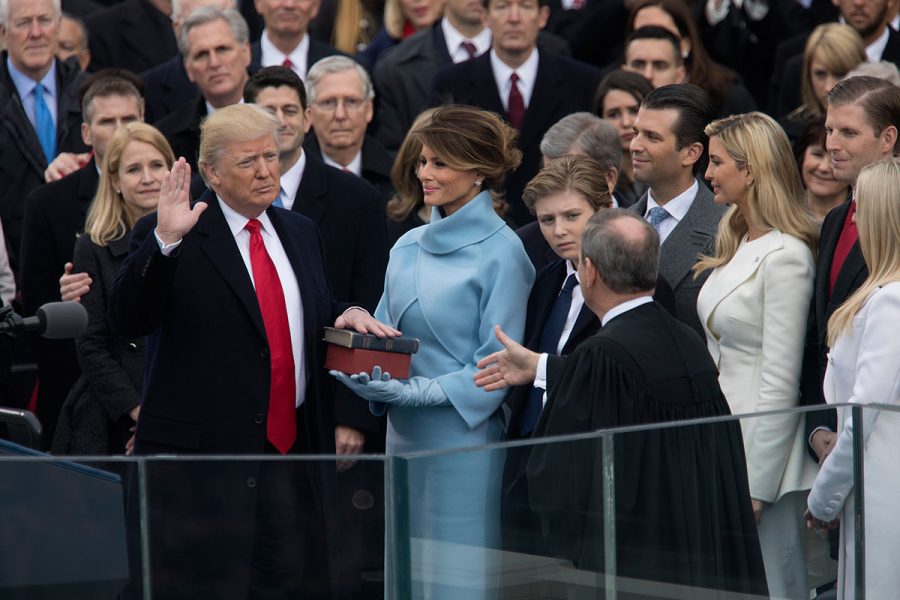 President Donald Trump was sworn into office Jan. 20 with his wife and children by his side.

Donald Trump was officially sworn in as the 45th president of the United States of America on Jan. 20, in what he said “will be remembered as the day the people became the rulers of this nation again.”

Trump’s supporters gathered on the West Lawn of the U.S. Capitol to watch his inauguration and his inaugural address in which he spoke about many of the issues he focused on during his campaign, such as jobs, immigration and terrorism.

Though segments of Trump’s speech focused on an optimistic future, other parts described a dark “past” in which he described “rusted-out factories scattered like tombstones across the landscape,” and families unable to escape poverty.

When addressing politics in Washington, Trump remained firm as he criticized politicians for garnering the compensations of government at the expense of the people.

Despite his praise for U.S. political figures such as former presidents Jimmy Carter, Bill Clinton, George Bush and Barack Obama early on in his address, Trump was quick to focus on how the establishment has treated American citizens in past years.

For sophomore business management student Megan Israel, his inauguration speech was no different from what he displayed on the campaign trail.

“I think his speech was a lot like how he’s been the whole time which, surprised me in itself because I thought once he became president he would calm down,” Israel said. “It seemed very nationalistic, almost like fascist. It kind of scared me.”

Before the election, Israel identified with the Republican party, helping out on the campaign trail for John Kasich and Jeb Bush, but said she no longer identifies with the party after Trump was elected “because of how he is trying to represent the party,” Israel said. “It’s not what Republicans stand for at all.”

A few critics of Trump’s speech have conveyed worry over whether Trump seemed committed to uniting American citizens.

Senior political science student Richard Dean said he didn’t think unity was a goal of Trump’s, but rather prosperity.

“I think he thinks that we’re sort of this huge engine and we’re just firing on a portion of the cylinders and then I think that once he gets the engine running, some of the other problems go away,” Dean said.

College Democrat Chairman and sophomore political science and organizational communication student Jake Mcguire stated that Trump’s focus on jobs surprised him “because he himself as a businessman has been well-known for outsourcing his own jobs and using and abusing the middle class his whole career.”

College Republican Chairman and junior history student Mitchel Orlovsky said that he believed Trump’s speech had a dark edge to it, but that it was justified.