Eau Claire rallies to save ‘the shack’ 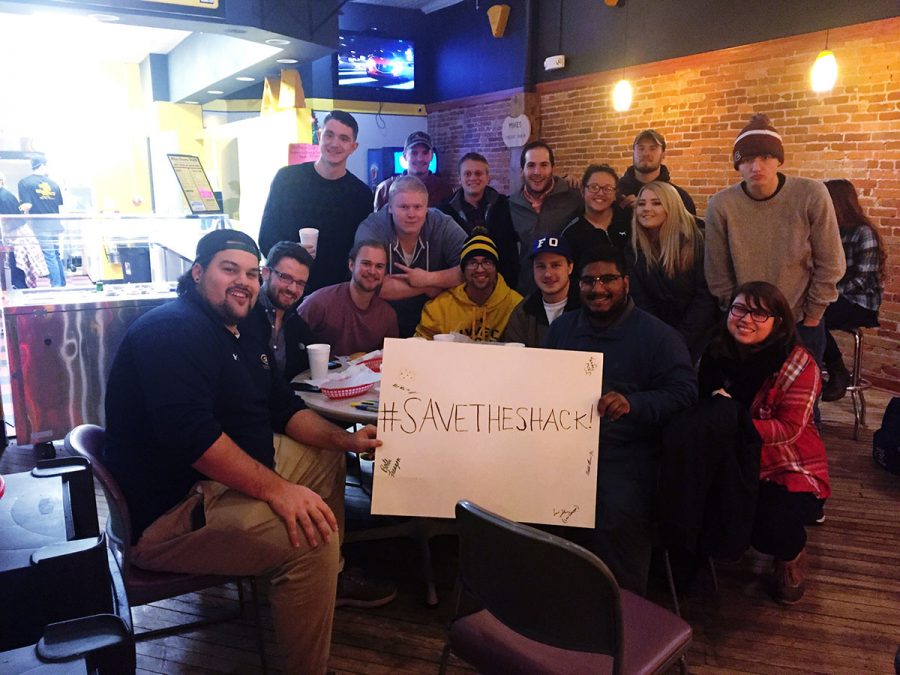 UW-Eau Claire students joined forces Friday night in an effort to save local restaurant Mike’s Cheese Shack from going out of business.

It started with a Facebook post; Mike’s Cheese Shack was making its “last attempt” to stay in business. Bug Eyed Betty’s, another local business, urged its Facebook followers to buy food at Mike’s, offering a discount with a receipt from Mike’s Cheese Shack.

The location of “the Shack,” on Water Street, has been plagued with the closing of small businesses recently. The Doghouse and Cheds both went out of business at the site in the past few years, Mike Whiteside, the owner of Mike’s Cheese Shack, said.

Lars Nelson, a fifth-year student studying business, organized the “Save the Shack” event. Nelson said he created a Facebook group and the hashtag #savetheshack with Curtis Guhl, a junior studying history, after hearing about the Facebook post created by Mike’s Cheese Shack.

“Local businesses like this are the things we need to support in Eau Claire,” Nelson said. “We’ve got a lot of fast food restaurants that get a lot of business, but it really comes down to supporting local.”

Guhl said many college students have a “staple place,” somewhere they always visit. His “staple place” this summer was Mike’s Cheese Shack.

“I think a lot of college students don’t realize that businesses like this are actually the family’s livelihood,” Guhl said.

Eau Claire student, Jake Mcculloch, among those who turned out for the event, said his father owned a few small businesses throughout his childhood and he knows what it’s like to be on the other side of a business trying to stay afloat.

“It’s a lot more important to support the small businesses than the big chains,” Mcculloch said. “A big chain isn’t gonna take a big hit like a small business like this is.”

Mike Whiteside, the owner of Mike’s Cheese Shack, said the outpouring of support from the Eau Claire community after his Facebook post has been a “phenomenon.”

“It’s been tough. The kids are the whole reason that we’re even still open right now,” Whiteside said. “Without the school and the students we would have no Mike’s Cheese Shack.”

Whiteside said he began selling cheese curds out of a small concession trailer in Indiana, where people didn’t know what cheese curds were. Sixteen years later, he opened Mike’s Cheese Shack, where the motto is “We guarantee satisfaction.”

Mike’s Cheese Shack is offering a lunch special in an effort to gain more of a lunch crowd, Whiteside said – $3 off a lunch basket until 6 p.m. for students who show a student ID.

“We’re hoping to generate a little bit of a consistency for our lunch and dinner crowd,” Whiteside said. “We have the greatest bar crowd on the planet; on Thursday, Friday, Saturday we’re lined up here at bar close. We’re just trying to get a little more than the bar crowd.”

Mike’s Cheese Shack offers free samples to any new customers. If people want to ‘save the shack,’ they should spread the word about the business and bring a friend in for lunch, Whiteside said.

“I’ve never seen such a small crowd grow as big as it’s starting to grow, with word of mouth, and with people who actually care about others in this world,” Whiteside said.  “I’ve got tears in my eyes right now. It’s been great that people care.”