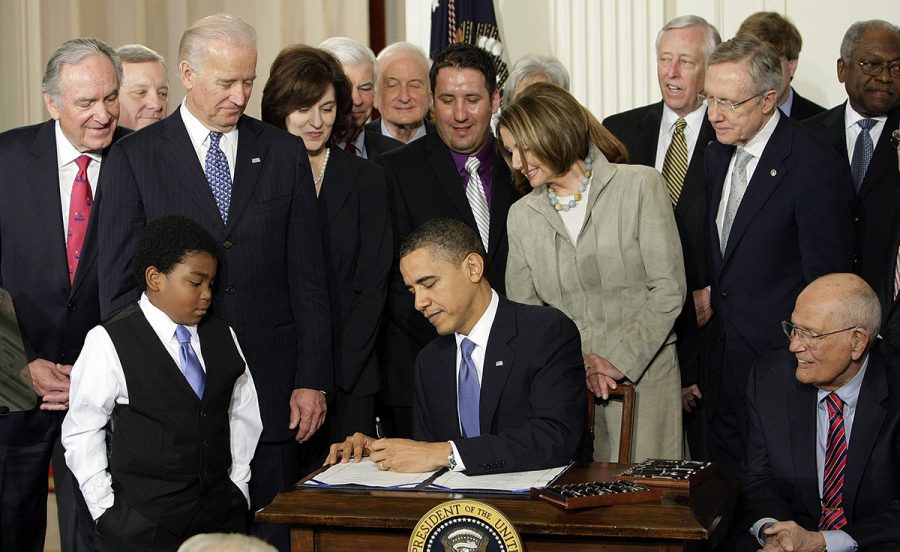 Former President Barack Obama, signed the Affordable Care Act in March of 2010. The recent action taken by the current President, Donald Trump, Friday Jan. 20 freezes many implications of the act.

Discussions about the Affordable Care Act (ACA) and its impacts are brought back into the light due to recent actions taken by President Donald Trump Friday Jan. 20 to stop implementation of preliminary sections of the ACA.

Rodd Freitag, a UW-Eau Claire political science professor and social studies committee chair, said the ACA — also known as “Obama Care” — is the latest of the attempts by previous presidents to address the primary problem of a lack of insurance coverage throughout the United States.

The ACA’s main effect on college-age students, Freitag said is the ability to stay covered during the cost heavy process of going through the higher education system.

“The fact that the Affordable Care Act requires that insurance companies allow kids to be on their parent’s insurance until the age of 26 is a big deal,” Freitag said.

“It impacts people’s health by the insurance choices that are available to them but it also impacts their economics,” Garcia said, “And as a small business owner, I see that.”

She said there is a large number of people who are currently receiving insurance under the ACA and after speaking with the local county health administrator, she found that there are 4,000 people in Eau Claire who will be without insurance coverage if it is abolished.

Garcia said she was interested in having support in preventing the repeal of the ACA and reached out to the march coordinators to become a speaker. One of the main points she said she stressed in her speech was the impact on presently insured people who will be unable to afford health care due to the ACA’s provisions.

“I don’t believe that repealing the ACA until there is an effective replacement is a responsible thing to do, by any legislature,” Garcia said. “You just can’t take away something that has provided coverage for these individuals that they count on to continue their life.”

Prior to President Trump’s inauguration day, hundreds of Eau Claire citizens gathered downtown Sunday, Jan. 15 outside the U.S. Federal Building on South Barstow Street, rallying to halt the repeal of the ACA by the president upon his induction, according to an article from WEAU.

But not all Eau Claire citizens are against the repeal.

Two members of the Eau Claire College Republicans, Nathan Kane and Ryan Ring, both agreed that the ACA should be repealed.

Ring is a sophomore accounting and finance student, the fundraising director for the Eau Claire group and secretary for the Wisconsin Federation of College Republicans. As someone who is directly affected by the ACA, Ring said he saw firsthand its negatives.

Being a student, Ring said he can only work 25 hours a week and can’t exceed those hours, otherwise he will not be paid for the extra hours of work. It has also affected him in his personal life with his mom no longer being able to afford having herself, Ring and his brother all on one plan.

As a sophomore political science student and the treasurer of the Eau Claire chapter, Kane said he understands the impacts of the ACA on not only college students but other U.S. citizens.

“I think it is easy to forget how many stories there are like Ryan, it wasn’t branded this way,” Kane said. “But essentially what Obamacare was, was an extension to 14 to 15 million people to get insurance, and as a result, it was going to severely impact the insurance of 200 million more Americans and that is something that generally gets overlooked.”

Both Ring and Kane said they are eager to see what is to come of recent events and from President Trump’s time in office as a whole.

Friday Jan. 20, President Trump signed an executive order which put regulatory freeze on the ACA implementation, ceasing all new pieces of the act that have not been fully implemented. Further action taken by President Trump will need approval of the Congress before it can be set into motion.

More information about the ACA can be found at healthcare.gov.