Poor off-campus housing leads to discussion between students and officials 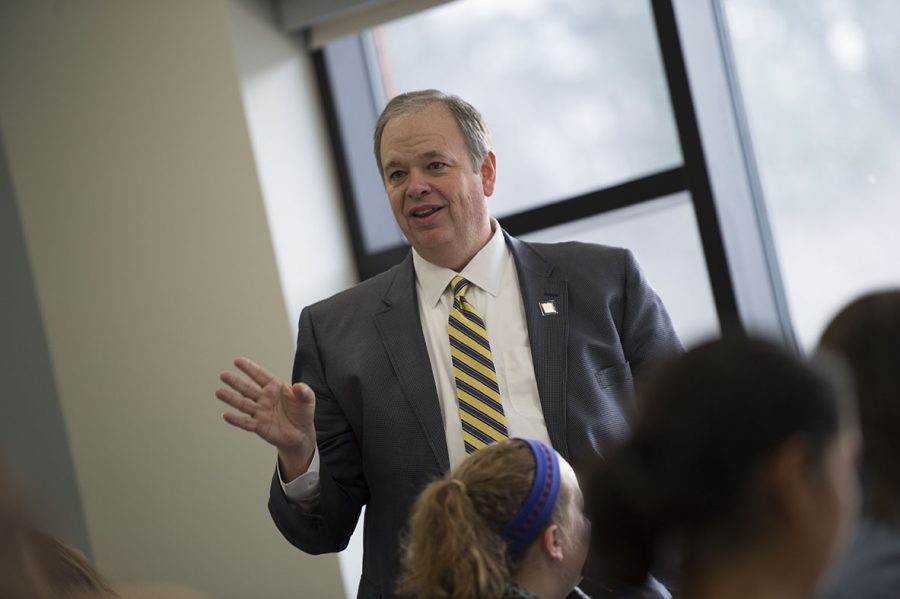 Though the panelists offered some solutions and steps students could take against unfair off-campus housing treatment, the market is currently unbalanced to a point that landlords have more power than normal due to limited supply and high demand.

Bats. Black mold. Asbestos. These are just a few of the issues UW-Eau Claire students said they have dealt with while living in off-campus housing.

“The way that we are going right now, and the way these houses are set up, somebody is going to die,” said Nick Webber, a junior at Eau Claire studying political science.

At the Chancellor’s Roundtable, held on Friday in the Ho-Chunk room of Davies Student Center, students had the opportunity to share and discuss off-campus living problems with a panel of five city and university officials.

Issues ranged from health dangers such as mold or animal infestations to problematic leases and unaccommodating landlords. Scott Small, a junior pre-law student, brought up what many students call “homeless week.”

Small explained there is a gap between school and leases ending and next year’s leases beginning, leaving a period where students are left with nowhere to live. He said his experience with this resulted in him living out of his car and showering at the YMCA.

“It literally is a homeless week for a lot of people,” Small said. “If you’re not fortunate enough to have a friend who has a place for you to sleep, a couch for you to sleep on or whatever, you’re going to be living out of your car. And it really, really sucks.”

Another student said she rents from a place where there is an incentive allowing for renters to move in early if they are renting one of their properties. She said even if the landlord isn’t favorable, the incentive is enough to keep her business.

Unfavorable landlords were a common grievance students brought up. Many said they reported problems to the landlord only to have their complaint ignored or having the landlord claim they had handled the issue when in reality, nothing had changed.

Story after story of generally poor living conditions revealed these issues to be widespread among students in off-campus housing. Most of all, students said they felt helpless when facing such dilemmas because they thought if they reported it, they would end up with nowhere to live.

Both the panelists and the chancellor expressed their disappointment and concern with the housing problems.

Chancellor James C. Schmidt attributed the problems and lack of action taken to the current nature of the housing market. He said the demand for living is far higher than the supply and due to the lack of on-campus housing, students are left with limited options.

“This institution has to take your safety seriously,” he said. “This has been a very disheartening conversation to hear.”

The chancellor said in the next few years, more on and off-campus university housing will be added which will help to alleviate some of the power landlords hold over students seeking housing.

There were several solutions offered for students facing such issues.

“The more you educate yourself on what your rights are,” said Doug Hoffer, Assistant City Attorney for the City of Eau Claire, “the better you’re going to be able to protect your rights and not be bullied by some of these landlords when they try to take advantage of you.”

Hoffer said students could report housing issues to university, local or state authorities and it was important to do so in order to push more widespread change. It is also important for students to understand what the problem is and why it is not acceptable before they call in, as a detailed report will result in more decisive action. He recommended the Wisconsin state tenant guide as a resource.

Hunter Clark is the student life coordinator for Student Senate. He said one of his biggest focuses in that position is advocating for student tenant rights. A Facebook page was created for students to post housing problems which can then be forwarded to the proper authorities.

Other options include consulting the university legal service or calling the health department directly. Dean of Students Joseph Abhold said the Student Senate plans to work on initiating a rental registration program that will heighten standards landlords will have to meet before renting out their properties.