Students verbally assaulted while Trump rally was on campus

Several UW-Eau Claire students and faculty deemed campus unsafe while rally was on campus, especially for students of color 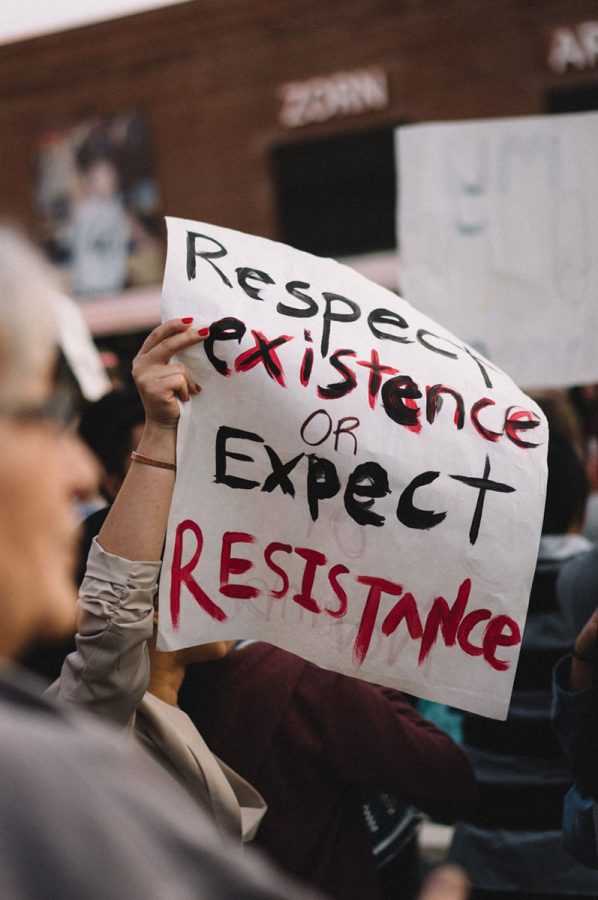 As people lined outside Zorn Arena waiting to get into the Donald Trump rally on Tuesday UW-Eau Claire students, faculty, staff and community members protested or stood in solidarity outside Hibbard Humanities Hall. Some professors cancelled their afternoon classes in Hibbard so students wouldn't have to walk through the lines that stretched from Garfield Avenue back along Putnam Drive behind the Nursing Building.

While classes were in session Tuesday thousands of rally-goers from various communities lined the campus sidewalk along Garfield Avenue waiting for Republican Presidential Nominee Donald Trump’s rally in Zorn Arena.

UW-Eau Claire students have been sharing their experiences of being verbally assaulted on Tuesday from those attending the rally. Students sharing these instances of receiving hate speech are most often people of color.

Hate speech is protected under the First Amendment as freedom of speech and defined as: speech that offends, threatens or insults groups based on race, color, religion, national origin, sexual orientation, disability or other traits.

Senior organizational communication student Kab Vwj said she was walking near campus when a truck drove past her with a sign asking people to vote for Trump and thank military members for their service. Vwj, a service member, was then spat at from the vehicle after making eye contact with someone inside.

There’s an assumption that only white heterosexual men are in the military, Vwj said. It was an insult she said she received for being a woman and a person of color.

“I think a lot of people are saying ‘Hey these Trump supporters are actually really nice,’” she said. “But if you think about it, the amount of people walking by, it’s not just verbal assaults, it’s the physical impeding of space and the safety of people in general.”

While on her way home from class senior biology student Taylor Isberner said she was walking past the line for the rally when she overheard a group of people making prejudiced comments so she quietly shook her head, while making eye-contact with the speaker.

She said it was then the person uttered, “It’s a shame queers like her will distort the political system.”

Isberner said she understands the campus was expected to allow the rally to occur on campus as a public university, but thinks student safety should have been a greater concern given the nature these rallies tend to have.

“With all the violence and hatred that has been surrounding the Trump rallies all summer there should have definitely been more thought put into it and more precautionary actions rather than just allowing it,” Isberner said.

Inter-Tribal Student Council (ITSC) President Savannah Rigert also said the campus should have done more to ensure student safety such as providing escorts to students who felt unsafe while walking around campus or telling them not to feel obliged to attend class.

Instead she took matters into her own hands. At a meeting with ITSC, which primarily consists of Native students, she said she encouraged students not to attend the protests outside the rally. She also offered to provide rides between upper and lower campus for students who didn’t feel safe walking past the lines.

“We talked about how it could be dangerous for them, with things being said and we didn’t know if anyone was going to be physical or not,” said Rigert, double majoring in American Indian Studies and social work.

Chancellor James C. Schmidt said he has asked for an evaluation to begin on how the university handled the event, so they can know where they can improve for next time.

“It was a very difficult day,” Schmidt said. “That is usually where there’s personal growth. I know that people were hurt by what was said and I feel terrible about that. It’s not my hope. I know there are people who felt unsafe and we are trying to look for different ways we can do it.”

However, if they denied the request for the Trump campaign to rent the arena, the university could have faced a large lawsuit, he said. The university doesn’t endorse any politics, he said, if it rents to one political speech it has to rent to any.

Under the Supreme Court hate actions are illegal and hate words are not, Schmidt said, and as chancellor he’s required to apply and promote the laws.

“I wish all of these conversations could happen in a civil manner, but from a legal perspective I can’t limit people’s’ free speech.” Schmidt said. “I think that’s a terribly dangerous thing to do.”

For a university to do its job it needs to have other points of view on campus and listening to others allows students to sharpen their arguments, he said. In an email to all faculty, students and staff on Tuesday Schmidt wrote “There is no idea too controversial to be discussed on our campus.”

Anthropology assistant professor Ari Anand said he disagrees. Speech that embodies ideas that certain people are subhuman disables people from participating in the conversation and doesn’t belong on campus, he said.

“If I’m encountering a form of speech that essentially tells me I’m subhuman, I’m not even an equal interactor in the debate,” Anand said. “There’s no starting point for conversation there.”

Speech needs to be thought of as something much larger than just speech, he said. If it’s disabling people, it’s a form of violence and to package that into ‘freedom of speech’ is problematic.

Anand was supposed to teach a class from 3:30 to 4:45 p.m. Tuesday in Hibbard Humanities Hall across from where people were waiting for the rally. But when students reached out to him the night before saying they would feel unsafe getting there he brought the concerns to higher administration and received permission from the Dean of Arts and Sciences to cancel class.

“I’m not satisfied by handling it and saying ‘Well if you feel afraid don’t come’ because then the class is only available to people who are not afraid,” he said.

Communication and journalism assistant professor Kristine Knutson also cancelled her 3:30 p.m. class because of student concerns, asking her students to study from home. Not only did she cancel to keep students physically safe, but the parking and congestion made it difficult for those who drive to class to access campus.

As a state school Knutson said the university ought to comply with requests from politicians to use the space, especially since Zorn Arena is the largest venue. However, the speech that’s been occurring leaves her considering what qualifies as free speech.

There’s a boundary between what’s uncomfortable and what’s unsafe, she said, and the community can help build a space where people are safe.