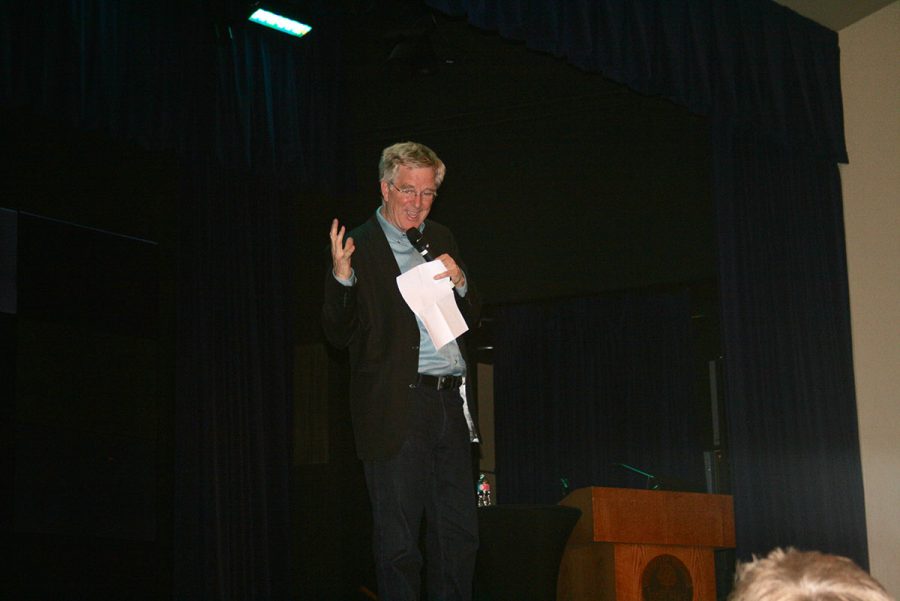 During his nearly two-hour speech, guidebook author and travel television host Rick Steves spoke about how America should take a more pragmatic approach to marijuana legislation, focused on harm reduction rather than criminalization.

America should take a look across the Atlantic at European approaches to marijuana, practices that focus on harm reduction rather than criminalization, award-winning guidebook author Rick Steves said.

“This is not soft on drugs. We’re going to try to be smart on drugs,” Steves told a crowd of about 450 in Schofield Auditorium Wednesday night. “And it’s not a matter of how many people you lock up, it’s how you reduce the harm that it has caused our society.”

During his talk, Steves argued for a more pragmatic approach to marijuana, and pointed toward the racial undercurrents present in United States’ drug policy. He also refuted common arguments against legalization.

Because of his extensive European travels, Steves said he feels impassioned to share how effective he finds the European take on drugs, in comparison to the U.S., where he said eight times the amount of arrests occur for possession alone.

It’s time America starts talking about it – educating the public of the drug’s potential health harms, he said, rather than criminalizing it. It’s crucial the conversation of legalizing marijuana is centered on policy reform, not glorifying the drug, Steves said.

“I never start talking about it without saying it’s a drug,” he said. “It can be abused. It’s not good for you. It’s not for children. But it’s a civil liberty if someone wants to use it.”

Steves drew a connection to the War on Drugs, which has primarily targeted marijuana over hard drugs like cocaine, to the prohibition of alcohol in the 1930s. He said there are many lessons for society to be gained from the movement’s ineffectiveness and counter productivity.

“There was a recognition that the law was more harmful than the drug itself,” Steves said.

What Steves said he finds to be even more problematic is the racial prejudices evident in the U.S.’s approach to marijuana.

“It (the illegality of marijuana) is the most easy way for racist people to disenfranchise black people,” he said.

Refuting the common claim that legalizing marijuana would be harmful to America’s youth, Steves said many organizations in Washington supported the movement because they understood the long-term repercussions a drug bust could have on a teenager.

“It goes with them forever, and that’s a tragic thing,” he said. “The best way to make a dangerous substance more dangerous is to make it illegal so you have no controls and it’s out there in the black market.”

In this sense, Steves said, teenagers would actually have less access to marijuana, similar to the current sales status of alcohol, where one must show valid identification to purchase it.

Steves’ speech created a casual atmosphere, speaking from notes and walking comfortably around the stage. Breaking the wall between audience and speaker, Steves gave away gifts to audience members who correctly answered trivia questions and held a question and answer session at the end of his remarks.

Audience member Lila Syverson said she found herself reconsidering her first thoughts on the issue of legalization, particularly when he spoke about issues of race. She said his experience traveling made his points even more eye-opening.

“I think it was enlightening,” Syverson said. “I think he has a more informed world view, and I think that opened another window just to look at things differently.”

Despite republican Donald Trump winning the presidency, Steves said he doesn’t think too much will change with the legalization and criminalization of marijuana. Not only did voters in California, Maine, Massachusetts and Nevada vote to legalize recreational marijuana, but “the numbers are in” from Colorado and Washington that validate legalization’s positive impacts, Steves said.

“It’s pretty tough to override the will of the people,” Steves said, “when it’s so solid and there’s a track record now.”