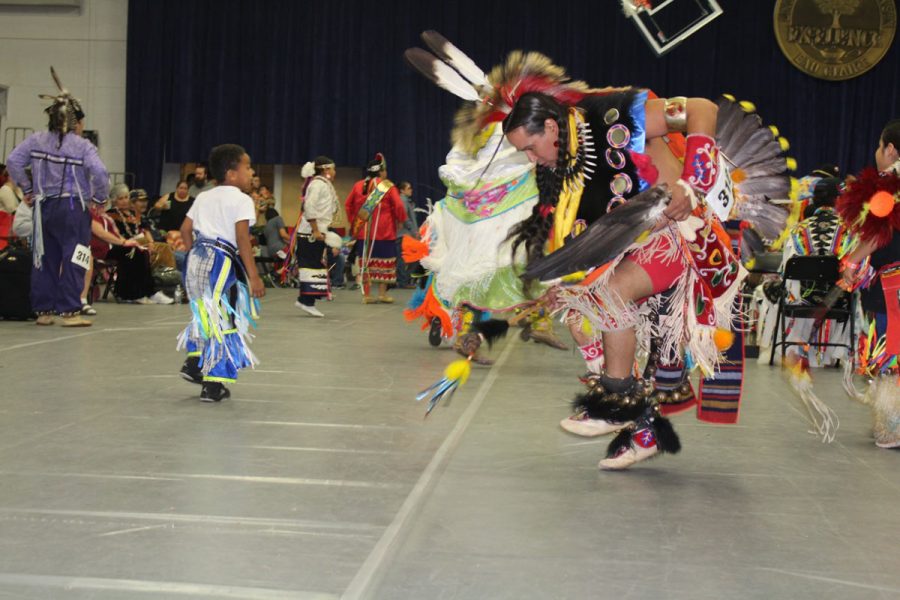 The annual event is put on by the Office of Multicultural Affairs and takes place during Native American Heritage Month, a time to celebrate, learn about and preserve Native American culture. The powwow is public, creating an environment for Native Americans and non-native community members to come together.

“I celebrate life and the fact that I breathe every day,” said Waylon Beareagle Wagner, a dancer at the powwow.

Wagner is from the Blackfoot reservation in Montana, but now resides in Medford with his wife and two sons. He said he is teaching his children how to dance, speak some Blackfeet words and appreciate tradition.

Uvalle Redknife, who also danced at the powwow, is a member of the Lipon Apache tribe and Ponca tribe of Oklahoma. He currently lives in Minneapolis and said he has been dancing since he could walk. Redknife said he attends 15 or more powwows per year and most enjoys the tradition and social nature of the gatherings.

Saturday’s powwow went beyond a cultural celebration and social event. It also fostered conversation of events occurring outside of Wisconsin, particularly the issue of the Dakota Access Pipeline protests in North Dakota.

“There’s something huge that’s going on in Standing Rock,” Redknife said, “It’s not just for native communities, it’s for all of us.”

ABC News reported the dispute over the Dakota Access oil pipeline has been ongoing since July 2016.

The Standing Rock Sioux, alongside other Native American tribes and environmental groups, are protesting the attempts by the Dallas-based Energy Transfer Partners to place the oil pipeline through sacred burial sites and near water sources, the Associated Press reported.

The protesters argue the pipeline threatens the water of the Sioux and millions of others that may be affected if the pipeline were to leak and contaminate the water.

Ginger Wilcox has attended the Honoring Education Powwow several times and said she enjoys celebrating and socializing with friends.

This year, she also attended as a representative of the Chippewa Valley Earth Keepers (CVEK), an organization committed to supporting the water protectors at Standing Rock, to raise awareness and support for the movement.

“We stand in solidarity because we know without the water, there is no life,” Wilcox said. “If this (the pipeline) were to leak into the Missouri, the Mississippi would also be contaminated. That’s the breadbasket of America. That’s what feeds our nation. If that’s contaminated, we’re done.”

Wilcox said the CVEK decided to bring their information to the powwow because they believed people there would agree with and support them. The organization is working to raise money and support for the protesters at Standing Rock.

Awareness and solidarity for Standing Rock is also coming from Minnesota. Redknife said he is working with other Minneapolis community members to fundraise for the Standing Rock protesters as well as to collect food, clothes, gas vouchers and any other supplies they may need.

Wagner also voiced his support for those standing against the pipeline. He said though there are pipelines in other places, people do not want one in a position to potentially affect water and food.

He said the powwow was a good place for bridging differences and gaining insight and perspective.

“It doesn’t matter where you come from or what race you are,” Wagner said. “We can all learn from each other and that’s what’s important, that every color comes together and learns.”