Administration and students engage in conversation on campus safety 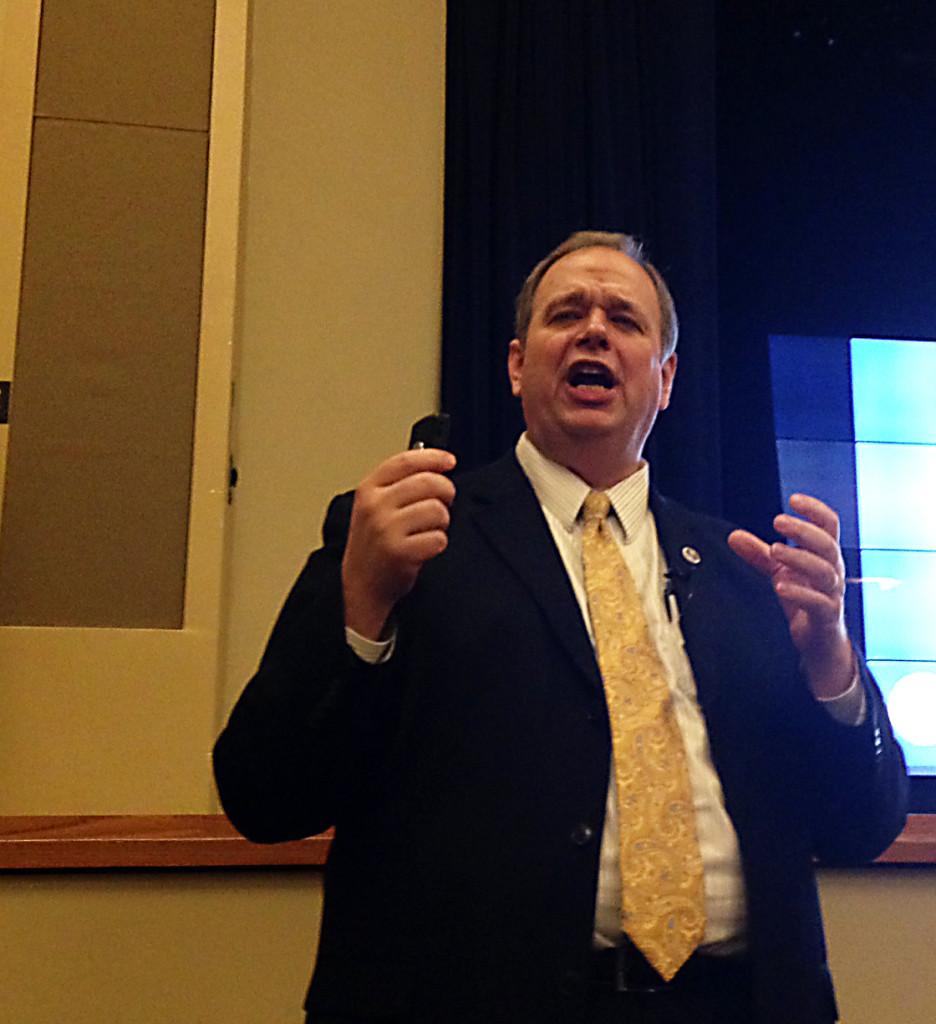 Chancellor Schmidt, pictured, said miscommunications and misunderstandings resulted in the negative experience of a UW-Eau Claire student. Much of Wednesday's Roundtable served as a forum for campus administrators and students to hold a discussion regarding campus security resources. (File Photo)

Campus security and campus building projects were discussed at the Chancellor’s Roundtable event, held at 12 p.m. on Nov. 9 in the Dakota Ballroom in the Davies Student Center.

Chancellor James C. Schmidt engaged an audience of about 40 people, mostly students, in conversation on these two topics. He was accompanied by Mike Rindo, the assistant chancellor for facilities and university relations, and David Sprick, the chief of the university police.

Campus security has been a particularly prevalent issue on campus since the Trump rally on Nov. 2 in Zorn Arena.

One student recorded a video of herself requesting and being denied a police escort to her car after participating in a protest against the rally. She then posted it to social media criticizing the university’s lack of security services for students. Watch the full video here.

The student in question, Kab Vwj, a senior organization of communication student, attended the discussion and asked how the university planned to progress.

Sprick clarified the functionality and purpose of the emergency phones. The caller is connected, not to the university police, but to an Eau Claire dispatch center that then redirects the call or handles the situation as they see fit.

Sprick added it is an emergency line and is meant to be used for extreme cases such as the instance of severe physical injury, fire or car accidents.

There is a non-emergency number students can use to call university police for help with less extreme situations.

With a staff of 11 full-time and two part-time university police officers, Sprick said it can be difficult to cover the entire campus 24/7. Furthermore, they cannot provide walking escorts to students because of limited manpower.

“We rely on people to call us if there is an unsafe situation,” Sprick said. “We are just a piece of many, many partners in our community to try to keep campus safe.”

In Vwj’s video, she asks what she should do if a walking escort is not possible. The dispatcher tells her he does not know and suggests she joins a group as a safety precaution.

The chancellor said the recording shows a breakdown of communication.

The dispatcher should have contacted university police so they could have provided help to the student, Schmidt said, and, in order to prevent further miscommunication, the university is working on increasing signage, education and knowledge of resources available to promote and enable student safety.

“We need to do better,” he said. “If someone doesn’t feel safe, they should be able to push the blue phone button and expect a response.”

Schmidt said mistakes will be made, but the university is looking to the future of improving campus climate.

He said the Equity, Diversity and Inclusivity (EDI) plan is a major piece in moving toward an inclusive campus. The initiative is currently being evaluated by shared governance representatives in the University Staff Council, Student Senate and University Senate.

In their most recent session, the University Senate passed a resolution endorsing the broad objectives of the EDI plan. The chancellor said the University Senate is the last unit of shared governance to approve the overall plan and the processes and conversations involved in approving the plan has been an important piece to ensuring the plan will make the changes it outlines.

“The main point is it’s important we do significant systemic change,” Schmidt said. “It does take time because at the heart of the matter, we’re asking people to look at themselves, reflect on their own experience and make change. That isn’t something I can do through the stroke of a pen.”

After the student population at Eau Claire skyrocketed from 900 to 11,000 students from the 1960s to the 1970s, Rindo said the campus infrastructure grew quickly as well. Subsequently, all the buildings are wearing out at the same rate.

New and majorly renovated residence halls and a new academic building are just a few of the prospective changes. The 2010-2030 Campus Master Plan can be found here.

The next Chancellor’s Roundtable discussion will take place at noon on Dec. 7 in the Chancellors Room (311) in Davies. The tentative topic of conversation is off-campus housing.