With Bernie Sanders' elimination as a candidate, former supporters consider what Hillary Clinton stands to offer 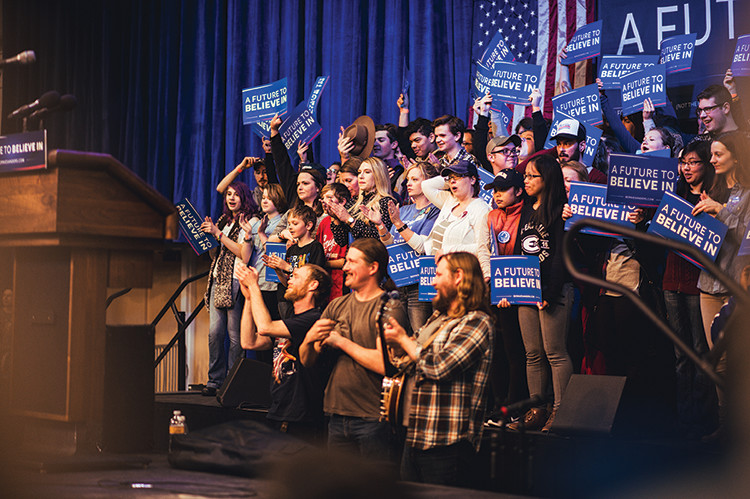 Bernie Sanders visited Zorn Arena on April 2, galvanizing many millenials with his message of unity and inequality. Now his supporters must look to other options to preserve what they can of their revolution. (Kelsey Smith)

Although it’s typically difficult to get up for an 8 a.m. class, thousands of students were up on a freezing Saturday morning in April, hours before Vermont Sen. Bernie Sanders took the stage.

The Sanders rally drew a crowd of over 3,000 in Zorn Arena. Among them was Sophomore Madison Bacon, a behavior analysis and creative writing student, who said the atmosphere was optimistic and positive at the event.

“It felt like we were listening to someone who understood us and sincerely wanted to help us have the best futures we could have,” Bacon said.

Freitag said the appeal of Sanders — as well as third party candidates and even Republican nominee Donald Trump — grounded itself in an anti-establishment and anti-elitist message.

The popularity of candidates like Sanders could also be attributed to the discontent and distrust in the federal government and our leaders, a phenomenon that has fluctuated over time.

According to surveys conducted by the Pew Research Center, only 19 percent of Americans believe the government will do what is right for its citizens most or all of the time.

1964 marked an all-time high trust rating in government at 77 percent. Since then, civil unrest, controversial wars and foreign policy, political scandals, economic uncertainty and terrorism have wracked America and eroded citizens’ faith in their government.

Another poll conducted by Pew Research Center found 20 percent of former Sanders supporters viewed Clinton as admirable and a potential figurehead who could unite the country while only 11 percent deemed Clinton an honest candidate.

When Sanders withdrew from the presidential race in June, he left his supporters with a difficult choice.

One reaction to Sanders’ withdrawal was the “Bernie or bust” movement; people refused to vote unless Sanders was the Democratic presidential nominee. Although it left many people feeling disenfranchised, Sanders himself said he did not support the movement and endorsed Clinton for president.

Bacon said although Sanders was her first choice for president, she now supports Clinton because her ideology is the most similar to her own, as Sanders was an advocate for LGBTQ rights, women’s rights, racial equality and economic equality.

For senior Rachel Esselman, a psychology and English rhetorics of science, technology, and culture student, it took some time before deciding to vote for Clinton, but Sanders’ endorsement made her choice easier.

“To me, a vote for Clinton is a vote for a Democratic presidency and the future of the Supreme Court,” Esselman said. “It’s a step towards the things Bernie was advocating for. We won’t be getting everything we wanted, but we’ll be getting a lot more than we would with Trump for president.”

Morgan Kubishak, a senior pursuing a comprehensive geology degree, said Sanders has consistently worked on inclusivity and fighting for minorities while Clinton’s has been a progression, citing her change of heart on same-sex marriage.

“Throughout her political career Clinton has become more inclusive,” Kubishak said. “Some of my peers feel that changes like this do not reflect an evolution in thinking but rather a power-hungry woman saying whatever she needs to get votes.”

Disgruntled millennials may decide to vote third party, but Kubishak said although she understands where Sanders supporters are coming from, neither of the third party candidates are qualified to be president. She said both Stein and Johnson could not handle the presidency, lacking the necessary knowledge and experience for the nation’s highest office.

Many millennials are now looking to an uncertain future, concerned regarding issues like increased political polarization and societal regression in civil liberties. Although many students believed Sanders would have alleviated these fears, to them, Clinton is the next best option.