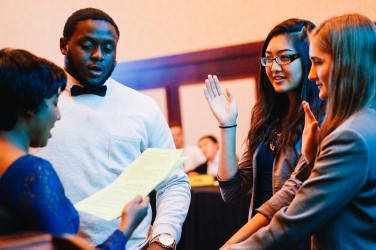 After a sighting of an individual dressed as a clown on the UW-Eau Claire campus surfaced on social media. Clown sightings have been sweeping the nation and Student Senate looked at what they could do for Eau Claire. They concluded not much could be done.

Senators Jacob Mussell and Branden Yates co-authored a resolution proposing a ban of costume masks on school grounds in response to students expressing fear of people dressed as clowns on campus. Mussell and Yates, who are both resident assistants at Eau Claire, received this feedback via social media and in person.

However, Yates said when he and Mussell met with the police, they were told the resolution would be impossible to enforce due to no illegalities in dressing up, even as a clown, and walking around campus.

With a 24-2-2 vote, the motion to table the resolution indefinitely was passed. Discussion may resume on the resolution at any time down the road, but it will not be voted up or down.

“We want to make it clear we are not tabling the issue at hand,” said Mussell. “We should still address it, have a conversation about it.”

Though the resolution itself was not passed, Mussell and Yates both said they plan to work with the campus police to increase student awareness of what resources are available for them to feel safe and secure at the university.

“I feel that our students should feel as safe as possible on campus,” Bursaw said. “I’d like to see more steps being taken.”

Bursaw said many of his friends have expressed that they do not feel safe on campus with people dressing up as clowns and neither does he.

The last three Senate positions were filled by Alexandra Kurutz, a first-year biology student with an emphasis in microbiology; Lillian Vang, also a first-year student, majoring in psychology; and Rashawn Williams, a sophomore studying business management.

Student Body President Ashley Sukhu said she is excited for the diversity, youth and energy they will bring to the organization, dominantly composed of white male upperclassmen.

“They’re all bright, inspiring individuals who are really going to make a change,” Sukhu said.

After the oath of office was complete, the three were welcomed by their fellow members rising to their feet, giving Kurutz, Vang and Williams a standing ovation.