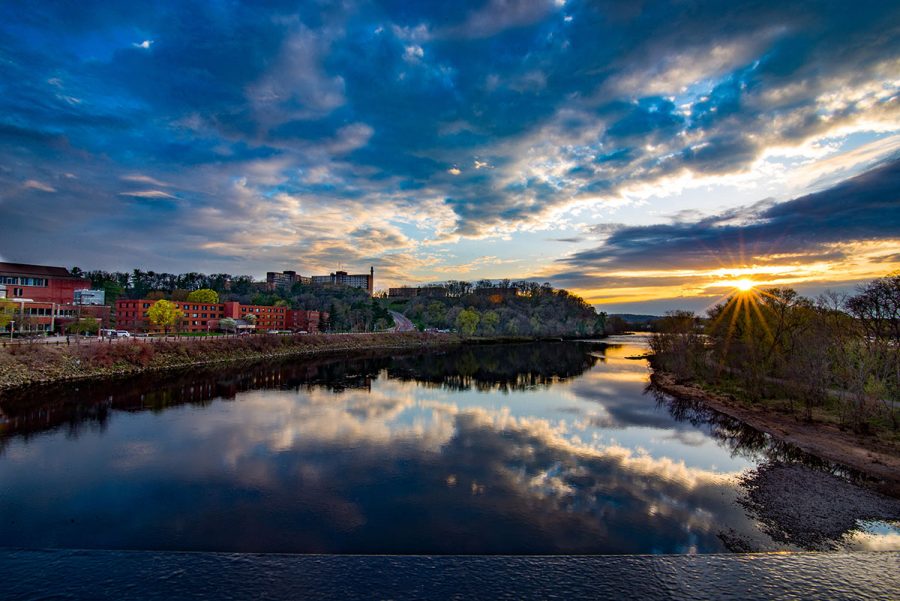 Matt Schrupp captures the university and its scenic position along the Chippewa River from the walking bridge at sunset (Submitted).

The sounds of camera shutters and long-distance runners serve as familiar noises to one particular UW-Eau Claire student.

Junior information systems student, Matt Schrupp, is a newcomer to photography in comparison to cross country and track and field — sports he’s participated in since he was young — but he continues to improve his skills and now has a major contest win to show for it.

Schrupp’s photos placed both second and third in a USA Today photo contest this year. The images are featured in the USA Today 2017 College Guide, released late last month, which showcases beautiful college campuses across the nation.

Schrupp said he would have won first place had his images been formatted a bit differently.

“Basically what she said was they were going to pick me as the winner, but since it’s a portrait magazine, they didn’t want to crop my photos or ruin the margins,” Schrupp said, “so they gave me second and third place instead since my photos weren’t vertical.”

When Schrupp heard about the contest from a former teammate, he knew he was interested. He said he contacted the woman in charge of the contest almost immediately to see how many photos he could submit.

With her permission to upload as many as he wanted, Schrupp entered approximately 20 of his photos of the Eau Claire campus.

“I didn’t have to change anything because if I’m bored or want to do something, I go to campus and take pictures, so I might have taken a couple new ones, but I definitely already knew the ones I wanted to send and the ones that would do well.”

Schrupp learned of his victory while staying at his girlfriend’s cabin in August, and he said they were both excited to hear the news.

“I read the email at least four times to make sure it was actually true,” Schrupp said.

He said he has always liked taking pictures with his phone camera. It wasn’t until he bought a nicer camera and took it with him to Wyoming after graduating high school he realized what kind of opportunities lay in the field of photography.

“I always have people asking me how I’ve gotten to where I am and how I’ve learned all this, but you just have to be curious,” Schrupp said. “You have to try to shoot outside of your comfort zone. Explore a lot and have fun with it.”

Now, more than three years later, after much experimenting, Schrupp said nature scenes and landscapes are among his favorite subjects to capture. He said Eau Claire serves as a pristine location for these shots.

Aside from the USA Today contest, Schrupp said he entered various other photo contests.

One such contest, held on Instagram, required a photograph of something small. Channeling his interest in nature, Schrupp captured an image of a dandelion that had gone to seed. The image won the contest and received a camera bag that otherwise would have cost roughly $200.

His photo showcasing the fall colors won a local contest in his hometown of Winona, Minnesota, and was published in the local newspaper. Schrupp said he continues to enter these contests and share his work so he can get his name out to the public.

Recently, Schrupp photographed the Northern Lights for the first time. He said he was happy he could finally check it off his bucket list, although he has more goals to achieve.

Schrupp said his dream shot includes snow-capped mountains, the Northern Lights, a large body of water and the Milky Way all in one.

For now, photography is mainly a hobby for Schrupp, although he sometimes makes money with his work. He said he hopes to own his own business someday, possibly combining information systems and photography so he can pursue both interests.

However, Schrupp said he wants to make sure photography doesn’t become work, but remains what it should be: fun.