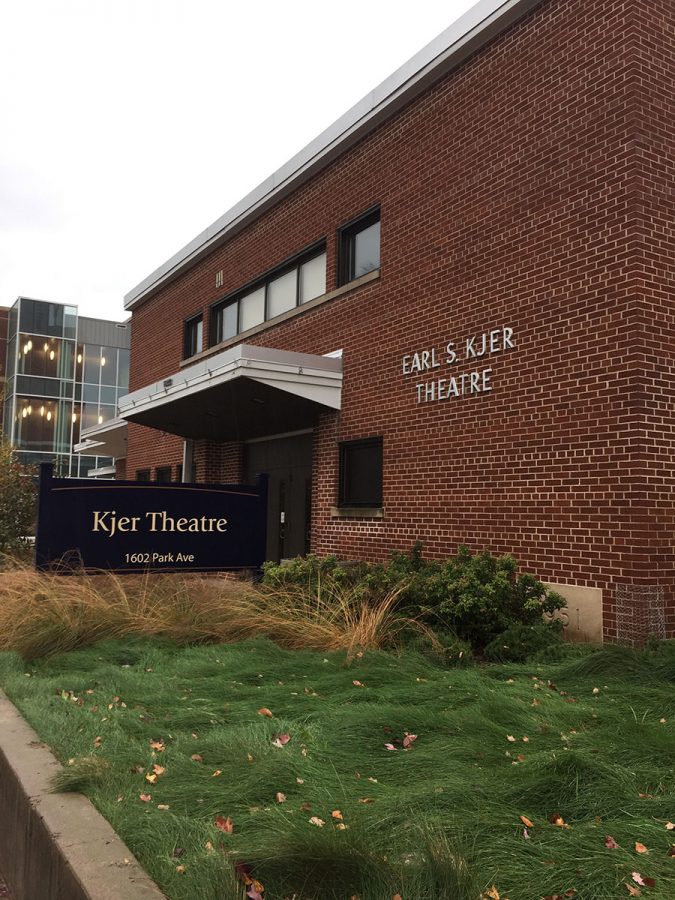 Students have reported seeing the ghost of Earl Kjer in the Kjer Theater on campus.

There’s a paranormal side to Eau Claire.

Specific locations, all within a few miles of campus, have their own paranormal story and history behind them.  Some of the locations allegedly haunted are Stones Throw Bar, Banbury Place and UW-Eau Claire’s very own Kjer Theater.

Chad Lewis, who studied psychology at UW-Stout, is a paranormal researcher who travels the world in search of stories about the supernatural and paranormal.

Stones Throw Bar, located at 304 Eau Claire St., is where a man supposedly hung himself in the basement of the restaurant and bar in the early 1900s.

Lewis said one of his favorite stories about the bar tells the tale of someone who was rehearsing for a show and suddenly, a shadow moved past him. The man turned around to look at the cord plugged into his guitar and found it snipped in half as if someone had cut it with a pair of scissors.

Another occasion was after the customers had left and the bar had closed. The bartender was getting ready to lock up and jokingly shouted, “Okay, everybody out!”

At that moment, a previously unnoticed figure stood up from his chair, shook out his jacket and walked to the front door where he instantly vanished into thin air.  The bartender left and never again returned to his job.

Banbury Place, located on 800 Wisconsin St.,  used to be a rubber factory dating back into the early 1900s.

Lewis said there was a gentleman who was growing marijuana in the electrical box of building thirteen and got electrocuted. No one found his body for several days.

“When they did (find his the body) it was turned to mush and was a puddle of skin and bones,” Lewis said.

Building thirteen is allegedly the scariest building in Banbury Place and since workers died from tragic accidents in the past, people have heard strange sounds including moans, screams and the hum of an old air conditioning unit.

Management at Banbury Place declined to comment on any paranormal activity happening there.

“The most fun is the adventure of getting out to these (haunted) places. If you’re not getting scared, you’re not trying hard enough,” Lewis said.  “Even if people don’t believe, they are curious and want to have fun with it.  I encourage people to get out there and decide for themselves.”

The Kjer Theater is named after Earl S. Kjer, a professor who taught drama and speech at Eau Claire starting in 1943. He died at the age of 61 of a severe heart attack and was buried in Forest Hill Cemetery.

But it is said that his spirit lives on through his theater.

During a dress rehearsal for a show, Inman said he was looking out into the audience and saw a shadowy white figure.

“It had a representation of a human shape but it was also blurry and not clear,” Inman said, “and when I looked back, it was gone.”

Lewis said students used to contact him and say during rehearsals, when the auditorium should have been completely empty, they would look into the audience and see a man whose appearance resembled 1950s or ‘60s style. He would then vanish right before their eyes.

“(Kjer) loved the theater so much that he wants to continue doing it from the grave,” Lewis said. “This is just part of the theater and another aspect of its history that adds a little mystery to it.”

Inman said he thinks if Earl isn’t a fan of the show, he will tamper with the lights, props and curtains and the ghost of Earl Kjer has been seen sitting in his favorite seat in the theater.

Lewis said he, as well as the members of the cast for “The Last Five Years,” haven’t had any experiences with Earl for this show yet.