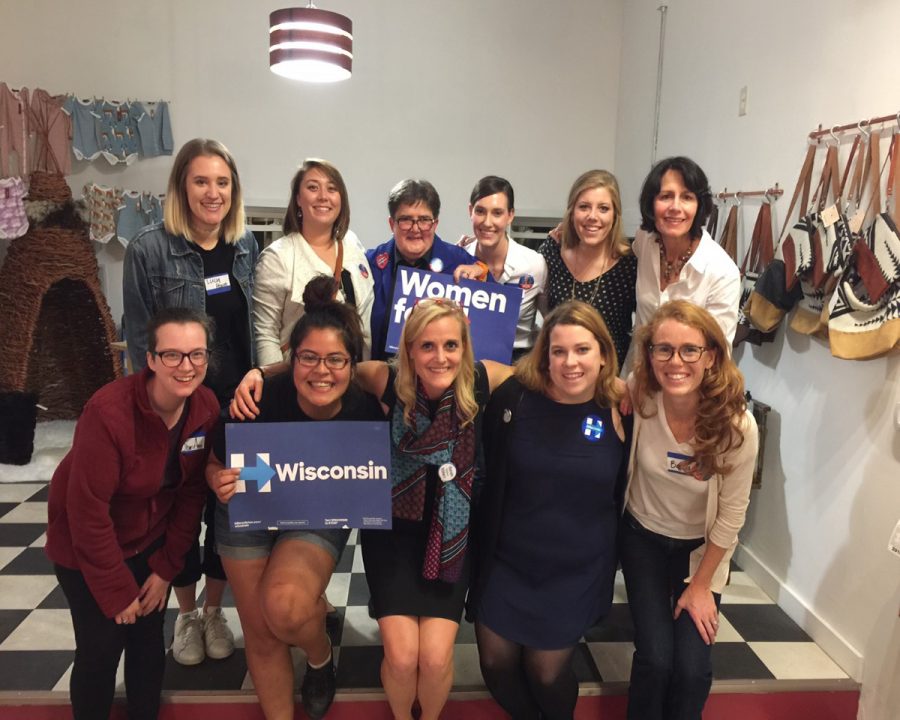 Speakers discussed female empowerment and equal representation over champagne and cupcakes at a panel discussion, held 6:30 p.m. on Oct. 11 at Red’s Mercantile in downtown Eau Claire.

A wide variety of political positions were represented by the women on the panel. Kate Beaton, a UW-Eau Claire graduate and recently elected Eau Claire City Council member, was seated next to Allida Black, a world-renowned scholar of Eleanor Roosevelt and a close friend of Hillary Clinton.

The other panel members included Barbara Lawton, former Lt. Gov. of Wisconsin and the first female to hold that position; Sarah Godlewski, who worked for the Secretary of Defense for over a decade and is now the Director of Women’s Outreach for Hillary Clinton; and Kristen Dexter, a former representative of the Wisconsin State Assembly.

The women talked about gender equality issues, obstacles they have faced as women in politics and what actions they believe need to be taken to in order to best represent women nationally — a narrative interwoven with emphasizing the necessity of getting Hillary Clinton elected for president.

“It is so important that women demonstrate their commitment to leading in this country,” Lawton said, “And to being sure we make the changes to make that possible.”

Lawton was the first woman to be elected lieutenant governor in Wisconsin. No woman has ever held the position of governor for the state.

Agendas change when women are in office, she said, and right now, women are politically underrepresented. Though entering the male-dominated field is more difficult for women, she said doing so is imperative to initiate change.

“You have to have a sense of humor and a bit of grace,” Lawton said, “And then you just have to step past the men who are in your way and get going.”

Hillary Clinton is a prime example of the rising prominence of female politicians. She was a main point of discussion for the panelists, all of whom endorsed her. Beaton noted the importance of electing her to office in order to serve as a role model for young girls and other women.

Black explained how electing Clinton to office would help facilitate national gender equality progress. In one specific example, Black referenced a speech Clinton gave at the U.N. where she identified women’s rights as being inherently human rights.

She discussed the wrongful acts committed against women in a comprehensive manner not usually seen in the U.N. Black said such vocabulary is crucial to closing gaps and empowering women.

“That presence gave body armor and soul armor, if you will, to women around the world who risk their lives for justice in their home communities,” Black said. “Words do matter.”

The panel also dug into the value of holding female-based forums.

“We empower each other,” Beaton said. “Amazing things happen when women work together and I don’t think we should ever stop that.”

This sentiment was echoed by ShariAnn Katterhagen, a junior critical studies in literature student at Eau Claire. Parts of the discussion that resonated most with Katterhagen included having female-centered spaces for discussion and providing support for one another.

“While it is important to have spaces for everybody,” she said. “Nobody is going to understand my experiences as a woman like another woman.”

Jeremy Gragert, a graduate from Eau Claire and member of the progressive students and alumni group, said he attended the event to gain perspective. He said there is good reason for men to pay attention to such conversations. In a crowd of around 50, Gragert was one of only two males in attendance.

The synthesis of local, state and national voices was an interesting component to Gragert.

“It’s cool to see Eau Claire can be part of a national conversation and a national movement,” Gragert said.

All the panelists encouraged the audience to vote for Hillary Clinton and continue pushing for female political representation.

“We need our voices to be heard,” Godlewski said. “We have a lot more glass ceilings to shatter.”