Conflicting reasons for why the boards were taken down 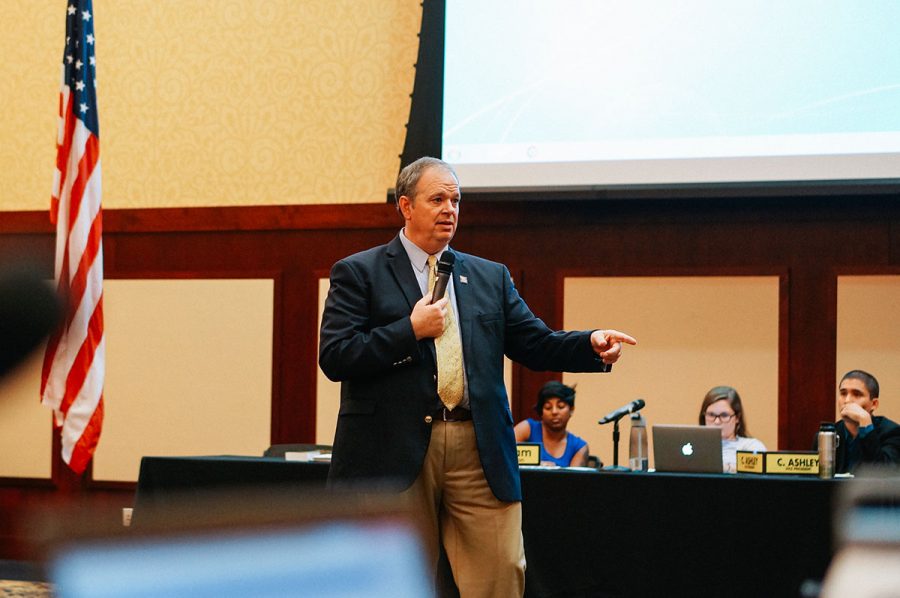 In a presentation to Student Senate, Chancellor James C. Schmidt said the free speech boards that were removed from campus  after “UWEC is racist” was painted on one resulted in a response from students stating the university administration is racist.

The boards weren’t taken down as a result of the “UWEC is racist” statement; rather, they were taken down according to schedule, Schmidt said.

The university must abide to the rules and guidelines established by student governance that regulate size and length of time signs can be displayed, he said. The guidelines are intended to retain the beauty of campus and maintain fair expression of opinions.

After “UWEC is racist” was painted on the signs, and before they were taken down, Schmidt said he participated in an early morning discussion where it was decided to keep the boards up; however, the janitorial staff had already removed the boards before the decision could be communicated.

However, the founder and current vice president of Young Americans for Liberty, the student organization that put the signs up, Brad Hanson, received an email from the university conference coordinator Monday morning after the comment was painted, demanding the sign be taken down immediately.

“I am not sure where those boards came from but they need to be removed immediately as they now have Racist remarks sprayed painted on them and specially facing Schofield Hall,” Christine Henricks wrote in the email to Hanson.

When Schmidt addressed the Senate, he said as soon as he heard the free speech boards were taken down, he wanted to put them back up himself.

In her email to Hanson, Henricks further wrote she was sure the Chancellor’s office would be in contact with his group and consequences were potentially in order since the boards were supposed to be removed on Friday afternoon.

As a result of the Senate vote two weeks ago, free speech boards will be back up from 2-4 p.m. Oct. 18 through the end of the week. The boards will be taken down on Saturday and Sunday but will return on Oct. 24 from 1-3 p.m.

During these time slots, Inclusivity/Outreach Coordinator Robert Nguyen said there will be members of the Senate available to talk with and educate students on free speech, diversity and other issues.

Schmidt said the dialogue that free speech creates is important to foster, even when the conversation may be uncomfortable or difficult.

“There is no idea too dangerous to be discussed on a university campus,” Schmidt said.

Schmidt said the Equity, Diversity and Inclusivity (EDI) Initiative will include faculty and staff development training to improve campus climate and he’s seeking shared governance support of the initiative.

Director Nathan Altmann said the Academic Affairs commission is working with faculty and staff to determine ways classroom settings can adjust to be as inclusive as possible.

Student Body President Ashley Sukhu said she supports the EDI, adding that many students have shared experiences of the campus being a non-inclusive environment — for instance, professors inadvertently saying racist remarks in class.

“I think it’s (the EDI) a really good thing. It’s just taking a while to roll out. A very long time to roll out,” Sukhu said. “Even as someone who is part of the process, I can feel myself being tense about it because it doesn’t feel like change is happening, but it just takes time.”

In other Senate news

Senate passed a resolution supporting Domestic Violence Awareness Month. Several Senate members voiced their support, including Chief of Staff Katy McGarry, who said she hopes to see other Senate members to vote up the bill and take an active role in raising awareness and supporting the cause.

Intergovernmental Affairs Director Nick Webber presented the fall legislative priority summary, which covers topics the Senate will address. The summary ranges from matters on Eau Claire campus all the way up to the national government.

The fall legislative priority summary was passed with a vocal majority.

In addition, the Senate approved the Vegan and Vegetarian Club to become an official student organization with a vote of 27-0-2.