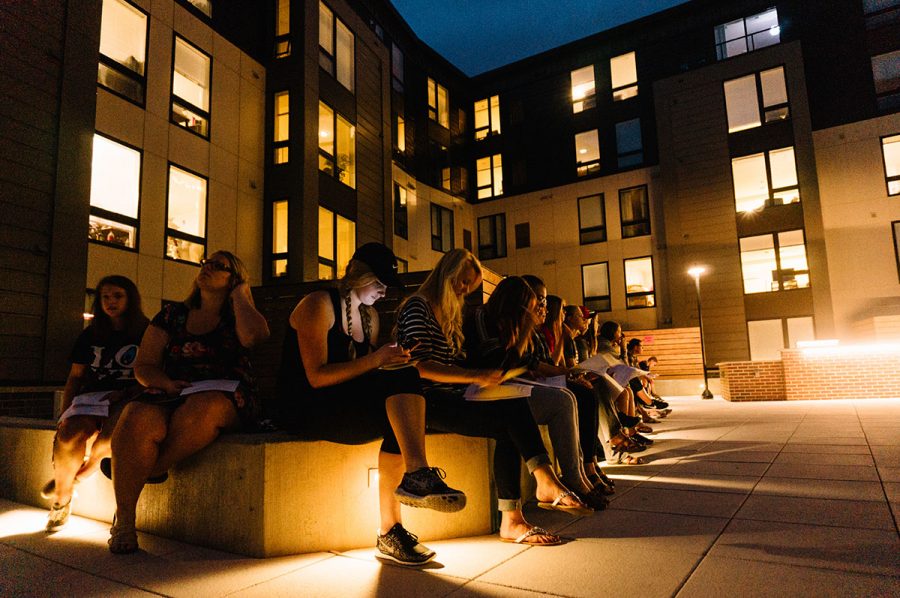 With the opening of Haymarket Landing downtown this fall, UW-Eau Claire is able to provide more residential space to students, meaning no overflow housing in hotels for only the third time in 20 years.

Haymarket Landing represents more than a place to live for 400 Eau Claire students. It’s the first step in a campus-wide initiative the university is taking to combat a chronic housing shortage that’s dogged it since the 70s.

Assistant chancellor for facilities and university relations, Mike Rindo said nine out of the 10 current residence halls were built between 1955-69, which leaves the university in a position where simply giving the existing buildings a facelift is increasingly less practical every year.

“This is a long-term problem and we’re taking a long-term solution to improve our housing situation,” Rindo said. “We have to do some renovations on our aging housing stock.”

To reach a goal of 5000 university-operated beds, Eau Claire is approaching the problem primarily from two angles: Expanding in the off-campus housing and replacing/upgrading the on-campus residence halls to adequately house students.

Initially, it was planned for a new residence hall to be completed by this year, in conjunction with leasing the Haymarket Landing housing on Barstow Street. Developers designed the hall to room upwards of 400 students in suite-style housing, a format more in line with the facilities at Chancellors or the Priory, which will be located at the tennis and basketball courts outside Horan Hall.

While administrators planned to open the new hall this fall when the plans were initially set in 2013, delays in development have limited the university in the short-term.

Rindo said the challenge now is to prepare the university for the loss of Towers, the largest residence hall on campus by a wide margin, which is scheduled to begin an extensive renovation process. Towers South will be taken offline in fall 2017. Towers North will follow in 2018.

“How do we find 600 beds for students while Towers is being renovated?” Rindo said, describing the overarching question the university and developers will grapple in the coming year. “We’re looking at a number of options.”

Towers is only the first priority in a long line of major changes that will occur in the coming years, Rindo said.

Along with the new hall currently in the works, the three oldest residence halls on campus—Katherine Thomas, Putnam and Horan—are no longer considered worthy investments. As it stands now, the plan is to demolish and replace a residence hall once every bi-annual state budget cycle.

Rindo said the goal is to diversify the new housing in a manner that is more appealing to residents. This means moving away from the closely-packed dorm style that halls like Towers utilize, in favor of apartment-style living spaces, which can feature kitchenettes, common living spaces, private laundry and other amenities.

Haymarket Landing may serve as a preview of what’s to come, if its spacious corridors, walk-in closets, studio apartments and open living areas are any indication.

The new housing is notably bare and everything isn’t in place yet, but in comparison to the on-campus housing, it’s “a huge upgrade, a really positive move,” said Benjamin Smethurst, a fifth-year senior public relations student who is serving as an RA at Haymarket Landing.

Smethhurst, a veteran of five semesters as an RA, said the main challenge with Haymarket Landing is the ratio of 80 students to one RA, versus the average ratio of 30 to RA in a dorm on campus.

This hasn’t deterred campus officials from offering a flexible variety of living arrangements that range from single-person studio apartments to four-person setups like they feature in Chancellors. Living arrangements are chosen by the students, irrespective of gender.

The reception by students, Smethurst said, has been overwhelmingly positive.

“In a more independent, distant living place … I was worried they would be closed off, but so far it seems like everyone has been super welcoming, they’ve been open with their questions,” Smethurst said. “I’m really happy this is the case.”

The fresh appearance and assortment of private luxuries typically absent from most housing were a major drawing point for most of the residents, which feature only one first-year student in a host of upper classmen.

“It’s newer. You don’t have to go down eight stories to use the washer or dryer. It’s got air conditioning,” Hannah Reed, a second-year microbiology student, said. “It’s a little far from campus, but the pros outweigh the cons.”

Haymarket Landing is part of the larger Confluence Project spearheaded by the UW-Eau Claire foundation to integrate the university and community more closely together and promote growth in the city’s resurrected downtown.