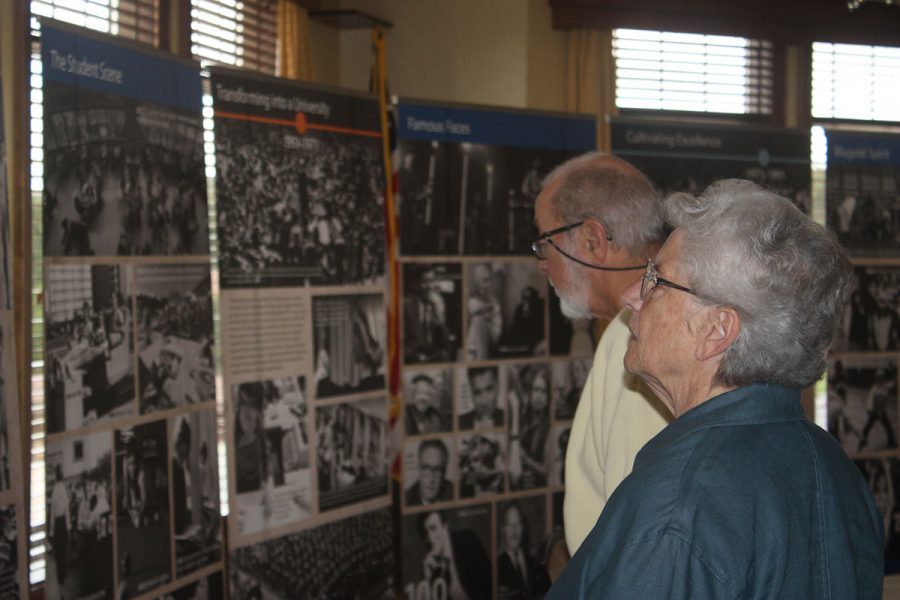 UW-Eau Claire alumni hailing from a host of decades and points on the map spent early Wednesday afternoon viewing the university’s centennial displays to get a grasp of the past, before Chancellor Schmidt gave a presentation outlining the future. (Gabriel Lagarde)

Between budget cuts, frozen tuition and scarce state funding, it may be a season of famine for the UW System, but, pitch a question to Chancellor James C. Schmidt regarding the state of the university and the response is upbeat and confident.

“This institution has reached so many of the aspirations I’ve worked so hard for in my previous places,” Schmidt said. “That is the power of ‘AND.’ That’s the Blugold difference.”

If his presentation is any indication, the chancellor may have good reason to be optimistic and proud.

Schmidt hosted an alumni luncheon, “Let’s do Lunch,” from noon-1 p.m. Wednesday at the Eau Claire Golf and Country Club to give a rundown of the state of the university, what it has achieved and where it can improve as Eau Claire takes leave of its first century and starts into its second.

“We ought to go after our mission with audacity and we ought to find joy in our work as an institution,” Schmidt said. “That joy doesn’t come from committee meetings. It’s in changing the lives of our students, our colleagues and our community.”

Here are some significant takeaways from the presentation:

— UW-Eau Claire was ranked by Money magazine as one of the top 50 public universities in the nation, in the top 100 for both private and public institutions, which Schmidt said are high marks in a field of roughly 840 colleges and universities nationally.

— The university sports has the lowest student debt among Minnesota and Wisconsin universities, although Schmidt identified it also as a point of concern that the average UW-Eau Claire student may be working around 30 hours a week to make ends meet.

— Schmidt said 46 percent of the class of 2016 participated in research with a faculty member, one of the main reasons why the university is ranked among the top three institutions for undergraduate research in the country.

— Schmidt said 96.1 percent of graduating students find job placements within six months of walking the stage in Zorn Arena. Accounting students in particular are in such high demand that commonly they’re signed by future employers 15 months before they graduate.

— The university has doubled the percentage of four-year graduates over the last decade, this indicates high retention rates, less debt and lower opportunity costs for graduates to make the most of their degrees from the onset. It has increased 29 percent in the last five.

— UW-Eau Claire ranks among the top 20 public institutions in the nation for study abroad opportunities. Roughly a third of all UW-Eau Claire students will travel to foreign regions to study during some point in their education.

— For high impact programs, of which study abroad is one, 85 percent of UW-Eau Claire students will participate in these endeavors, which Schmidt described as an “enviable position” for an institution. Campus administration has set a goal of 90 percent H.I. program retention.

— Approximately 80 percent of the university’s funding is directly tied to student tuition. For comparison, student tuition accounted for roughly 40 percent in the late 70s.

— Similarly, roughly 20 percent of degree costs are funded by the state. In the late 1970s, from 80-90 percent was accounted for by the state.

— UW-Eau Claire has increased its intake of new freshman to counteract the increase in four-year graduates. Schmidt said this was done despite stiffer competition among universities as the number of qualified, competent Wisconsin high school graduates is notably lower than ten or fifteen years ago.

— Schmidt spoke extensively on addressing the shifting racial demographics among the United State’s population. The university’s goal is to increase minority enrollment to 20 percent. He cited statistics that say 22 percent of area high schoolers were minority students. Looking further into the future, he estimated almost 40 percent of kindergarten students in Eau Claire schools are non-white.

While the luncheon was notably smaller than average, it still featured visiting graduates from as far away as Washington state and Tucson, Arizona.

Rich Daniels, a geography and computer science student who graduated in 1989, said the presentation gave him a sense of confidence in the direction the university is taking, although he included a point of criticism.

“I think (UW-Eau Claire) is very stable. I like its investment in infrastructure, so you know it’s going to continue on,” he said. “The only issue I had was when they started requiring a social service component. As a person that worked my way through college with some loans, it’s like now you’re requiring people to work 30-40 hours for free.”

Carol and Harvey Gunderson, class of 1978 and class of 1966 respectively, shared a unique perspective as graduates and former faculty at the university.

Harvey, who served as a professor of management and marketing from 1974-2000, said he was impressed by Schmidt’s energy and felt the university was in good hands.

“It makes me proud to be an alumnus and proud to be a professor emeritus,” Harvey said. “The effort that goes into this from the faculty and staff, it’s a long-term thing.”

Carol, a member of the Oneida Nation who helped to facilitate some of the first minority programs on campus, spoke admiringly of the university’s resiliency during the budget cuts.

“No matter what happens, we’re at the top, consistently,” she said. “It says a lot for the university.”

“Let’s do Lunch” is an event sponsored by the University of Wisconsin-Eau Claire Alumni Association that offers alumni and members of the public an opportunity to gauge the progress of the university and interact with administrators at a personal level. Wednesday’s luncheon marked the beginning of the 13th season of the event.

The next luncheon is scheduled for October 26 when Professor Geoff Peterson, chair of the political science department, gives a presentation titled “Two weeks until the election: What do we know?”