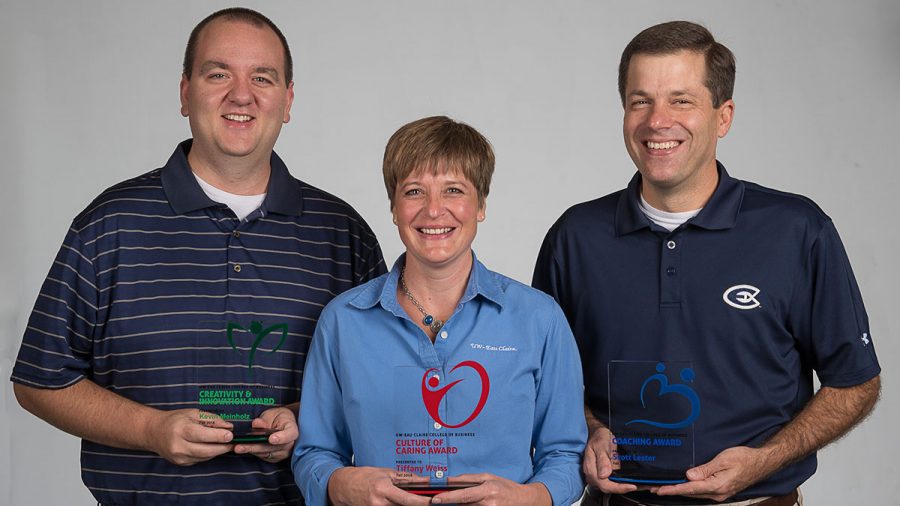 Kevin Meinholz (left), Tiffany Weiss (middle) and Dr. Scott Lester (right) were recognized for their contributions to the College of Business.

It’s beyond sticking to their roles as professors or coordinators. For the three recipients, it’s about what they can offer the students and faculty to better their education and experience on campus.

Scott Lester, Tiffany Weiss and Kevin Meinholz were recognized for being outstanding employees in the College of Business for 2016.

Professor of Management in the Department of Management and Marketing, Lester received the 2016 College of Business Coaching award, which recognizes an employee who improved the performance of students, faculty and staff through effective guidance, advising or mentoring, according to the UW-Eau Claire website.

“Our number one goal here is to mentor and coach our students,” Lester said. “One role I take seriously is mentoring our younger faculty and trying to help set them up to be successful as they embark on their career. To be acknowledged that the work I try to do in that area was well received felt really good.”

Rather than making the mentees dependent on the mentor, he focuses on making them independent, Lester said.

“The big job of a mentor is to help them know where to find information, he said, who to go to, how to go about reading a situation and know what other information I need to make a good decision.”

Lester said he has learned a lot about his profession during his 20 years at Eau Claire but being willing to pay attention to needs, listening and regularly communicating helped him earn the award.

“I try to be a team player to do what’s best for our department and the College of Business,” he said. “It’s a meaningful award. It’s given to you by your peers.”

Tiffany Weiss, career service and external activities coordinator, received the 2016 Culture of Caring Award. According to the Eau Claire website, this award recognizes an individual who consistently demonstrates outstanding personal and professional service to COB employees, students and their parents.

Weiss is responsible for helping students find internships and become business professionals. In terms of external activities, she helps coordinate new student initiatives for students in COB, bringing more students on campus and retention — keeping them here once they arrive. Weiss is also an advisor to her students.

“I like to take that extra personal step with students so they know someone cares — that it’s not a phase, that they’re not a phase,” she said, “but that you actually care about what’s going to happen to them today and in the future.”

Weiss said she enjoys going to her students’ sporting and music events so they know others are aware they’re participating on campus, other than attending class.

In being recognized and nominated by her peers, Weiss feels honored, humbled and motivated to continue her job as a coordinator and adviser and doing more for her students.

“Just making every student feel unique and important and, again, knowing that each person you meet with, you have the opportunity to make a difference in their day or experience here,” Weiss said.

Allison Jensen, senior and information systems student, said she loves Weiss and feels she has made an unparalleled impact on her experience on campus.

After having a difficult time passing her classes and choosing a major, Jensen said she almost gave up on college as a sophomore. Thanks to Weiss, Jensen found a major she is passionate about and will now graduate in December.

“If it wasn’t for Tiffany, I would probably be stuck in a degree and major I wasn’t passionate about,” she said. “Tiffany had faith in me when I didn’t have faith in myself. She never refuses to give 110 percent of what she has.”

Weiss always puts the students first and listens to their needs, Jensen said, so it’s only fitting that Weiss receives recognition for her hard work.

“I love her. She’s just an incredible and remarkable woman, and I hope someday I can be as influential to another young woman in my life as she has been to me,” Jensen said.

Enrollment and Retention Coordinator in the MBA office, Kevin Meinholz received the 2016 College of Business Creativity and Innovation Award. According to the Eau Claire website, the award recognizes a faculty or staff member who develops new or improved processes that allow the college to operate more effectively and better serve its students and other stakeholders.

As an enrollment and retention coordinator of the MBA Consortium, a business graduate program, Meinholz works and communicates with all partner campuses — who are contributing to MBA — to get their students into classes. He also maintains the MBA website, works with online and consortium students and provides technical support to students who are in MBA online classes.

Meinholz said he has always been working hard to find ways to improve in his area, the processes and help people he works with so they can do their job effectively. However, he said it was a team effort that helped him earn this award.

“The people whom I work with and I come up with ideas….we talk about them and figure out the best ways to do them,” he said. “So I do see it as more of a teamwork. I probably wouldn’t have won it if I didn’t have input from them.”

Meinholz also mentors Stephanie Barkley, a fifth year senior business management student. As a student worker in the College of Business, working alongside with Meinholz has been a great experience, she said.

Along with mentoring her as a student worker, he has been supportive and helped build her resume and provided references for jobs and internships, she said. Barkley said he has encouraged and pushed her to expand her boundaries.

“He’s given me a few more challenging projects,” Barkley said. “He’s helped me develop a professional role and build [business] skills I would need.”