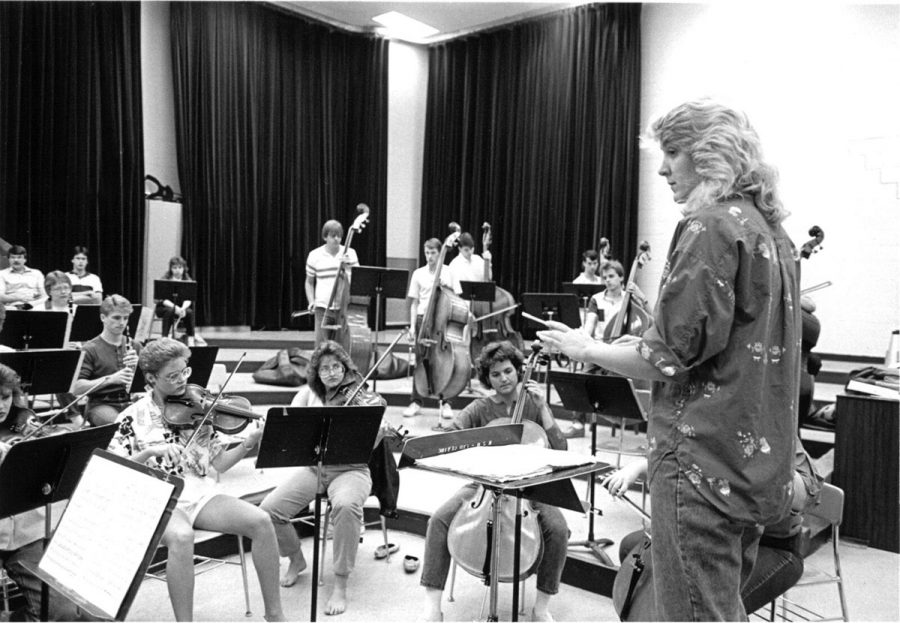 Students play their instruments in band practice, circa 1980s.

The Alumni Association, which has been around since 1921, is designed to keep Eau Claire graduates in contact with each other and the university. The association hosts many events for alumni, all of which can be found on their event calendar.

According to a Spectator article published June 4, 1925, the Alumni Association of what was then known as Eau Claire State Normal School, expected a turnout of more than 300 at the annual alumni banquet. The article states this number would be an increase from the previous year.

Today, the Alumni Association aims to serve the university’s 80,000 alumni.

The Alumni Day Reception will be held from 4:30-7:30 p.m. Friday, Sept. 30. A limited number of tickets are available to alumni and current and former faculty and staff for $5.50.

“Top Blugold Efforts” found in the 1999 Football Yearbook include:

According to Eau Claire’s webpage, the university offers eight sports to men and women alike, including basketball, swimming and tennis. Football and wrestling are available only to men, while women can participate in gymnastics, soccer, softball and volleyball.

The Eau Claire homecoming football game is 1 p.m. Saturday Oct. 1 in Carson Park. The team will be playing the UW-Stevens Point Pointers.

According to the site, the business school’s vision is “to be a leading regional College of Business recognized for our innovative teaching, distinctive academic programs and value-added educational experiences.”

From 5-8 p.m. Friday, Sept. 30, the College of Business will celebrate its 50th anniversary in Schofield Hall.

According to the UW-Eau Claire webpage, the Wind Symphony, conducted by Dr. John R. Stewart, has about 60 members. “The Wind Symphony has performed at many regional, national, and international conferences,” states the website.

Symphony band, conducted by Dr. Phillip A. Ostrander, performs four concerts every year and tours each spring, according to the website.

University Band, conducted by Dr. Randal C. Dickerson, offers “a place where you’ll be surrounded by passionate musicians and not have to complete an audition.” The only rule is that members must play because they love it, according to the site.

Blugold Marching Band, the largest Division III band in the nation, is comprised of 70 percent non-music majors. According to the website, members have the opportunity to perform at all home Blugold Football games, NFL games and more.

The Blugold Marching Band will be performing at the homecoming football game Saturday, Oct. 1.

Athletic Band, a student organization, directed by Nicholas Junker, welcomes “musicians of all levels” to “perform at 10-12 games from November-March.” The site encourages students to join by saying, “If you’re ready to hype up a crowd and cheer on UWEC’s athletes, this band is perfect for you!”