The man behind all UW-Eau Claire’s baked goods

Jim Solfest, manager of Hilltop Bakery, has been working at the university for 30 years 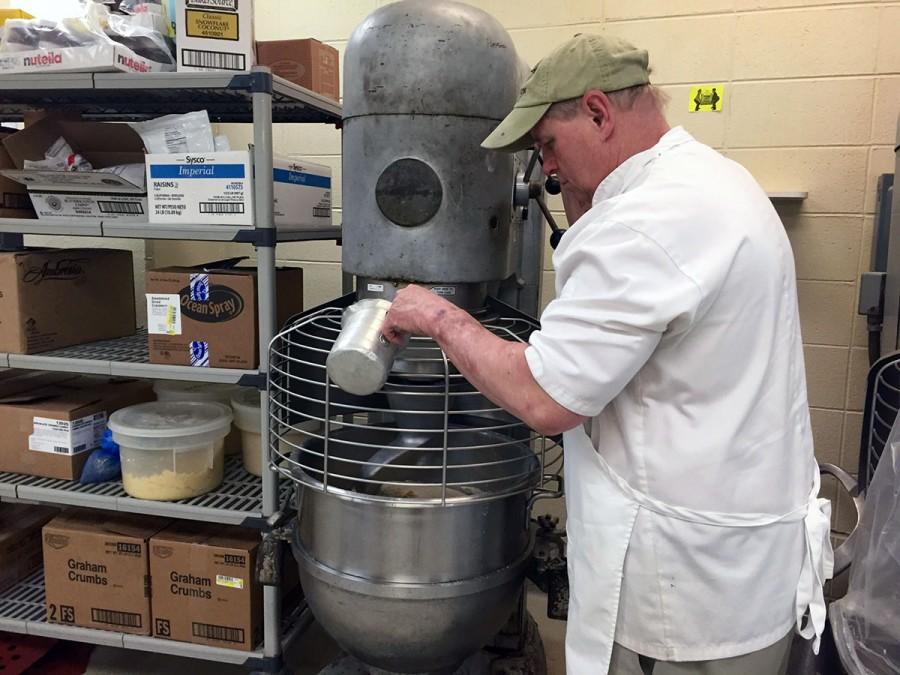 Jim Solfest, manager of Hilltop Bakery, makes a batch of dinner rolls for Hilltop Center. As manager for the past 23 years, Solfest is in charge of making all of the baked goods on campus.

It all started when he was a senior in high school, bagging groceries at a local supermarket on the west side of Eau Claire.

One day, a customer asked him if he wanted to work early in the morning in a bakery at the local university.

Flash forward 30 years and Jim Solfest is still “in the business,” now in his 23rd year as Hilltop Center’s bakery manager.

“It was good pay and I started frying donuts there. Then I went to school here for two years and from a series of events, I stayed in the business,” Solfest said. “So I’ve been in the business for a while.”

As manager, Solfest is in charge of all the baked goods — including cakes, cookies, donuts, muffins, bars, breads, rolls and much more — that pass through both Hilltop Center and the Davies Student Center.

Everything is made on site from scratch, besides a few exceptions, Solfest said.

Due to the demanding nature of providing all the baked goods on campus, Solfest and his employees use mixes for some of the cakes they serve in Hilltop and Davies, he said.

“When you’re in a time crunch, it’s easier,” Solfest said. “But in the long run, it costs more money than making everything ourselves.”

Still, all the cakes are mixed and baked on site.

“When you’re paying for mix, you’re paying someone else to make it from scratch and you’re paying them to put a lot of chemicals into it,” Solfest said, “so I can save money even if the labor’s a little more, because we’ve got people here anyway.”

From the moment Solfest took on his job at the university, he’s made it his own, constantly working to provide new treat options for students, faculty and staff. Solfest is always searching for new recipes to try, as well as ways to revamp old recipes.

“My biggest satisfaction is coming up with something new,” Solfest said, “packaging it, pricing it, putting it into the cafeteria, finding something people like and then having it become a mainstay.”

Mark Thornton, general manager of the Davies Center, said he remembers Solfest reaching above and beyond from the beginning.
“I’ve worked with Jim for many, many years, and besides being a great baker, he’s an outstanding person,” Thornton said. “He’s very dedicated and I can’t say how fortunate we are to have him.”

When Solfest first started at the bakery, he approached Thornton about baking cookies from his grandma’s old recipe for cut out cookies in honor of Christmas. Solfest hoped to sell the cookies in packs of five in Davies. Thornton allowed Solfest to try the recipe out.

When they tried it, Solfest remembered they sold over 16,000 cookies that December.

“We had a really hard time keeping up with that,” Solfest said. “After winterim, I thought we’d be done with that, at least until next December.”

But he was wrong. Soon, Thornton students and faculty were asking for more, absolutely smitten with the cookies, Thornton said.

“They’re definitely addicting. Jim must put something in those, because you can’t have just one,” Thornton joked.

Excited yet slightly overwhelmed by the success of the cookies, Solfest wanted to give students and faculty what they liked.

So he went right back to the kitchen and went to work.

At the time, “Jurassic Park” was becoming a hugely successful blockbuster, and Solfest found a way to capitalize on the movie’s popularity.

“So I found an egg cutter … and I started selling dinosaur eggs,” Solfest said, shaking his head and laughing.

Valentine’s Day came after, so Solfest found a heart cookie cutter. Soon, it was St. Patrick’s Day and he found a clover leaf cutter, then a tulip cutter for spring.

“Pretty soon it became a year round thing,” Solfest said. “I’ve got a huge bucket full of cutters now.”

These exact cookies can still be found in Davies to this day, Thornton said, and they remain a huge, consistent success.

“It’s kind of a classic example of what Jim brings to the table,” Thornton said.

But Solfest said he’s not usually right when it comes to what the students will like, which is why feedback is key to doing the best he can as bakery manager.

“What I like I can’t really say what I like the campus will like. I’m always wrong…. That’s fine, I’ll take it,” Solfest said. “Any feedback we can get is great.”

Regardless of his own involvement, whether a new recipe is unsuccessful, or a batch of cookies or bread doesn’t turn out as well as they’d hope, Solfest said he takes full responsibility, which he thinks is what makes his bakery such a positive working environment.

At the end of the day, Solfest said he constantly strives to get things “right,” and won’t stop until they are.