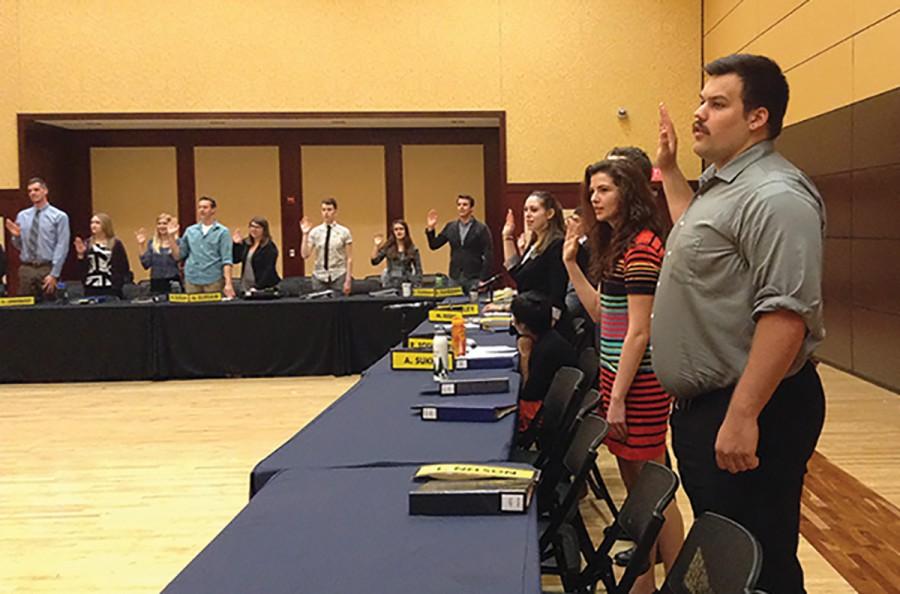 Student Senate begins its 60th Session and swears-in the 30 elected Senators as they perform the oath of office.

Elected senators waiting to be sworn into office filled the gallery and looked on as the 59th Session of Student Senate passed its final bill.

Senate approved updates to the Student Office of Sustainability bylaws to clarify the duties of the summer director of SOS.

A summer director position for SOS has been funded since 2014, but the job description has not been included in the commission’s bylaws, Director of Student Office of Sustainability Maria Delgado Gomez said.

Student Body President Jake Wrasse said since the position has been filled in 2014 there has been almost no set standards to ensure the summer director met expectations.

“So though this doesn’t drastically change the scope of what the position needs to do I believe it does create the same accountability and use of Student Senate fees that we have expected from all other areas of Senate,” Wrasse said.

Director of Academic Affairs Mathew Riedel said the updates to the bylaws would ensure sustainability is being pursued year round on campus, not just during school session.

Newly elected senators exchanged seats with outgoing senators to begin Senate’s  60th Session at Monday night’s meeting. The new president and vice president positions will take office May 9 during the last meeting of the semester.

Of the 30 appointed senator positions, 12 served on Senate’s 59th Session.