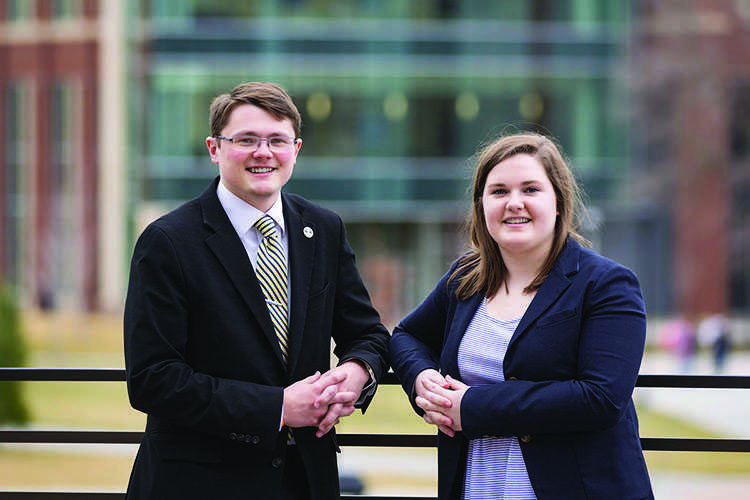 tudent body Vice President Jordan Mabin and Director of Intergovernmental Affairs Katy McGarry will be on the ballot for the 2016-2018 president and vice president position.

For the first time since the 2013 Student Senate election season there will be a contested president and vice president election. Vice President Jordan Mabin and Coordinator of Outreach and Inclusivity Ashley Sukhu are both running for the 2016-18 presidential position.

Mabin is running with Director of Intergovernmental Affairs Katy McGarry for vice president, while Sukhu partnered with Director of Campus Affairs Colton Ashley. The two campaigns debated Monday afternoon in the Woodland Theater.

After Gov. Scott Walker weakened shared governance in Wisconsin, Mabin said he and McGarry have helped build relationships with administrators without the state statute.

Sukhu said she wants to readdress a contract between student representatives and the chancellor to define their role in shared governance and share students needs.

“Yes it’s important that we let our government know the importance of shared governance,” Sukhu said, “but if the people on our campus don’t see the value in shared governance then it’s going to be very difficult for us to even make that impact on our national, even our state government.”

More on The Ashleys

The Ashleys, as they call themselves, met in the fall of 2013 in Blugold Beginnings before reconnecting when Sukhu joined Senate last fall.

Together they’re hoping to communicate with every department and organization on campus to ensure all areas of campus are represented and familiar with Student Senate, even if it means

Ashley said more communication needs to occur so students know they have a voice in how Senate allocates the $17 million in segregated fees students pay.

Although Sukhu and Ashley have different political views concerning the country, Ashley said when it concerns student government they often agree.

“I think it’s beneficial because both of us agree it’s necessary for us to have people with many different views,” Sukhu said, “because that’s the only way you actually get real well rounded decisions that actually benefit more people than just yourself.”

Both Mabin and McGarry started serving on Senate committees their first semesters at UW-Eau Claire before being elected to senator positions their second semesters.

They bring different experiences to their shared goals to create a balance, McGarry said. While Mabin brings an understanding of segregated fees and campus organizations, McGarry said as Intergovernmental Affairs director she can contribute the connections she’s made with legislators to represent the campus to the state and the nation.

Between the two of them, they’ve sat on every Senate committee, and shared the goals of strengthening student engagement and continuing collaboration with administration, Mabin said.

“We really want to hear from the students,” McGarry said. “Involvement is key because we don’t know everybody’s perspective.”

In order to reach as many students as possible, McGarry said it will require them to delegate outreach to other Senate positions.

Students can vote beginning 8 a.m., Monday, April 18 and 5 p.m. Wednesday April 19 in an online ballot sent to university emails.
Voters can choose up to 11 of the 15 on-campus senators  on the ballot and 19 of the 34 off-campus senators.