Chancellor’s rallying call: ‘It’s about us!’

Schmidt promises to fight for the financial future of the university amidst budget cuts. 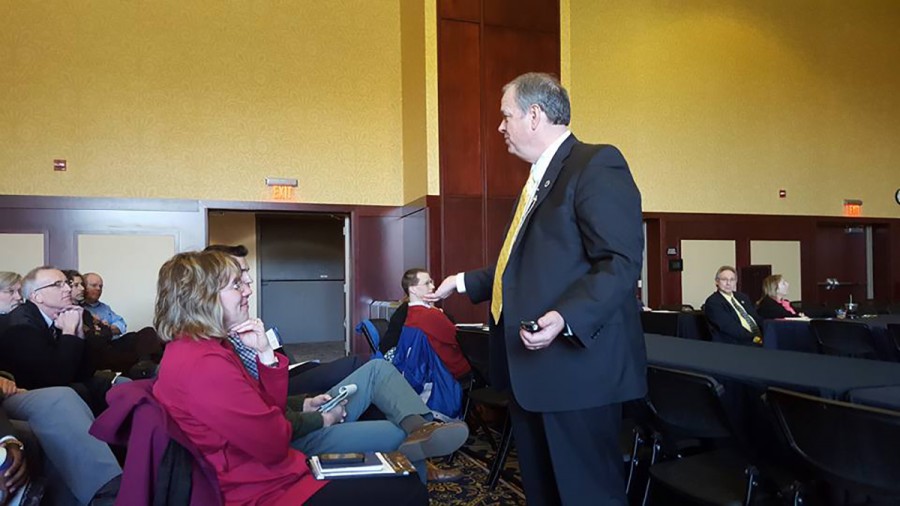 UW-Eau Claire isn’t going to fall victim to the whims of the state’s legislature in the coming months, if Chancellor James C. Schmidt has anything to say about it.

The chief administrator of the university spoke candidly — sometimes bluntly — during a budget forum addressed to about 100 people Tuesday in the Dakota Ballroom.

After updating the forum regarding the budget cuts, Schmidt outlined his efforts to galvanize business leaders and state politicians to put the UW-System first and discussed at length his opposition to the state tuition freeze, which he deemed misguided and ultimately detrimental to students.

Schmidt pushed for a greater level of activism from across the UW-System, a lack of which he said stemmed from the tendency of academics to consider the interests of the whole state and not focus on their own responsibilities: students.

“I have to be more selfish,” Schmidt said in regards to fighting for more state funding. “It’s about us, damn it!”

The chancellor’s call for action comes as the full implications of the July budget cuts start to take shape. UW-Eau Claire lost $12.2 million in state funding, 16 percent in state appropriation, and 179 members of its faculty and staff left in the months following Gov. Scott Walker’s approval of the $250 million cut, according to a document outlining the budget impact.

As a result, students lost one third of the faculty directly pertaining to their instruction. Class sizes have increased by 14 percent, classes with over 50 students increased by 36 percent and the university dropped 197 courses from its offerings, according to the document.

The chancellor reported the university is using the entirety of its general fund to meet the 2016 revenue shortfall, leaving little in reserve for potential pitfalls in the future, he said.

For a university system that has seen state funding decline from 59 percent in the mid-‘70s to 20 percent today and weathered budget cuts amounting to $1.3 billion since 2003, it is no longer a question whether the state has “gone too far” and Schmidt doubted colleges like UW-Eau Claire could cope with further reductions, he said.

“If we have another round of cuts like the ones we’ve had before,” Schmidt said, “we will have to lop off entire sections of the university.”

Schmidt said there is a two-month window to make a difference in the budget. In order to do this, he said, it comes down to legislators that put other interests before the needs of the UW-System and proponents of the UW-System who have to aggressively push for its prioritization.

This not only includes the activism of campus administrators and faculty but also the participation of business leaders and community groups, Schmidt said.

“My big message to legislators is that we can’t tolerate any more of these cuts and we are worthy of your investment,” Schmidt said. “They hold the cards. We’re asking that we be their top priority. The UW-System is a great economic investment for the state.”

Schmidt also offered answers to his critics during the forum in which he restated his goal to protect students and the quality of their education. He proceeded to debunk a series of “myths” regarding state funding and the viability of the UW-System.

One myth, Schmidt said, is the success of the tuition freeze that is active until the end of the 2016-17 school year. He said it is estimated a tuition increase of roughly $260 per semester would be enough to offer students the resources they would need, a hike resulting in little more than $1000 in total student debt.

Schmidt described the issue as one where it mattered little if the price tag was cheaper if the product was sub-par, especially considering the small increase in student debt, he said.

Ultimately, the struggle for the university is easier when he considers the students, Schmidt said.

“This place is worth fighting for,” Schmidt said. “The next two to three months, this is where much of my energy will go.”