Onetime presidential candidate delivers the facts behind the corruption of Congress 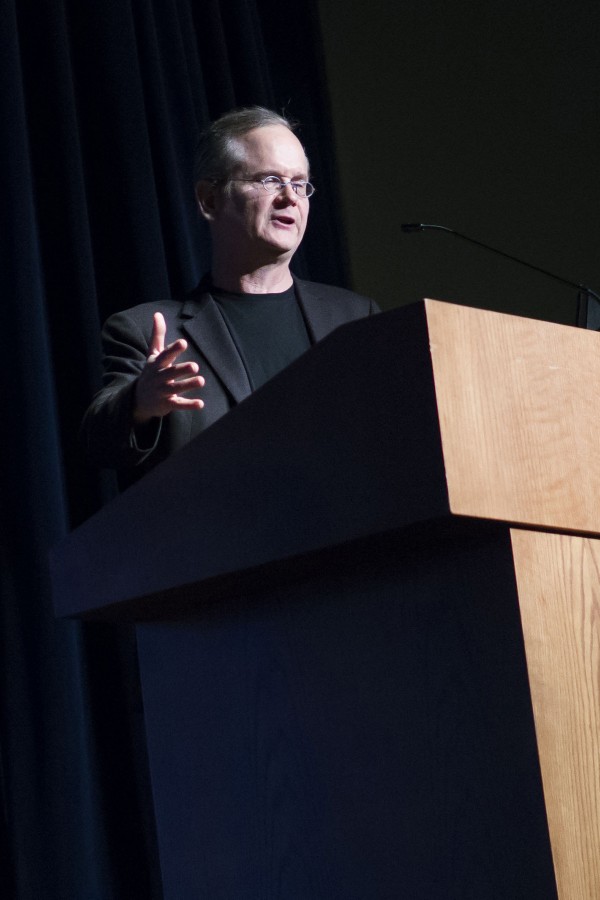 Harvard law professor Lawrence Lessig spoke about the faults of in the U.S. government on Wednesday in Schofield Auditorium.

Both Democrats and Republicans neglect voters’ wants and needs to seek the approval of the few who can fund their campaigns, a Harvard law professor said.

“Increasingly, we have a distracted democracy where the elites on both sides, the democrats and the republicans, have been distracted by this race for money,” Lawrence Lessig said.

Speaking to a crowd of more than 300 people Wednesday night in Schofield Auditorium, Lessig explained his three reasons for the loss of a representative democracy in the U.S.

“At the core of our democracy there is a hole where the framers imagined there would be a congress,” Lessig said. “A hole; a failed institution.”

Citing the unequal opportunity to vote as a cause of corruption, Lessig said 10 million Americans across the country had to wait more than 30 minutes to vote. This creates a poll tax for working Americans who can’t afford the time off, preventing them from voting, he said.

Also to blame is gerrymandering, the process of redrawing electoral district boundaries to favor a particular party, Lessig said. Of the 435 electoral positions in the House of Representatives, only 90 of the districts have competitive elections where the winning party isn’t predetermined, he said.

The fundamental flaw in the U.S. democracy occurs when money is involved, Lessig said. Members and candidates of congress can spend anywhere from 30-70 percent of their time on the pursuit of campaign money, he said.

“It develops in these members of Congress a sixth sense,” Lessig said, “a constant awareness about how what they do might affect their ability to raise money.”

The consequences are seen in the presidential election as elite candidates continue to seek the approval of their funders rather than voters, Lessig said. This allows candidates such as Donald Trump and Bernie Sanders to fill in the gaps and respond to the interests of voters.

Unless a way to fix Congress is implemented, Lessig said he doesn’t think it matters who’s elected.

“It turns out no amendment to constitution is actually necessary,” Lessig said. “Congress could pass the changes to make those three things happen tomorrow and it would change those three things if we could find a way to build a movement to demand it.”

Sarah Doroff, a junior special education student, said she enjoyed the forum more than she thought she would. Lessig used current events and culture to make his points, Doroff said, who agreed with many of the points Lessig made regarding how money has corrupted Congress. The amount of money the government handles causes distortion, she said.

Eau Claire resident John Hildebrand also attended the event and said points Lessig made in his speech related to circumstances familiar to Wisconsin. Hildebrand said he agreed with Lessig’s remarks on gerrymandering.

“I think it’s especially true in our state,” Hildebrand said.

Lessig said those who are not in the midst of the “insanity” are the ones who need to address the flaws.