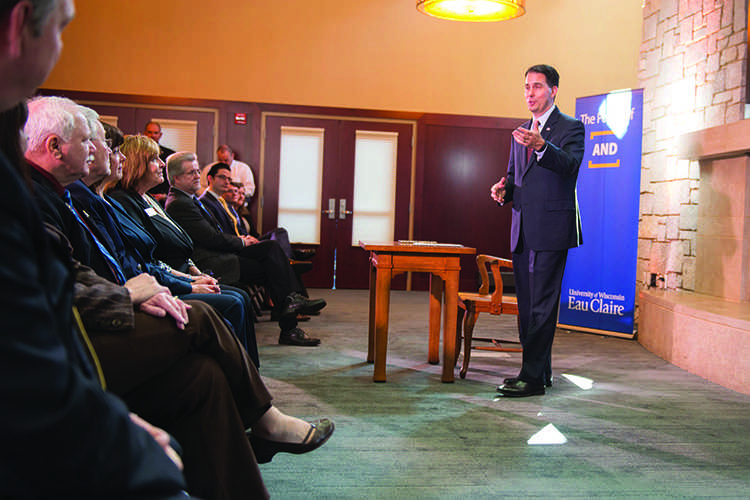 Gov. Scott Walker stopped by UW-Eau Claire monday to sign a bill that requires higher education institutions to mail students annual updates on their student loans. He addressed a group of about 30 in the Alumni Room of the Davies Center.

Gov. Scott Walker passed through UW-Eau Claire Monday to sign a bill that requires schools to send students a letter each year with personalized information on loans and cost of attendance.

Walker addressed a crowd of about 30 people – three of which were students – in a private signing event in the Alumni Room of the Davies Center.

“Today, it’s really about transparency,” Walker said to the gathering. “ … every institution of higher education will be required … to provide in writing what’s involved with the total cost of being a student enrolled there.”

Walker said the legislation he signed Monday is modeled after a similar innitiative in Indiana, which he said led to a 16 percent drop in the amount of loans students took out. He said the bill is meant to give students a better picture of how much it will cost to stay enrolled in school for an extra semester or year.

But, not all state legislators believe the bill – and other legislation under Walker’s college affordability legislative package – will actively help students. The bill passed predominantly with Republican votes. Rep. Katrina Shankland, D-Wis., sent out a media release the day after Walker signed the bill to say she “takes issue” with Walker’s claim to champion need-based aid.

“It’s clear this legislative package is more about election year politics than it is about helping our next generation of leaders,” Shankland said in the release.

Shankland said the package of bills are convenient for an election year, but “do not meaningfully help” student loan borrowers who are currently making payments on their student loan debt.

Some Eau Claire students said they can see benefits to the bill requiring the university to send financial information every year, but not for the reasons proposed.

Sophomore social work student Rebecca Whipple was not present at the signing, but she said she thinks the bill would be more useful for gathering data on student loan debt. She said she doesn’t see how the bill will affect her personally.

“I’ve already been keeping track of what I’m spending and my 10-year plan,” Whipple said, “so I think it’ll just be another reminder that I don’t need.”

The annual letter to students will contain the following information:

– An estimated total cost of attendance at their institution for the academic year.

– The cumulative total of state, federal and institutional grants the student receives.

Chancellor James C. Schmidt said he thinks Eau Claire’s financial aid office does a good job working with students to make sure they understand where they stand in terms of loan debt. He said this bill will be “yet another piece of information” families will have as they finance higher education.

“I think students should continue to learn even after they cross the stage and shake my hand,” Schmidt said, “but I also do want students to understand there is a cost to staying the fifth year.”