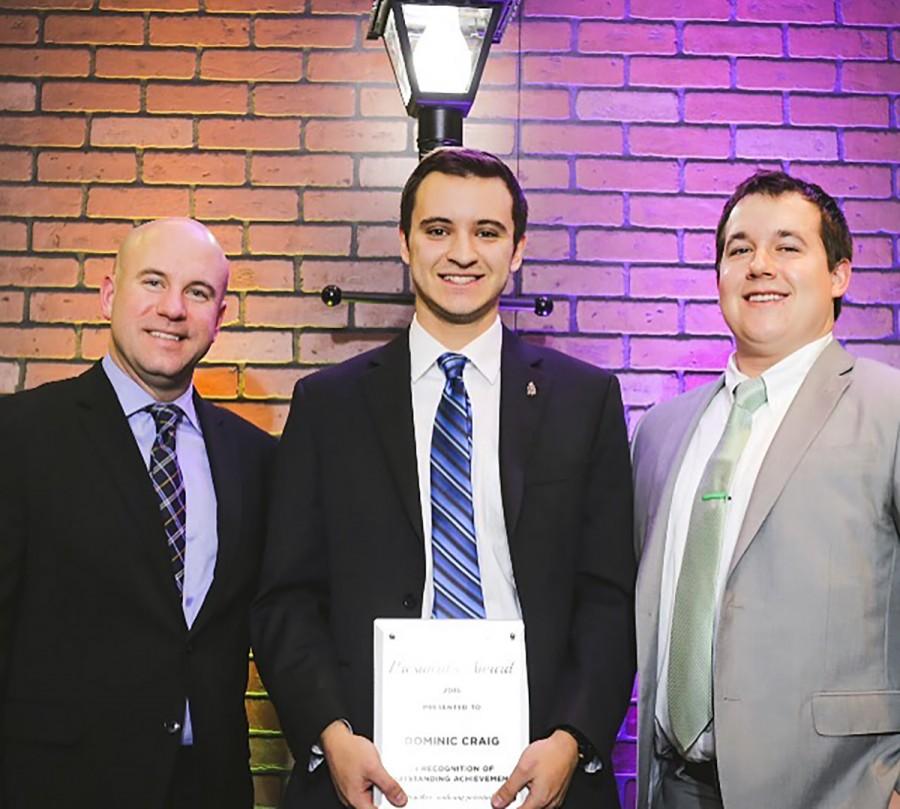 As winter comes to an end, Dominic Craig is already putting up signs and going door to door in order to make sales for the upcoming summer months for his own business.

Craig, a junior business student, has been named Rookie Entrepreneur of the Year by CollegePro. He owns a painting business that covers the Eau Claire, Menomonie and Altoona areas.

Franchise owners had to make $110,000 worth of sales in a year in order to win the award. Craig exceeded that goal by making $112,000 worth of sales. He received the award for this accomplishment as well as good customer service and the quality of his painting jobs.
Craig said the reason he believes he won was because of positive acknowledgement from customers.

Nick Lunde worked for Craig painting houses during the summer of 2015. Lunde called Craig “one of the most personable people” he knows. He said it’s one of the reasons people want to buy from Craig. Customers have thrown them pool parties and barbecues because they appreciate the extra effort Craig makes, Lunde said.

The two are friends, but Lunde said he doesn’t mind having his friend as his boss because Craig is good at “drawing the line between work and hanging out.” Another benefit is that he can trust Craig to make a lot of sales so his employees stay busy during the summer, Lunde said.

Craig employs ten painters who are mostly students and friends. He said if friends want a job they still have to go through an interview process. It’s easy to hire friends because he already trusts them and can count on them to do a good job, Craig said.

As a franchise owner, Craig does the marketing for the company by going door-to-door and booking appointments for the summer during the winter.

Craig has a “coach” as a franchise owner. The coach is a general manager who helps the franchise owner with “whatever they need.” Craig said if he has a problem and needs an answer his coach “will have the answer” no matter what the problem is.

CollegePro set daily goals that serve as a source of motivation, Craig said. He was applying for a manager position at the company when the interviewer asked him if he wanted to be a franchise owner from the beginning, he said.

Craig said business has interested him since he was 14 years old. He also acknowledged the help from his fraternity Pi Sigma Epsilon, which helped him get involved with the company.

During his career, he wants to sell a product that he believes is going to help customers, Craig said. One of his mottos is the CollegePro motto: “Deliver on your promise.” He lives by that as a business owner and said he plans to work for CollegePro until he graduates.
Craig said the goal he’s setting for his business next year is to make $150,000 in sales.