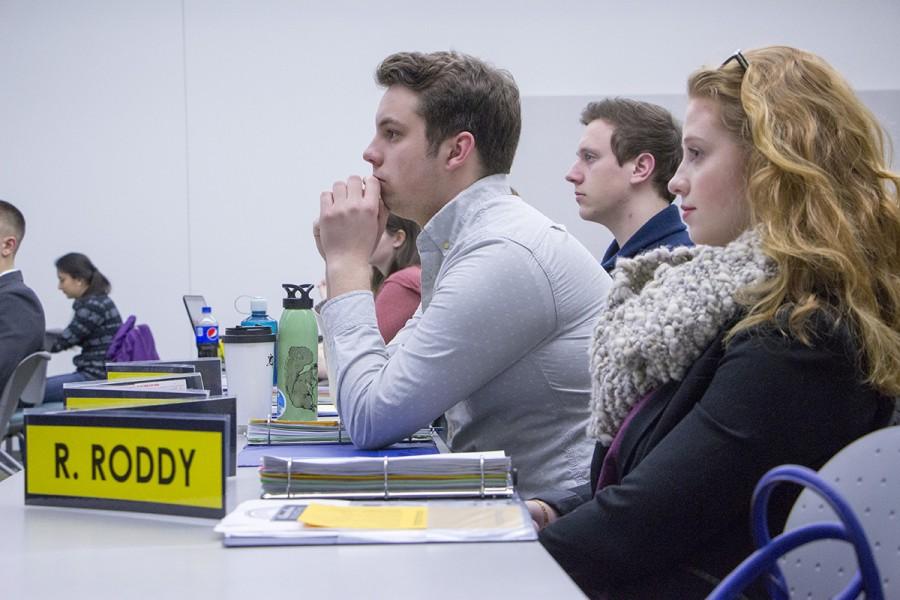 Senator Ethan Fuhrman, a member of the vacancies committee, explains how Senate elects officers during mid-session.

UW-Eau Claire students can participate in the elections held every April to elect senators for the following academic year, but during mid-session the Vacancies Committee fills vacant positions with interview and deliberation processes, Senator Ethan Fuhrman, a committee member, said.

During deliberation the committee considers how applicants would best represent the student body in underrepresented areas, Fuhrman said. An example Fuhrman gave was first-year students, four of which were appointed last Monday.

“There are not set standards by which we select our candidates,” Fuhrman said. “We usually primarily look at experience in issues pertaining to student governance.”

This could include previous involvement with Senate as well as high school student government, Fuhrman said.

According to the application document, applicants write responses to questions asking what characteristics they have that are of value to Senate and the university issues or concerns they would explore if appointed.

There’s no correct answer, President Wrasse said after sharing how he ranked the characters. It’s a chance for them to become comfortable in the interview as they talk through their decision revealing a sense of who they are, Wrasse said.

During the deliberation process Wrasse said the tie-breaking question between candidates is who can provide new perspectives. He said he was disappointed not to receive applicants from student groups who have voiced opinions about the handling of budget cuts, multicultural issues and which programs are being cut.

“I think we had excellent candidates across the board,” Wrasse said, “but I would encourage anyone who has a critique of the system of the process to try and change it from within.”

In other Senate news
Director of the Intergovernmental Affairs Commission Katy McGarry introduced the legislative priority summary outlining what issues the commission plans to engage this semester. The spring 2016 priority summary is comparable to the previous semester’s, McGarry said.

The summary outlines seven areas IGA and Senate plan to pursue this semester:
-Continue supporting The Confluence Project
-Involvement in the first phase of the recreation complex to be built on Menomonie Street
-Continue student representation in the Garfield Avenue Project, which plans to better integrate views of the Chippewa River on lower campus
-Encourage a system requiring landlords to get annual property inspections
-Advocate progress with the new resident hall plan
-Working with students of diversity groups and Office of Multicultural Affairs to increase enrollment of students of color to 20 percent under Chancellor Schmidt’s EDI Initiative
-Promote mental health advocacy on campus

Director of Academic Affairs Mathew Riedel said he’s glad to see a variety of projects IGA plans to focus on this semester.

“I do like that we have a multitude of different levels of projects working with different audiences and partners,” Riedel said.

These plans aren’t set in stone, nor are they the only projects IGA will be working on, McGarry said. Senate unanimously passed the resolution.