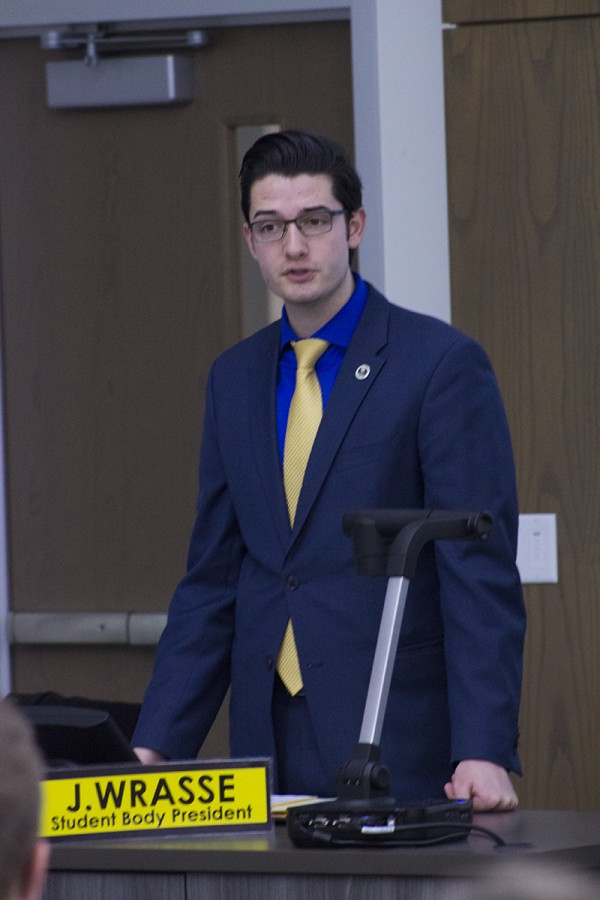 President Jake Wrasse highlighted the details of his and Vice President Jordan Mabin’s trip to D.C during the first Senate meeting of the semester on Monday.

Wrasse and Mabin visited Washington D.C. along with about 20 other student representatives from the UW­ System from Jan. 10-­14.
During the president’s report Monday night Wrasse highlighted discussion points from their D.C. visit.

On the topic of college affordability, Wrasse said the other campus representatives treated the topic with concern and largely agreed on the importance of college being a sustainable investment in the future.

The senate discussed a popular idea called institutional risk sharing, which is intended to strengthen college affordability, Wrasse said. Although it doesn’t have any legislation as of yet.

Wrasse said the idea looks to “disincentive” universities that provide loans to students at risk of defaulting on their loan or not graduating.

“Institutional risk sharing looks at student loan debt and says that if somebody is defaulting on their loans, it’s not just the student’s fault,” Wrasse said. “It is in part the fault of the institution that accepted them knowing that perhaps they were at high risk for default.”

Wrasse said he thinks this makes some sense, but doesn’t want to leave valued demographics ignored, such as first generation students, students of color and non­traditional students.

There’s a problem, Wrasse said, in looking at who’s least likely to pay their student loan debt because these students should still receive the opportunity to afford the investment of higher education.

“It’s really going to be key,” Wrasse said. “This is where we have the best chance of making a difference on issues that don’t have huge national support and outcry.”

Transitioning to campus safety issues, on the topic of sexual assault, the senate is creating a federally funded position that would serve as a sexual assault liaison between the university and community, Wrasse said.

Victims of the assault could turn to the liaison as a resource for advice and to explore what their next options would be within their community, Wrasse said.

Although a federally funded campus liaison position could have positive results, Wrasse said the UW system student representatives weren’t impressed by the idea of moving this process off campus.

Still on the topic of sexual assault, but at the state level, Wrasse mentioned a bill introduced by Wisconsin Representative Joan Ballweg that aimed to prohibit the issuance of citations to an intoxicated and underage individual who called the police in concern of their safety.

In other senate news

Senate introduced the constitution for student organization McIntyre Library Student Advisory Board. Its purpose is to give students a voice in decision making processes involving the library. Senate will vote on the constitution next week.