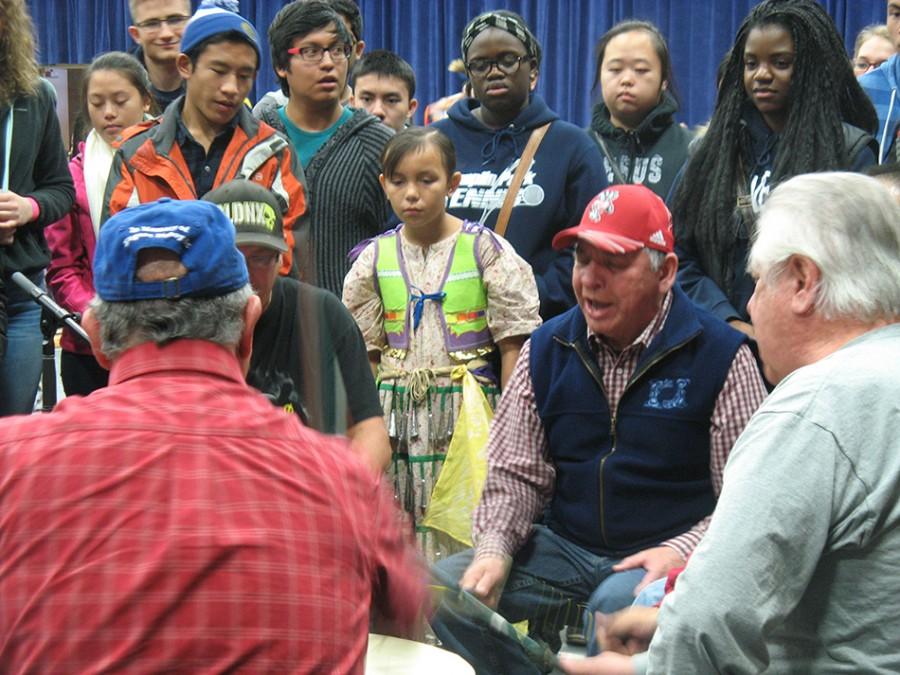 The Badger Singers singing group performed while college mentors and their mentees from Blugold Beginnings and students from College Possible out of the Twin Cities looked on at the powwow in Zorn Arena Nov 7.

For some, like Bill Cadotte from Lac Courte Oreilles, attending powwows is a lifestyle.

His children grew up going to powwows, Cadotte said, when he used to travel all over the country on weekends to perform at them with the Badger Singers, a singing group he said he has been a member of for about 40 years.

Cadotte performed with the Badger Singers at the UW-Eau Claire powwow last Saturday in Zorn Arena. More than 500 people attended the event sponsored by the Inter-Tribal Student Council. The Ho-Chunk and Ojibwe were the two main nations represented.

Cadotte said the Badger Singers like to come up with new songs often and songs performed at powwows travel around the country. For example, a song first played in Eau Claire could be heard on the East Coast in a few years. Cadotte also said songs are naturally occurring.

“Sometimes you don’t know where they come from,” Cadotte said. “Sometimes they come to you in your dreams and it’s your job to keep them alive.”

The drums the singing groups perform with often have a history specific to members in the group. Cadotte said the drum used by the Badger Singers was used by the Thundercloud Boys of the Ho-Chunk Nation and belonged to his cousin before he passed away.

The drum was then remade by the Thundercloud Boys, keeping its Ho-Chunk characteristics, to give back to his cousin’s family, the Thundercloud family. The family has since held a ceremony to give the drum to Cadotte to use with the Badger Singers.

Robert Blackdeer, the arena director for the event, performed with a different singing group called Blackdeer. Robert Blackdeer said he made the drum his group performs by teaching himself.

The drum is an important part of Native culture, Blackdeer said, because it’s looked upon as a human being and has the power to heal.

“Music helps people and heals them in a sense,” Blackdeer said. “And the drum sounds like a heartbeat.”

Not only were those of indigenous descent dancing to the music of the Native singing groups at the powwow Saturday in Zorn Arena, but so were non-Native students of UW-Eau Claire.

Freshman Katheryn Jakubic attended the event with friends because it seemed like an opportunity to learn more about Native American cultures.

“I liked how they involved us and let us partake in their traditions,” Jakubic said.

Mark Denning, the Master of Ceremonies for the event, encouraged everyone who attended the powwow to dance, take pictures and make themselves a part of the gathering. Nearing the end of the first half of the powwow Denning brought even the reluctant Eau Claire students down from the bleachers to participate in a native dance.

Denning said he encourages everyone to participate in the dance instead of just observing because engaging in the hands-on activity can offer a greater lesson. He said this willingness to share his culture came from his parents and grandparents.

“They thought that our culture was really beautiful and so many people never got to experience it,” Denning said.

His desire to share the experience is also Denning’s way to reciprocate the inclusivity student’s showed by attending the event.

“They themselves have become inclusive,” Denning said. “They are a part of this powwow as soon as they step in the door.”

For Denning, emceeing and dancing at powwows is how he supports his family and he isn’t the only one, Denning said. For some of the vendors selling homemade goods like jewelry, clothing and blankets, the profits they make at powwows and other events is how they make a living.

Eau Claire is one of the only universities left that lets them bring in and sell their own indigenous food, Denning said. Most schools require their catering services be used so they can make a profit.

Denning said he appreciates the university and Student Senate for supporting diverse events and students who attended.

“This university celebrates diversity in such a large, amazing way,” Denning said. “Other universities aren’t doing that.”

It’s important for students to have access to this diverse learning, Denning said, because it can help shape a life.