Project design team said a safer, more connected campus is a primary focus for the redevelopment 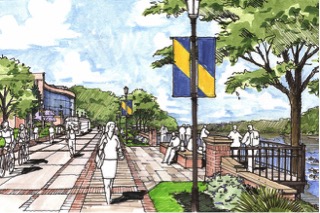 The Garfield Project plans to create gathering spots for students where they can enjoy the views of the Chippewa River yet still be connected to the university’s urban-type feel.

UW-Eau Claire’s website boasts Eau Claire as the most beautiful campus in Wisconsin, but a team of designers have unveiled consolidated plans to heavily reconstruct Garfield Avenue to better integrate the Chippewa river with lower campus.

The project planners held an open house Oct. 15 to garner student input on design ideas. The architects followed up with another open house Tuesday to go over project goals and ideas from the previous open house.

Jake Wievel, a site designer, said he and his design team are primarily focused on creating and gathering activity spaces similar to the university’s campus mall.

Wievel said addressing problems the public finds evident is something the team focused on when returning to work on the project. He said one of the concerns he’s heard is the safety of students coming off the footbridge.

“Bikes traveling down the hill at high speeds and students having to make sharp turns at the bottom of the hill is an aspect we’re focusing on minimizing with the project,” Goodwin said.

“Widening the turn and steepness of the hillside is what our site design team has emphasized.”

Goodwin and Wievel said the first visit to campus was a time for them to listen to what people had to say. They said they gathered a lot of suggestions and ideas.

“The public wants an outdoor classroom, an overlook of the area where students can gather in order to read and study,” Goodwin said. “There is the possibility of an outdoor eating space in which a food cart would be brought to accommodate students acting as an outdoor dining service.”

Another project concern is the parking space dilemma. The area surrounding Garfield Avenue and Putnam Park contains a parking lot reserved for students living on lower campus, which will be replaced with an outdoor classroom.

Goodwin said there will be parking reserved for students living in the residential halls located either on upper campus or across the foot bridge next to Haas Fine Arts Center.

“The parking situation is not completely finalized because construction is set for the 2017-2018 construction season. So we haven’t really got to the phasing of developing how the area will look,” Goodwin said.

After the project is complete, the project team said they envision the image and identity of the university to be improved in ways that will bring the campus much closer to the community in all ways, shapes and forms.