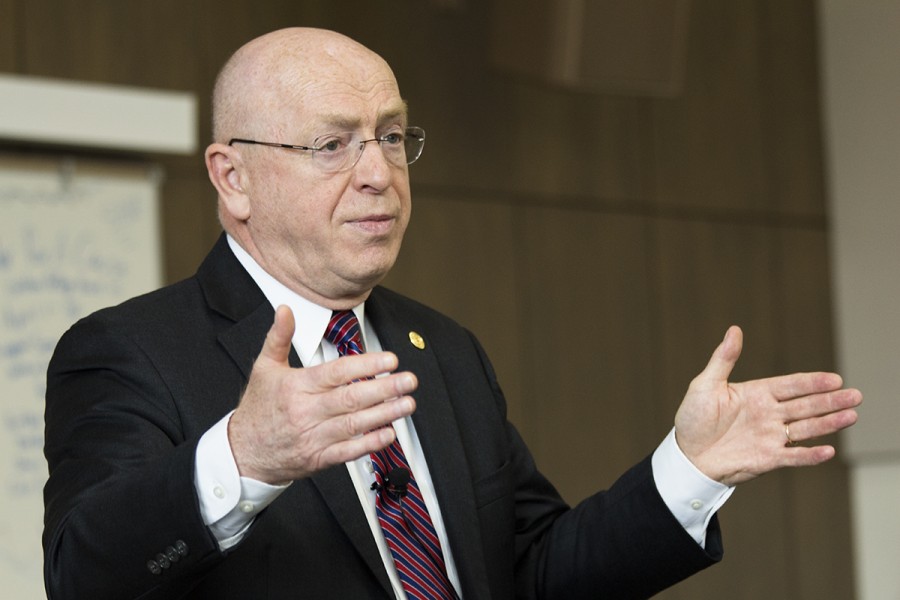 Ray Cross, UW System president, speaking at an open forum last spring on campus. He visited Eau Claire Wednesday for a discussion on what the UW System can do to help the current state of Wisconsin.

UW System President Ray Cross came to campus Wednesday and heard input from community members regarding the state’s major issues and what role the UW System should play to “help Wisconsin address its most critical challenges and opportunities.”

This session was part of a series of 14 strategic planning listening sessions.

Many of the discussions were born from two topics the Chancellor’s office introduced, including major challenges and opportunities Wisconsin faces today and the role the UW System should play to help address them.

Each table had a facilitator who served as a vocal representative. After about 20 minutes, table-based discussion ended and Cross and a few others would walk amongst the attendees and hand the microphone to a facilitator to discuss their group’s thoughts on the topic.

The UW System created and embraced the educational philosophy dubbed the Wisconsin Idea in 1904. It describes how UW-education can and should improve people’s lives beyond the classroom through teaching, research and public services.

Cross said he gathered a lot from the Eau Claire hearing.

“(Wednesday’s group) made it clear the university can do a better job communicating with prospective students, the community and the legislature about what value it brings,” Wrasse said.

The “Individual Reporting Sheet,” sent out by the Chancellor’s office as part of the RSVP for the event, included a categorical checkbox to indicate whether the respondent was a current Eau Claire student, faculty or instructional staff member, academic or university staff member or administrator.

These sheets were collected after the event, with responses and comments to the two topics, and Cross told the crowd the responses would be submitted along with other UW locations’ responses into a data analytics system. The system will look for themes that run across individual comments.

“Our strategic analysis starts with recording those themes and determining what we can do about them,” Cross said. “I hope you will hear some of these things in the final strategic plan.”

Senior journalism student Thomas Hensen said he liked the way Cross and the UW System approached these issues by going to the people who are being affected. He said he’s unsure how the analytics can be applied and make a difference.

“I’m not too optimistic (about results) based on recent events,” Hensen said. “I don’t know what they’ll find or what they’ll do to make big changes.”

Jose Alvergue, assistant professor of English, attended the event and said it’s not his job to know how to fix the problems the UW System is facing. He said that’s something the UW System administrators should know.

“That’s why we have administrators who make so much money, they should know,” Alvergue said. “To outsource it to us where we’re really sharing quite a lot emotionally and intellectually and then take that around and turn it into their language is always insulting.”

He said it was refreshing to hear opinions from those other than his colleagues. As faculty, disregarded input is something he said he’s used to.

“I’m always disheartened when there’s thoughtful conversation that tries to get wrapped up into sound bites that can be turned into really easily consumed bits of information,” Alvergue said. “The conclusion ‘we’ll correlate all of your data and all of your thoughtful remarks’ into some sort of data subset takes the humanity out of it.”