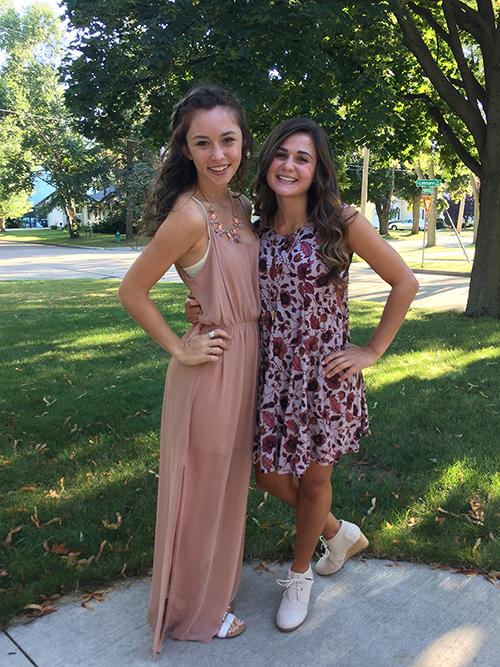 Maddy Mahoney and her friend spend a summer day outside.

During her freshman year of high school, Maddy Mahoney suffered a migraine that would drastically alter her way of life.

Mahoney, currently a sophomore special education major at UW-Eau Claire, was born with an arachnoid cyst in the left frontal lobe of her brain- a relatively common condition in which a sac of cerebrospinal fluid develops inside the brain, occasionally causing severe headaches, even seizures.

Even so, Mahoney managed to live a normal, healthy life. That is, until one day after soccer practice.

“We were doing a lot of headers at practice,” Mahoney said. “I went home with a migraine that lasted a week, but that week turned into two weeks, which eventually turned into two months.”

Mahoney later discovered that her migraine was actually something much more serious. She had developed a condition called hydrocephalus, most commonly diagnosed in infants.

Hydrocephalus occurs, Mahoney explained, when the arachnoid cyst ruptures, causing the cerebrospinal fluid to surround the brain. This ultimately caused a nine-centimeter midline shift in her brain, meaning her brain had shifted completely from the center of her skull to the right side.

“I was in the hospital for two weeks,” Mahoney said. “I suffered memory loss, a traumatic brain injury and minor brain damage to my right hemisphere, which caused me to get angry easily and have trouble telling stories in order.”

Though Mahoney managed to make a full recovery, she was diagnosed with a learning disorder and continues to struggle during her daily life due to “paralyzing” migraines that occur three to four times a week.

“Ultimately, this experience is why I decided to become a special education major,” Mahoney said. “I was so used to learning one way, but everything changed and I was put into a lot of special education programs.”

Throughout her struggles, Mahoney explained how she learned perseverance and the importance of speaking up for herself.

“I learned how to give myself a voice,” Mahoney said, “ I realized that people tend not to believe disabilities they can’t physically see, so explaining my condition becomes a difficulty.”

She said the condition taught her a powerful lesson: everyone has their struggles, even if they aren’t visible. You never know what’s going on in someone’s head, she said.

“Everyone has a story for why they act the way they act,” Mahoney said. “You just have to give them a chance.”