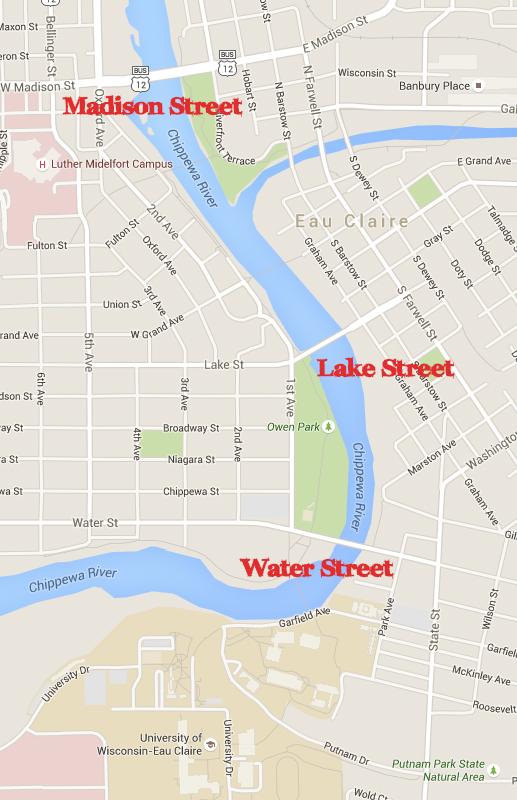 Last year junior Alec Sommer and his roommates had fun when they would walk down Water Street with their friends. Sommer lived on Water Street then and found it easy to get around the area.

Now, living arrangements have changed for Sommer and he’s feeling the effects early this semester.

Sommer is not thrilled about the Water Street bridge construction project and the detours it’s forcing onto him.

He said traveling to his friends’ houses was easier prior to construction and having to commute to the Lake Street bridge has become a bothersome chore, especially when preparing for a night out on Water Street.

“It’s like a Russian Roulette for who has to leave their car over there then walk back the next day to get it,” Sommer said. “We now have to find someone with a car who will drive over to Lake Street bridge or we don’t go at all.”

Sommer and his roommates are not the only ones affected by the replacement of the nearly 70-year-old bridge.

Chris Oullette, regional communication manager for the Wisconsin Department of Transportation-Northwest region, said approximately 17,000 motorists now navigate a different way to get where they need to go.

“The designated detour route takes motorists to Lake Street bridge,” Oullette said. “We figure locals might find other ways to travel as well.”

Oullette said the DOT’s bridge project will be nearly 700 feet and have improvements such as decorative street lighting and accommodations for bikers and pedestrians. These include a dedicated five-foot bicycle lane, higher railings and eight-foot raised sidewalks in each direction.

She said biking security has been a major concern for many residents and they should feel safe to bike across this bridge once it’s opened.

In the meantime, the pedestrian underpass underneath the bridge is also closed.

Oullette said students must avoid getting close to the bridge or running across it at night. She said some “bridge closed ahead” and traffic control signs have been stolen. For the public’s safety it is necessary for those signs to be present, she said.

“You cannot walk, bike or drive a car on the bridge. We are in the process of dismantling the bridge deck right now and it’s dangerous,” Oullette said. “The signs are there for a reason, to warn people and motorists to stay off the bridge. We want to keep everyone safe.”

Dave Solberg, city engineer for city of Eau Claire public works, said the Madison Street work is basically an extensive maintenance project. The city is not replacing anything major, but instead replacing joints that help give the structure strength and doing repair to the sidewalks and curbs, he said.

The project costs $547,000, but Solberg said the cost is well worth it considering the costs of major changes later.

“An ounce of prevention is worth a pound of cure when keeping bridges maintained,” Solberg said. “If the bridge wasn’t properly maintained, it could cost in excess of $7 to $9 million.”

Solberg is anticipating construction to last until the end of October, he said, and while there are no plans for the bridge to completely shut down to traffic, there will be minor delays during the peak hours in the morning and afternoon.

He said the city didn’t want to start construction on the Madison Street bridge until fall 2016, but last spring the backwall began to crumble and debris started to fall on the pedestrian and bike trail underneath the bridge.

“We decided to move it up because of public safety,” Solberg said. “We especially didn’t want to do it with Lake Street construction happening so we waited.”

Madison Street is one of the busiest streets in Eau Claire and with an estimated 20,000 cars traveling across the bridge each day, the city decided it’d be best to handle the situation now before a major overhaul was required, Solberg said.

The Madison Street bridge faced reconstruction in 1976 as a new concrete deck was placed on the previous pile foundations.

With the continuation of routine maintenance cycles, Solberg said the current work is designed to prevent deterioration and there’s “no reason it couldn’t stand as is for another 50 years after this work.”