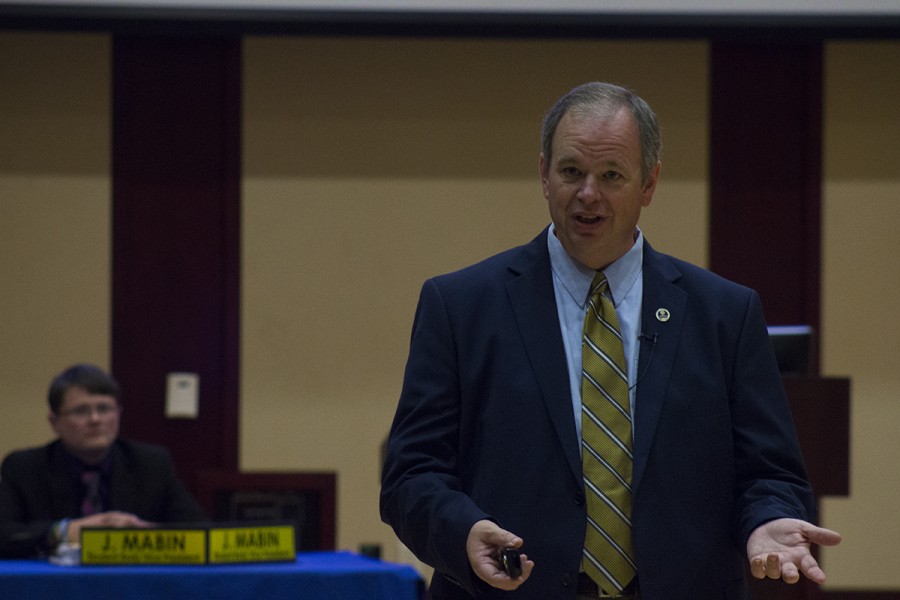 The first Student Senate meeting of the year began with a presentation from Chancellor James C. Schmidt on the areas of the university the freshly finalized budget cuts will affect.

Schmidt said he feels like he spent his summer in a conference room cutting $12.2 million. But he said the rush of students making their way back to campus reminds him why he does his job.

“It is absolutely because of the possibility of you receiving the kind of transformative education that you deserve,” Schmidt said.

While making cuts, Schmidt said he held on to the university’s four principles, which he refers to as “100-90-50-20.” The goals include:

– 100 percent of students graduating with at least one high impact experience. For example, research, studying abroad and internships.

– Retaining 90 percent of the freshmen.

Although graduating students in four years hurts the university economically, it what’s best for the students, Schmidt said.

The same is true for studying abroad. When sending students abroad, Schmidt explained the university is collecting less tuition from students if the students pay to their host campus.

Changes in the university

With $12.2 million to cut over the next two years, Schmidt said 36 percent, or $4.3 million, was cut from classroom instruction. This includes 69 full-time equivalent positions from the classroom.

A total of 168 full-time equivalent positions will be cut, which translates to over 200 people.

The remaining 64 percent of cuts, or $7.7 million, falls under the category of other, according to his presentation. This includes areas like senior administration, non-academic positions and consolidated services.

This leaves a remaining $200,000 still left to be cut. Then add another $390,000 to the deficit due to a tuition shortfall of 62 full-time equivalent students.

Deciding not to go back and distribute nearly $600,000 in more cuts, Schmidt said the dollars can be made up with increased student retention.

Consolidated services accounted for $4.2 million of the savings. The mission is to minimize positions by utilizing cross-trained employees, Schmidt said.

Schmidt said it’s a means to efficiency he would have wanted to pursue even without budget cuts. It’s a way to save money and give back to the students, Schmidt explained.

One consolidated service is the One-Stop Student Services Center. It brought services like financial aid, cashier, housing contracts, dining contracts and parking together, while saving the university $344,000. One-Stop resides where the 24-hour lab used to.

A Chancellor’s Roundtable will take place at noon on Wednesday, Oct. 23 in the Dakota Ballroom of the Davies Center. The topic will be “class sizes and what that means for the 4 year graduation rate.”