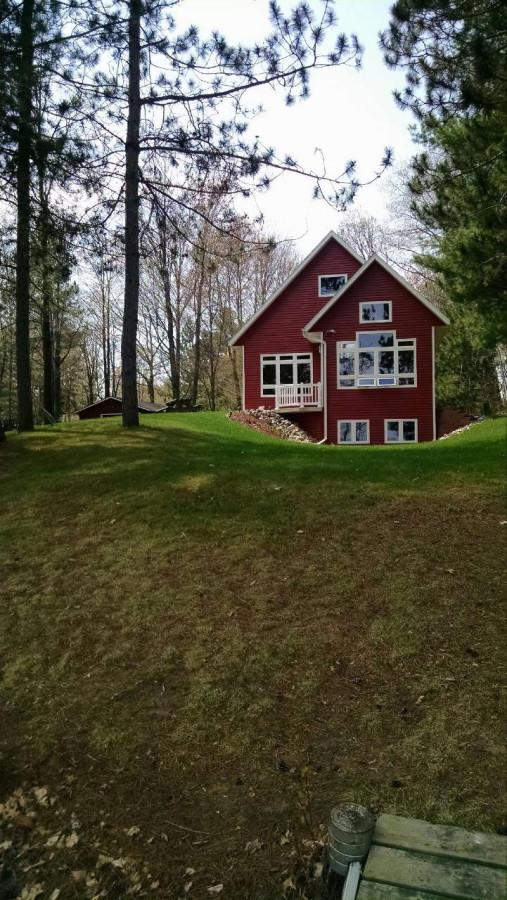 Nass’s cabin which was built three years ago in Holcombe, Wisconsin on Lake Holcombe is his summer getaway spot.

Every summer Robby Riley and his family make the trek from their hometown in Fairmont, Minn., up to the cabin in Eagle River that his grandparents built nearly 50 years ago with one thing in mind: relaxation.

But not only Riley enjoys getting away for a few days for some fun in the sun. Every summer, families travel up to the northwoods to their cabins, including multiple UW-Eau Claire students.

Riley, a senior at Eau Claire said his family makes at least one week-long trip up to their cabin every summer to take a break from their busy schedules on the Chain O’ lakes in Eagle River, which he said offers some of the best musky fishing around.

Riley’s cabin, which he said is located in a densely wooded area on the lakefront, allows him and his family the opportunity to use their speed boat, canoes, kayaks, pontoon and floaties to the fullest. He said along with their fun on the water, his family also uses their land as hunting land as they have multiple tree stands located in the woods.

Despite the lake, which is usually highly populated in summer, Riley said his cabin is pretty hidden and quiet and allows prime relaxation.

“Our land is pretty heavily wooded and has a ton of trails for walking or snowmobiling in winter,” he said. “It definitely is off the beaten path but not too far away from town which is fine by me.”

Although he enjoys the opportunity to get away from the city life for a few days at a time, Riley said the best part of his cabin is just being able to relax with his family around a fire with a beer in his hand.

Relaxation on the lake

Only an hour drive from Eau Claire to Holcombe offers Senior Erica Lindall a quick getaway from school, work and responsibility.

Located on Lake Holcombe, Lindall said her family’s cabin is the ideal spot for anyone who enjoys some time in the water to soak up some rays.

Although Lindall said the lake is pretty populated in the summer, the location of her cabin at the end of a dead end road keeps it fairly secluded and peaceful.

“Other than one house that is pretty close to ours, our land is pretty hidden,” she said. “It’s a nice place where my family can all go for a mini vacation or get-together.”

However, rather than just hiding out or relaxing, Lindall says she and her family enjoy spending their time away from it all on the lake boating, tubing, floating and just taking in the warm summer weather on the water.

Just across the lake from Lindall resides a newly built cabin that junior Tyler Naas and his family constructed only three short years ago.

Naas, who is originally from Bloomer, said the proximity of his cabin from his hometown and Eau Claire is what makes it such a great getaway.

“It’s close enough where you don’t need to plan a trip,” Naas said. “You can just go for a spur of the moment type of thing.”

The cabin, which is located on a 1.5 acre lot at the end of a dead end road, allows Naas and his family the ability to a quick getaway for relaxation. But it’s also a prime spot during holidays like the Fourth of July.

Naas said you can’t fish or hardly get on the lake at this time of the year because boats are everywhere, which makes for a fun time on what he calls a “party lake.”

Although Naas said the lake can get crowded at times, he said the recently new cabin is a quiet out-of-the-way place he can go to whenever he needs to get away and just have some time to himself or with the family.

“I can come up here anytime and do some quiet fishing for panfish at any time,” he said. “But really it’s just a good spot for a fun getaway with my friends and family.”